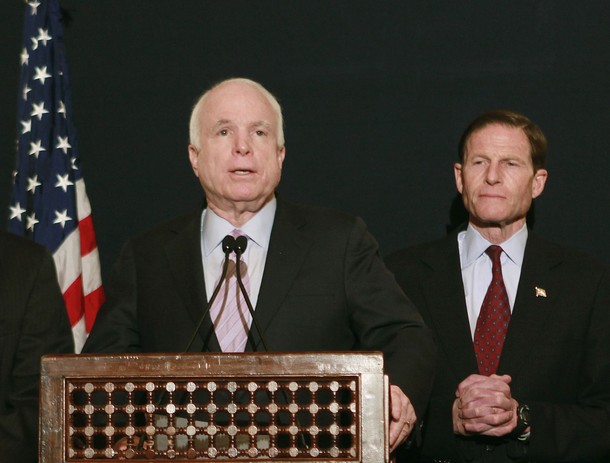 Sen. John McCain said that U.S. relations with Egypt are changing but stressed that the two countries “must remain friends,” speaking at a business conference in Cairo on February 20. McCain said members of the SCAF assured him that they are working “diligently” to resolve the crisis over NGO investigations and expressed “guarded optimism” that the criminal charges filed against the U.S. non-governmental organizations will be resolved “fairly soon.”

2) The legality of Egypt’s recent People’s Assembly election has been called into question by the Supreme Administrative Court. On February 20, the court referred several articles of the parliamentary elections law to the State Council to determine whether the clause allowing party members to run for the one third of seats reserved for individual candidates is constitutional. The State Council will then request a ruling on this issue from the Supreme Constitutional Court. The majority of individual candidacy seats are occupied by members of the Muslim Brotherhood’s Freedom and Justice Party and the Salafist Nour Party. [al-Ahram, English, 2/21/2012]

3) The Brotherhood’s Freedom and Justice Party condemned the "failure" of the military-appointed cabinet on February 21 and renewed its call for a national salvation government. "Egypt still suffers increasing economic and security crises which confirms the failure of the current government," the party said in an official statement.  Maintaining the cabinet of Prime Minister Kamal Ganzouri "shows a clear desire to transfer more crises to any future government," according to the statement. [AFP, English, 2/21/2012]

4) FJP head Mohamed Morsi said that the Brotherhood’s political wing will announce which candidate the party will support only after the registration period for the presidential elections closes in April. An FJP spokesman, Ahmed Subei, had earlier stated that the party would announce the candidate it will back by February 21, after a two-day deliberation. However, according to Morsi the decision will not be made before April 18. [al-Ahram, English, 2/21/2012]

5) State media reported that the criminal trial of 19 Americans and 24 accused of working for NGOs that “infringe on Egyptian sovereignty” will begin in Cairo on February 26. It said 19 of the 43 defendants are Americans and 16 are Egyptians. The rest are Germans, Palestinians and Jordanians. The Americans work for four U.S.-based groups NGOs: IRI, NDI, Freedom House and a group that trains journalists. Only seven of the Americans are in Egypt, and all have been barred from travel. Some have sought refuge at the American Embassy in Cairo, including Sam LaHood, who heads IRI’s Egypt office and is the son of U.S. Transportation Secretary Ray LaHood. [AP, English, 2/21/2012]

6) Sen. John McCain said that U.S. relations with Egypt are changing but stressed that the two countries “must remain friends,” speaking at a business conference in Cairo on February 20. McCain said members of the SCAF assured him that they are working “diligently” to resolve the crisis over NGO investigations and expressed “guarded optimism” that the criminal charges filed against the U.S. non-governmental organizations will be resolved “fairly soon.” [VOA, English, 2/21/2012] [Washington Post, English, 2/20/2012] [al-Youm al-Saba’aa, Arabic, 2/21/2012

7) The chief prosecutor in Hosni Mubarak’s trial stated in his closing remarks that the former president should be given the death penalty for the killings of protesters in last year’s uprising. [AP, English, 2/21/2012]

8) Interior Minister Mohamed Ibrahim rejected calls for a “purge” of senior officers appointed during the Mubarak era and reiterated a ban on police officers wearing bears. Ibrahim has announced the formation of a commission tasked with restructuring the ministry in a way that "suits the nature of police work and serves the public interest." [al-Ahram, English, 2/21/2012]

9) Last week a group of police officers announced via Facebook that they would grow their beards in accordance with their interpretation of Islam, in a campaign supported by Salafi groups. The campaign has received support from ultra-conservative Salafist groups in Egypt. Nader Bakar, the official spokesman for the Salafist Nour Party, condemned the ministry’s policy banning beards for officers: “The ministry of interior cannot fire these officers, or even transfer them to other departments, because this is against Islamic rules and basic human rights,” Bakar said on February 19. [al-Ahram, English, 2/21/2012]

10) On February 19, Finance Minister Momtaz al-Saeed said that the government expects to sign a $3.2 billion loan agreement with the IMF next month and will receive one-third of the funds immediately upon signing. The European Union (EU) is considering lending Egypt up to 500 million Euros ($660 million), dependent on Egypt’s negotiating an agreement with the IMF. [al-Ahram, English, 2/21/2012]

11) The Brotherhood’s Freedom and Justice Party issued a statement on February 21 rejecting the government’s acceptance of a loan from the International Monetary Fund. "Looking for painkillers to fix economic problems raises many questions," said the FJP. The statement urged the government to rely on domestic financial resources "before resorting to foreign loans."  [AFP, English, 2/21/2012]