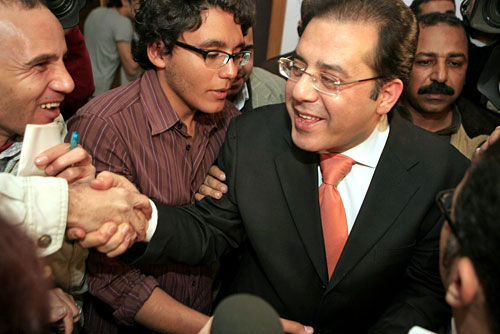 Ayman Nour claims that the SCAF has issued a decision allowing him to run in the upcoming presidential election. His political rights have been suspended since 2005, when he was convicted of forging signatures for registration of the Nour Party in a case that was broadly condemned as politically motivated.

1) Gamal Heshmat, a member of the Muslim Brotherhood’s consultative Shura Council, denied reports on March 28 that the Brotherhood is planning to back their member and parliamentary speaker Saad al-Katatny in the presidential race. According to Heshmat, the March 27 Shura Council meeting did not consider any names for the presidential elections and only discussed whether to officially back a candidate or not. A decision has been postponed until March 29 due to lack of consensus. Meanwhile, former Brotherhood spokesperson Mohamed Mahdi Akef stated, during a televised interview on the CBC satellite channel Tuesday evening,  that the Brotherhood might consider changing its position on backing former member Abdel-Moneim Aboul Fotouh.  [al-Ahram, English, 3/28/2012]

2) Ayman Nour claims that the SCAF has issued a decision allowing him to run in the upcoming presidential election. His political rights have been suspended since 2005, when he was convicted of forging signatures for registration of the Nour Party in a case that was broadly condemned as politically motivated. [al-Masry al-Youm, Arabic, 3/28/2012]

3) People’s Assembly Speaker Saad al-Katatny has been elected chairman of the constituent assembly. The assembly held its first meeting on March 28, attended by only 75 out of 100 members, with a number of liberal members noticeably absent. The Wafd Party announced that its representatives are boycotting the assembly and at least 20 members have stepped down so far. [al-Masry al-Youm, English, 3/28/2012] [al-Ahram, English, 3/28/2012]

4) Field Marshal Tantawi held a meeting with the heads of 18 political parties and two MPs to discuss the controversy over the constitution and urged them to reach an agreement on the makeup of the assembly. [al-Masry al-Youm, English, 3/28/2012]

5) The State Council Administrative Court set 10 April as the date to rule on lawsuits challenging the validity of the constituent assembly. In an attempt to discredit the lawsuit, the FJP’s newspaper ran a story on its front page claiming that the two lawyers leading the legal case, namely Shawky al-Sayed and Mortada Mansour, have a track record of finding legal loopholes to benefit former Mubarak cronies. [al-Masry al-Youm, English, 3/28/2012] [al-Masry al-Youm, English, 3/28/2012]

7) A senior army official estimated that Egypt’s foreign reserves will fall by roughly a third – from $5 billion to $10.4 –by the end of June. Egypt’s reserves stand at $15.72 billion, according to central bank data in early March, a sum equivalent to about three months worth of imports. [al-Ahram, English, 3/28/2012]

8) A SCAF representative defended the military’s spending and financial interests, saying it only receives minimal public funds. Major General Mahmoud Nasr said military spending makes up just 5 per cent of the government’s budget, less than half the proportion in other countries, with the army covering the rest of its expenditures itself. According to Nasr, Egypt’s government spends twice as much on education as on the military, he said. Nasr also defended the military’s economic enterprises, saying they allow the armed forces to maintain a six-month strategic stock of basic commodities in case of any crisis. [al-Ahram, English, 3/28/2012]

9) Al-Ahram reported that a high-ranking Israeli delegation arrived in Cairo recently to discuss the release of Bedouin Israeli Ouda Tarabin in exchange for 63 prisoners. Tarabin has been held in Egypt on espionage charges for the past 12 years. In the past it was reported that Tarabin was meant to be released as part of the Ilan Grapel deal, but this did not materialize. [YNet, English, 3/28/2012]