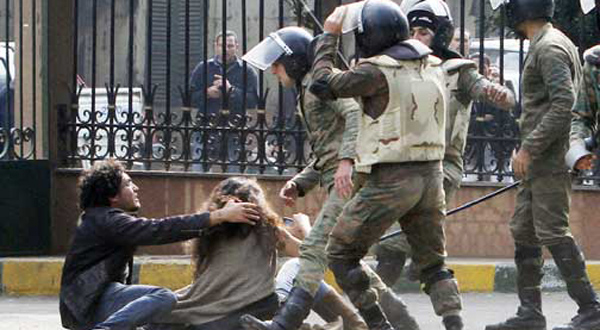 At least 173 “Occupy Cabinet” protesters were injured and two more killed as they clashed violently with military police trying to disperse a sit-in outside of the Council of Ministers Building. After protesters refused to vacate Qasr al-Aini Street, security forces used force to break up the sit-in with rocks and fire houses.

1) On December 14, at least 60 protesters suffered severe food poisoning outside of the Cabinet building – a number of whom were hospitalized – after an unidentified woman distributed Hawawshi (spicy minced meat) sandwiches at the sit-in.  The April 6 Youth Movement and other activists have claimed that the tainted sandwiches were deliberately contaminated in an effort to clear the three week-long sit-in.   [EgyptSource, English, 12/15/2011] [al-Ahram, English, 12/16/2011]

2) At least 173 “Occupy Cabinet” protesters were injured and two more killed as they clashed violently with military police trying to disperse a sit-in outside of the Council of Ministers Building. After protesters refused to vacate Qasr al-Aini Street, security forces used force to break up the sit-in with rocks and fire houses. Several soldiers joined men in civilian clothes on surrounding rooftops, where they were observed throwing rocks, Molotov cocktails, furniture and piece of glass into the crowd below. Protesters used mock coffins — representing 43 killed in clashes last month — as shields. [Al-Masry al-Youm, Arabic, 12/16/2011] [al-Ahram, English, 12/16/2011] [The Daily News Egypt, English, 12/16/2011] [al-Ahram, English, 12/16/2011]

3) The April 6 Youth Movement sent a letter of "final warning" to the SCAF and Prime Minister Kamal Ganzouri’s government, demanding an immediate end to the crackdown outside of the Cabinet headquarters. The letter also holds the SCAF fully responsible for all casualties resulting from the clashes and demands an immediate investigation as well as the resignation of all officials implicated in the violence. [al-Dostor, Arabic, 12/16/2011]

4) The Muslim Brotherhood’s Freedom and Justice Party (FJP) issued a statement urging the military to bring an end to the clashes outside of the Cabinet building: “We urge SCAF to immediately stop the violence, especially the plain-clothed individuals who are throwing stones from atop buildings, investigate the matter and present it to public opinion.” [The Daily News Egypt, English, 12/16/2011]

5) A member of the Free Egyptians presidential council, Ahmed Said, condemned military’s use of force, saying, “The SCAF has to protect the revolution instead of escalating violence and cracking down on freedoms.” [The Daily News Egypt, English, 12/16/2011]

6) Although official results are not expected until December 17 or 18, preliminary results indicate that the Freedom and Justice Party and Salafi Nour Party are leading in six of the nine governorates that voted in the second stage of the parliamentary elections, followed by the liberal-oriented Egyptian Bloc. The FJP’s list-based candidates won in Giza, while the party’s individual candidates are also leading in Giza’s 1st, 2nd and 5th districts. In Sharqiya, the FJP won 45 per cent of the votes for party list seats, followed by Nour with 19 percent. The Wafd Party and moderate Islamist Wasat came in third and fourth respectively. The FJP also came out ahead of the Nour Party in Ismailiya, Menofiya and Beheira, while the Nour Party made a surprisingly strong showing in Suez, where the Salafis won around 50 per cent of the list-based votes. [al-Ahram, English, 12/16/2011]

8) Twenty-five parliamentary candidates in Kafr al-Dawar are protesting the counting process, claiming that the elections were rigged. The candidates are demanding that counting stop and results not be announced. [al-Masry al-Youm, Arabic, 12/16/2011]

9) Four members of the Advisory Council have resigned in protest of the security crackdown on the “Occupy Cabinet” protesters and Mohamed ElBaradei urged the remaining members to step down as well, saying that “every member who remains on the council shares in the responsibility for what happened.”  Aember of the political bureau of the Free Egyptians Party, Ahmed Khairy, was the first to tender his resignation, followed by political analyst Moataz Abdel Fattah, Cairo University political science professor Nevine Mosaad, and IT entrepreneur Ziad Aly. [al-Masry al-Youm, Arabic, 12/16/2011] [The Daily News Egypt, English, 12/16/2011]

10) Responding to comments by Planning Minister Fayza Aboul Naga suggesting that Egypt may need to resume negotiations for a loan, the IMF spokesman confirmed that Egypt has not yet requested a loan from the IMF since initially rejecting a $3 billion financing package in June. [al-Ahram, English, 12/16/2011]