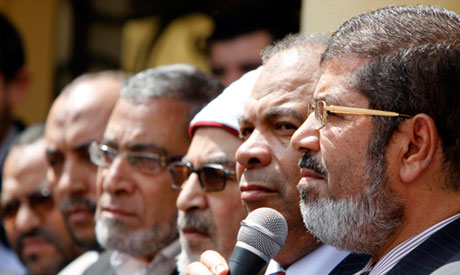 The Freedom and Justice Party (FJP) has rejected a proposal from several revolutionary groups calling for early presidential elections in January 2012. Meanwhile, the National Association for Change (NAC) is calling for nationwide protests to “regain Egypt’s dignity” following the “crime committed near the Cabinet by the military.”

1) Following a massive women’s march in Cairo on December 20 that drew over 20,000 protesters, hundreds of women rallied in Alexandria to protest acts of violence committed by military and security forces against women. [al-Ahram, English, 12/21/2011]

2) The National Association for Change (NAC) is calling for nationwide protests to “regain Egypt’s dignity” following the “crime committed near the Cabinet by the military.” [al-Ahram, English, 12/21/2011]

3) Runoff voting is in progress for undecided individual candidacy run-offs as well as three districts (Menoufiya, Sohag and Beheira) voting for electoral lists after a court ruling ordered a postponement last week. The nine governorates holding run-offs will see competition between 47 candidates from the Freedom and Justice Party (FJP), 36 from the Salafi Nour Party, 3 from the Egyptian Bloc, 1 Wafd Party candidate and 10 independents.  According to semi-official figures released by the High Electoral Commission, the FJP won around 36 per cent of the party-list vote in the second round and the Nour Party secured 28 percent – The two Islamist parties are expected to win around 40 more seats in the runoff voting on December 21-22, out of the 180 total contested in the second round.  [al-Ahram, English, 12/21/2011] [al-Ahram, English, 12/21/2011]

4) The Freedom and Justice Party estimated relatively low turnout of 20 percent in the first day of voting in the runoff round, but predicted higher turnout on December 21. [al-Masry al-Youm, Arabic, 12/21/2011]

5) NDP-affiliated candidates performed better in the second round of voting than in the first, winning an estimated 16.8 percent of the seats as party-based candidates –running on the lists of the Conservative Party, the Egyptian Citizen Party, the National Egypt Party and the Democratic Peace Party. IN addition, 11 former NDP members are competing in the runoff round ending December 21. [al-Ahram, English, 12/21/2011]

7) The Freedom and Justice Party (FJP) has rejected a proposal from several revolutionary groups calling for early presidential elections in January 2012. In a press release, the FJP claimed that the proposal “fails to appreciate the requirements approved by all parties in the Constitutional Declaration – which provides for elections of the People’s Assembly, then the Shura Council [upper parliamentary house], drafting the new constitution, and finally the presidential elections.” [al-Ahram, English, 12/21/2011]

8) The Muslim Brotherhood announced that it will not participate in a planned demonstration “to reclaim Egypt’s dignity” this Friday, December 23, but called on the SCAF to apologize to the victims of recent violence and their families. [al-Masry al-Youm, Arabic, 12/21/2011]

9) A spokesman for the Salafi Nour Party said that the party would respect the peace treaty with Israel: "We are not against the (1979 peace) agreement but we say that Egypt is committed to the agreements signed by the previous governments," Al-Nour spokesman Yusri Hammad said in an interview with Israeli army radio. [al-Ahram, English, 12/21/2011]

10) Free Egyptians leader Naguib Sawiris said that liberal forces will not allow a new constitution to be drafted based on religion and urged Islamists to offer concessions to achieve consensus on the structure of Egypt’s new charter. [al-Masry al-Youm, English, 12/21/2011]

11) State Department Spokeswoman Victoria Nuland rejected accusations that the United States is meddling in Egypt’s affairs. A spokesman for the Foreign Ministry said on December 20 that "Egypt does not accept any interference in its internal affairs," following a December 21 speech by Sec. of State Hillarty Clinton, in which she criticized the actions of Egyptian security forces as showing "systematic degradation" of women that "disgraces the state.” [Reuters, English, 12/21/2011] [al-Youm al-Saba’a, Arabic, 12/21/2011]