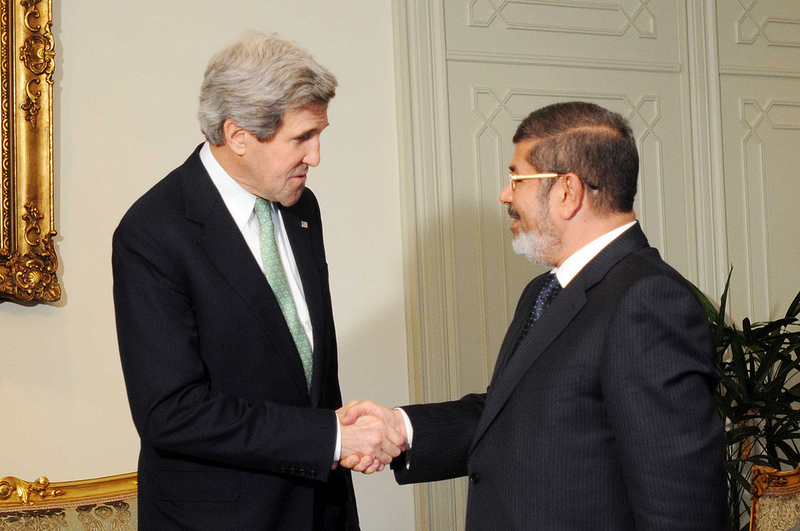 After a lengthy year-and-a-half long trial, Egypt’s court sentenced forty-three Egyptians, Americans, and other foreign nationals to up to five years in prison. The trial, infamously known in local Egyptian media as the ‘Foreign Funding Trial,’ has come to a distressing end and is yet another test for US-Egypt relations, as well as a foreboding warning for the future of civil society in the country.

Twenty-seven defendants, among them fifteen US citizens, were sentenced to five years in prison in absentia. Eleven Egyptians received one-year suspended sentences, while five defendants received two-year sentences, among them Robert Becker, a US citizen and former National Democratic Institute (NDI) employee who was living in Cairo, and fled only a few hours after the verdict was issued.

The harsh verdict stands in stark contrast to the ever-elusive accountability that is missing from Egypt’s courts, and is a key reminder of the judiciary’s unpredictability. Judge Makram Awad, the judge presiding over the NGO trial, has been involved in at least one other high profile case in recent months. He delivered a mere three-year prison sentence to the ‘Eye Sniper,’ a police officer charged with killing protesters. The verdict it is yet another symptom of Egypt’s lack of transitional justice. In this case, it is even more of a concern when the same judge issues harsher penalties to defenders of democracy than to those accused of killing protesters.

In a statement condemning the verdict, NDI described the defendants as “victims of an intergovernmental dispute between the [United States] and the then-Egyptian government.” The unprecedented ruling could serve to further strain US relations with the current government, and has already led to renewed calls to reevaluate US assistance to Egypt. Although the trial began when the Supreme Council of the Armed Forces was in power, President Mohamed Morsi’s government has inherited its after-effects. That same government is now working on a repressive draft NGO law which could worsen an already bad situation for civil society in Egypt.

US Congressman and Chairman of the House Foreign Affairs Committee Ed Royce condemned the ruling. In a statement, he also condemned the NGO law and called on Morsi to “reverse course and allow for Egyptian domestic and international NGOs to work toward a democratic and secure Egypt.” Senator Marco Rubio, a proponent of conditional aid to Egypt, issued an even more scathing statement in which he called on the Obama administration “to make clear to the Morsi government that this action…will negatively impact US-Egyptian relations.” Rubio also revived the issue of US aid to Egypt. Commenting on plans to introduce legislation related to US assistance to Egypt, he said, “We cannot continue to blindly throw US taxpayer dollars at a government that almost every day is taking actions that will only prevent the democratic aspirations of the Egyptian people from being fulfilled and undermine Egypt’s long-term success.”

Representative Ileana Ros-Lehtinen, chair of the House Foreign Affairs Subcommittee on the Middle East and South Asia reiterated Rubio’s sentiment in a statement, "This is yet another in a long line of incidents that should give the United States cause to reevaluate our assistance to Egypt.” She added, “If we continue to send Egypt money from hardworking US taxpayers, even as our own citizens are prosecuted, we send a message to Morsi that we find his regime’s behavior acceptable.”

Secretary of State John Kerry issued a comparatively mild statement, expressing concern over the verdicts. Describing the trial as “politically-motivated”, Kerry said, “I urge the Government of Egypt to work with civic groups as they respond to the Egyptian people’s aspirations for democracy as guaranteed in Egypt’s new constitution.”

The fact that the statement came from Kerry himself is indicative of the gravity of the situation, however the statement was defeatist, and made no reference to the appeals process. With both NDI and Freedom House planning to appeal the court ruling, the US government could have, at the very least, called on the judiciary to ensure a free and fair appeals process.

Worse still, unlike Rubio, Royce and Ros-Lehtinen, Kerry makes no reference whatsoever to the draft NGO law. While the trial was brought to court under the current NGO law, under the proposed and more repressive law, a repeat of this kind of court case is possible. The Egyptian government has repeatedly said that no criminal penalties are included in the draft NGO law. However in Article 70, the list of potential fines for violating the law is prefaced with the qualifying statement that the punishments could be doled out “without prejudice to any harsher penalties stipulated in the penal code or any other law.” In essence, the draft NGO law opens the door to a repeat of the NGO trial if the government or security forces ever so desire.

With more critical statements from the State Department in the past week, this would have been an opportune moment for the US administration to reiterate its stance, in light of exactly how the repressive NGO law could manifest itself, and how it could serve to stifle civil society work in Egypt.