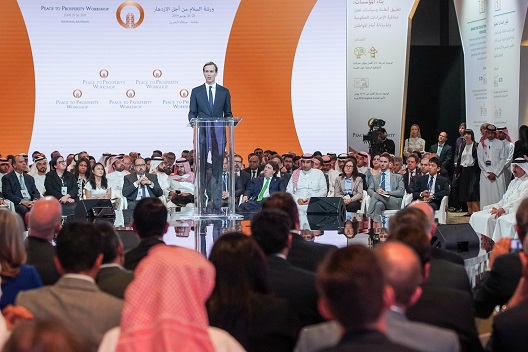 US President Donald Trump’s administration team failed to gather required support from Arab countries during the Bahrain workshop for its economic plan, which would have been the cornerstone for the undisclosed political strategy policy for the Palestinian-Israeli conflict. The economic plan, through its three initiatives, could address paramount determinants of economic prosperity and peace, economic growth, human capital, and governance. White House Senior Advisor Jared Kushner stated during the workshop that the economic plan would be a “necessary precondition to resolving what was previously an unresolvable political situation.”

However, what Trump’s administration—including Kushner—ignored is the central role of justice, especially for Palestinians and Arabs. As the US administration refrained from addressing justice-related issues—the right to return, the end of the occupation of the Palestinian Territories, and the removal of settlements where more than 400,000 Israelis live—resolving the Palestinian-Israeli conflict is unlikely.

Through its confined focus on the economic aspects of the Palestinian-Israeli conflict, the economic plan reduced Palestinians into “homo economicus,” driven by self-interest and influenced by carrots and sticks. The concept of “homo economicus” is derived from “the rational choice theory (RCT),” which leaves no room for justice, and considers any behavior that diverges from that of the economic man as irrational.

On the contrary with the rational choice theory, several psychological experiments such as “trust game and ultimatum game”—which mimics real-life scenarios—demonstrated the crucial role of justice in people’s behavior and decision-making process; regardless of the possibility of incurring some cost. Despite the absence of an enforcement mechanism to prevent cheating, the trust game showed that a group of participants transferred an amount of money to another group benefitting the latter, while incurring some cost to themselves. On the other hand, the ultimatum game also demonstrated that

“many people…are willing to punish other players for behavior they perceive as unfair, and that they do so even at some cost to themselves, and even when the perceived unfair activity was inﬂicted on a third party rather than on the player doing the punishing. These experiments make it clear that people sometimes act in ways that are not intended to promote their interests.”

The senior Palestinian diplomat Saeb Erekat’s latest statement echoed the outcomes of the above experiments stating “full economic potential can only be achieved by ending the Israeli occupation, respecting international law and UN resolutions.” He underscored that economic prosperity goes hand in hand with justice. Erekat said that not only the Palestinian Liberation Organization (PLO) rejected the proposal, Palestinian business people—including some of who were invited to attend the summit in Bahrain—rejected the windfall of the economic plan before it was presented to representatives of participating countries and financial institutions.

The Relevance of Justice

The failure of the economic plan to fulfil the first of the two requirements of retributive justice,—acknowledging and punishing injustice deeds—doomed the entire peace plan to failure. Social-psychological experiments showed that a high level of moral outrage generated from gruesome deliberate acts requires retribution besides financial compensations. Furthermore, vivid and compelling high intensity injustice events elicit justice responses rather than self-interest desires.

Although the economic plan would bring financial and institutional benefits, the plan overlooked injustice committed against Palestinians since 1948. The Israeli newspaper, Haaretz, recently disclosed a secret document describing an injustice  against Palestinians where 52 bound civilians were killed in 1948. Palestinians witnessed similar unjust events, including the  Deir Yassin massacre, where armed Israelis expelled hundreds of thousands of Palestinians from their homes and razed villages to the ground during the Israeli War of Independence. Palestinians have even labelled the event as al-Nabka (the Catastrophe) to commemorate their significant loss, and it has since become intertwined with their identity.

The impartiality of the Trump’s administration and the US President in resolving the Israeli-Palestinian conflict is questionable. The inability of the US to assume the role of the honest broker along with the absence of trust in its fairness, would have driven Palestinians to reject the proposal even if participants in the Bahrain workshop supported it. The neutrality and the trust in a 3rd party mediating and resolving a dispute are essential.

The US ambassador to Israel, David M. Friedman, told the New York Times that “Israel has the right to annex at least some, but unlikely all, of the West Bank.” His statement contradicts claims and intentions by the Trump administration to achieve a long-lasting peace. Furthermore, his statement contradicted the UN’s resolutions, including 446, 452, 465, 471 and 476, which affirm unambiguously that Israel’s occupation is illegal. More specifically, the UN resolution 446 affirmed Israeli settlements in the West Bank “no legal validity and posed a serious obstacle to peace.”

Not only the dismissal of justice rendered the economic plan unattainable, but its timing also contributed to its failure. The Arab World is currently experiencing a second wave of demonstrations. As economic conditions in Arab countries are deteriorating, Egypt and Jordan could have benefited financially by receiving more than $7-9 billion from supporting the proposal. However, accepting the proposal without addressing justice-related issues would have risked stirring up the public against their governments, particularly as Moroccans, Algerians, and Tunisians already marched against the Bahrain workshop, and Iraqis even stormed the Bahraini embassy for hosting the workshop.

According to the Accessible Identity Model, “people will be more likely to think about justice when identity concerns are particularly salient.” The Palestinian cause has been an integral part of the Arab identity. Arabs have joined armies fighting Israel in three wars, and organized demonstrations for decades against Israel and the US for its support to the former, including the one against the Bahrain workshop. Furthermore, Jerusalem has a significant place for Arabs as it hosts one of the three holiest sites, al-Aqsa mosque. Arab leaders would have risked their leadership seat if they would have supported the Bahrain workshop as the public would called for their removal.

As the psychological experiments above indicate, people care about justice. It is clear that Palestinians also strongly demand justice, but not in exchange for economic gains. No matter how the Trump administration tweaks the economic plan, Palestinians and Arab countries will still reject it unless justice-related demands are met. To achieve a long-lasting peace, the US government must ensure the prevalence of justice demands are met, and thereby build a sense of trust, cooperation, and security. The prevalence of cooperation and security are essential for economic prosperity.

Iyad Yousef is a Syrian graduate student from the University of Oxford where he studied for a master’s degree in public policy. He is currently working in London as a senior consultant focusing on macro- and socio-economic, and security issues in the Middle East and North Africa.