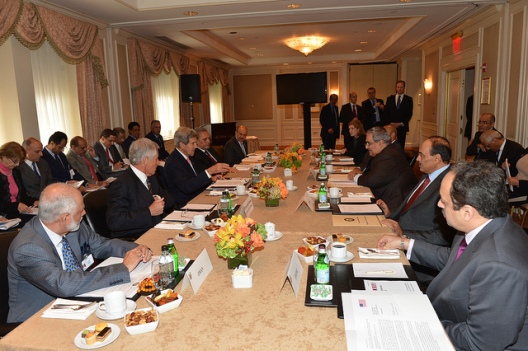 US impotence in the Syria crisis has severely eroded the image of the US as a meaningful super power to Middle East allies. As the United States pursues a diplomatic venture with the Geneva II talks, inaction in wake of daily air and artillery strikes on civilian populations undermine its role as a supporter of democracy. The romanticized notion that Washington would intervene military to stop war crimes and help a people realize their democratic dream gives way to the cynical reality that only short-term strategic interests matter.

More than a year ago, Obama himself set his red line, namely that using chemical weapons or transferring them to parties which may endanger the US national security will automatically trigger a prompt and strong reply. But Assad dared to cross the red line and he suffered no consequences.

Many of those in the region who supported US action against Syria now suffer from a sort of depression as Russia continually takes advantage of diplomatic missteps to enforce a Russian vision in Syria. Vladimir Putin played his hand better they thought possible, paving the way for the realization that the United States does not hold the sway it once did in foreign relations. This realization is keeping US allies in the Middle East awake at night as they nervously consider their options.

At an earlier stage in the Syrian war, regional allies felt that the primary obstacle to action in Syria revolved around the US-Russian clash of leadership, one in which the Russians refused to succumb to the US role as the policeman for the world. It also seems that Moscow has refused to play a passive role, sacrificing potential strategic, diplomatic, and economic gains (such as in the energy markets) as it did in Afghanistan, Iraq, and Libya.

In the context of the Arab Cold War, US allies in the Middle East tend to be weaker on fronts where they face Russian allies (mainly Iran), whether in Bahrain, Yemen, Iraq, or Lebanon. In all of these countries, Iran maintains the ability to impose its regional agenda—primarily by taking advantage of narrow, inconsistent, or reluctant engagement on the part of the United States. In the face of Bashar al-Assad’s most brutal systematic counterrevolutionary military campaign, the United States cannot even defend its own stance regarding action in Syria. If it cannot keep its own house in order, how strongly can it support its own allies in the region?

As diplomatic overtures from Iran’s new president gain traction with the United States, many power centers in the Middle East fear a realignment in the regional relationship, one that implies US willingness to sacrifice the interests of old friends for the promise of a new one. Recently, an Israeli channel reported that Arab Gulf officials visited Tel Aviv to discuss with Israeli leaders means and ways to alter the positive US stance on Iran after the latest developments. If these meetings do not reek of irony, what does? Gulf officials in Israel is only the latest symptom of the panic associated with the clear reassessment of US interests in the region whether in terms of security, oil, or geopolitics.

The Russians have placed President Barack Obama’s Syria policy in “check,” taking control of negotiation efforts to end the conflict. The Iranians have taken similar steps to throw the Obama administration off balance with the Arab Gulf countries. With virtually no consistent Middle East strategy and a lack of control over its own domestic policy, there is little wonder why people of the region believe that Washington could conceivably abandon its allies.

Haytham Tabesh is a journalist and editor based in Beirut.