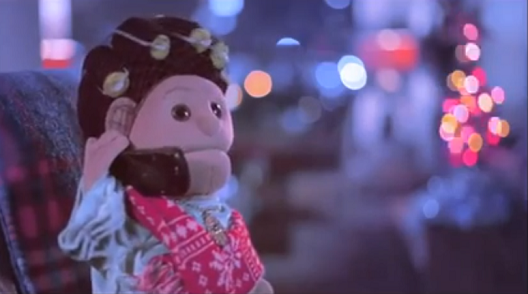 Officials from the mobile phone operator Vodafone were questioned last week by Egypt’s public prosecutor about coded messages allegedly hidden in one of their online ads. The video, said to contain a secret message for terrorists, features internet sensation Abla Fahita, a puppet who rose to fame mocking Egyptian housewives who use the internet as their source of recipes and gossip.

The Prosecutor General saw that the report, filed by a wannabe singer and fame-seeking conspiracy theorist Ahmed “Sbyder,” was worthy of investigation and questioning. The prosecution didn’t ignore it like other complaints, including  an earlier request for an investigation into how a TV anchor acquired and aired recordings of activists’ phone calls..

The issue is not to be taken lightly, as pro-military TV host Ahmed Moussa told a laughing Vodafone executive the night before the questioning. If you were summoned, Moussa said on air, this means that state security has done its investigation and sought the help of coding experts.

On the same show, and on others, Sbyder decoded the satiric character’s attire and her incoherent nitpicking and ramblings. He warned the public about a looming mall bombing and a conspiracy to undermine the army, in addition to a directive for Muslim Brotherhood journalists and TV hosts to keep a low profile. He cited previous tweets by the fictional character as further evidence. Others had previously dissected her older videos and came to similar conclusions, leading to a fight with Sbyder over credit for the exposé.

The story pales in comparison to other jarring incidents. Why should the general public care about this story while Egypt witnesses an ongoing deadly crackdown, widespread arrests, draconian laws, and terrorist attacks? Why would a puppet and mobile company be more important than prominent activists placed behind bars and facing extended jail time for mostly trumped up charges? Why would they be more important than the discussion about Egypt’s draft constitution and upcoming referendum, set to take place in just over a week? What other reason are there to care about a commercial than the hilarity it involves, including no less than a TV news anchor moderating a face-off between the puppet and self-proclaimed theorist, and the array of jokes and cartoons flooding Egypt’s cyber space as a result?

The case could very well be a distraction from all the above, but its audacity shows the lengths to which the government and security services are willing to go for such purposes. Most gravely, it shows how far the government can go, compromising what’s left of the credibility of its investigative and judicial arms, in favor of cementing the conspiracies it consistently claims Egypt is facing.

At the heart of the Abla Fahita decoding claims are American and Zionist conspirators, allegedly moving the Brotherhood or at least working in cahoots with the group. State and private media are littered with accusations levied against activists or any voice of dissent of being foreign agents, Brotherhood allies or both. The roots of this regenerative scheme date back to  Mubarak’s time in power, and gathers unlikely bedfellows in countries like Qatar, Palestine, the United States, Iran, Turkey and Israel. It has been used to silence and vilify dissent, and create a constant state of war that mandates no criticism of the government.

The Abla Fahita case has backfired somewhat; its ridiculousness prompted some supporters of this conspiracy theory to express dismay. Other cases, however, won’t enjoy the same fate despite employing the same tactics, albeit less blatantly. Rather than targeting puppets, these cases target activists, journalists and protesters with charges that are either overblown, or the media simply circulates false information, ensuring that public opinion favors guilty verdicts.

When discussing the sentencing of activists Ahmed Maher, Ahmed Douma and Mohamed Adel to three years in jail, Egyptian media failed to ask whether they actually committed the violence they were found guilty of; They failed to question whether the recent protest law which was used to prosecute them was just, let alone discussing actual details in the case. Instead, TV hosts and writers volunteered “information” implicating these activists, and others, of receiving money from foreign entities in exchange for destabilizing the country.

The same goes for the sentencing of 14 women in Alexandria to 11 years, a verdict which was later reduced to a one year suspended sentence for each of them. Public debates raged about the “terror” these women unleashed on their community, but little was said about whether all of the women in the dock were actually involved in the alleged incident or the evidence listed in official documents: possession of weapons alluded to rocks and the damages incurred were scratches on a door requiring no more than EGP 50 ($7) worth of repairs.

Most recently, State Information Services sent a memo to foreign journalists stressing that the arrest of five members of the Al-Jazeera English crew in Egypt was not due to their association with the Qatari channel. Yet, the Prosecutor General’s statement accuses them of broadcasting “false” information about Egypt. The main accusation is working with the Brotherhood, even though the evidence is limited to meeting members of the group, an ordinary part of any journalist’s work regardless of the recent decision to designate the Brotherhood a terrorist organization. The case itself received a popular label for media consumption, “the Marriott Cell,” further clouding the real evidence and any discussion of it while giving the journalists a devilish tag.

This and other cases show a pattern of cementing the divide on which this and previous regimes have survived. If you are not supporting the current government, then you belong to its sworn enemies. If that’s not logical or threatening enough, then there’s a universal conspiracy against Egypt to bank on. For their part, the judiciary and the prosecution have been solidifying these claims. After acquitting police officials in cases relating to the killing protesters in 2011, lawsuits have now been filed against ousted president Mohamed Morsi, accusing him of colluding with Hamas to kill citizens, instigating violence and breaking open prisons three years ago. The courts could eventually prove that Egypt’s revolution was merely the work of a global conspiracy, exactly as the Mubarak regime claimed. Without a puppet to allude to the idiocy of these claims, the debate will continue to deteriorate with little fanfare.

Sarah el-Sirgany is a Cairo-based independent journalist. She contributes to Al-Akhbar in Lebanon and CNN, among other regional and international publications and networks. She was the deputy editor of the Daily News Egypt and co-authored Diaries of the Revolution.