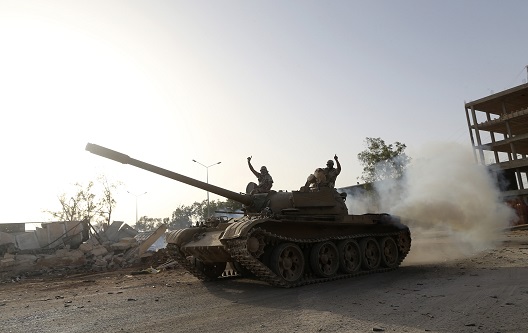 Libyans, who experienced such high hopes after their country’s liberation in 2011, now face escalating violence and a growing humanitarian crisis in Benghazi and Tripoli. Many are fleeing. The implications may be as serious as the conflict in Gaza. Yet there is no concerted effort to mediate a ceasefire.

Fighting between rival militias has engulfed Libya’s capital and set storage tanks containing millions of gallons of gasoline ablaze. Residents face constant power, water, and internet outages on top of the widespread shelling and petty crime. Jihadists in Benghazi continue to assassinate state officials and anyone brave enough to defend human rights and freedoms. They have recently overrun two bases of the Special Forces combatting them and the situation is spiraling out of control. The Libyan government and official army are powerless to respond.

The risks of doing nothing

Most foreign governments have closed their Embassies and evacuated staff and nationals. This signals a disconcerting lack of concern at the prospect of a failed state on Europe’s doorstep. The United Kingdom and Italy at least have kept their ambassadors in place, recognizing that the violence in Libya poses a direct threat to neighboring states and Western interests. The power vacuum in Libya has boosted the smuggling of weapons, drugs, and people across the Sahel region and provided resources, training, and recruitment opportunities for anti-Western jihadists. The number of African migrants who have died trying to cross the Mediterranean from Libya this year is just one tragic example of the consequences. Our leverage to tackle these threats may be limited, but we cannot afford simply to disengage.

Military intervention will not work either

Some, including Libyan Prime Minister Abdullah al-Thinni, have called for international intervention to stop the fighting or at least to protect key installations and civilian populations. But military intervention is unlikely to work in practice. Military intervention did prevent Qaddafi’s forces launching a brutal assault on Benghazi in 2011, but UN authorization and the request for assistance from both the Arab League and Libya’s National Transitional Council provided much needed legitimacy to the operation. Once it had fully achieved its objective, the international coalition withdrew, as the new Libyan government requested, to allow the Libyan people to take control of their own future.

The choices in 2014 are not so clear-cut. Disconnected from the population as a whole, none of those involved in the fighting are innocent victims. When Libyan civilians have taken to the street, or the ballot box, they have rejected militias altogether. This week, protesters demonstrating against jihadist attacks on public institutions temporarily drove Ansar al-Sharia, an extremist Islamist group, out of a prominent hospital it occupied in Benghazi. The warring groups, while broadly labelled as Islamist or anti-Islamist, each represent a range of views and interests, driven less by ideology than by the desire for control of territory, strategic institutions, and national resources.

Neither the Islamist nor the anti-Islamist forces seem capable of winning a quick or conclusive victory over the other. There is, therefore, no end in sight to the current violence. The key to solving the current political crisis and ending the conflict lies in negotiating an agreement among the leaders of the militias and the cities they represent on an inclusive political process. Once there is a measure of agreement, there may be scope for sending a neutral international force to guarantee security for key installations in Tripoli and Benghazi. But the first step must be to secure a ceasefire and an end to inter-militia violence. Several countries and organizations have appointed envoys with experience in international mediation to help. Their separate efforts now need to be properly coordinated and given greater impetus and backing under a UN umbrella.

A mediation process will not provide an instant solution. It may take time for the militias, who are wary of being sidelined, to accept that there can be no military victory and that they have more to gain through the political process. But the pressures of public opinion, exhaustion, and stalemate will tell eventually. By then, a concerted international mediation effort should stand ready to take advantage of the opening and facilitate a way forward.

Fortunately, there are grounds for hope. The newly elected House of Representatives and the constitutional committee are both legitimate institutions elected to serve the Libyan people rather than parties or local interests. They could provide a focus for a new national political settlement. They can occupy the political space, which has recently been abandoned to the militias.

Only a mediation process aligned with the new parliament and a new constitutional settlement, backed by the international community, offers any prospect of breaking the cycle of fear and violence in Libya. Libyans do not hate each other or seek to cleanse society of their opponents. They simply suffer from a deep lack of trust and fear of exclusion and exploitation bred from years of dictatorship. These concerns can be solved around the negotiating table with the right international encouragement and support. Even the most intransigent of militia leaders will come to see that there is no viable alternative to compromise.

Richard Northern was British Ambassador to Libya in 2010-2011, and is now Director of RN4 Consultancy.

Jason Pack is President of Libya-Analysis.com and co-author of “Libya’s Faustian Bargains: Breaking the Appeasement Cycle”.

Image: Fighters from the Benghazi Shura Council, which includes former rebels and militants from al Qaeda-linked Ansar al-Sharia, gesture on top of a tank next to the camp of the special forces in Benghazi July 30, 2014. On Wednesday, the eastern city of Benghazi was quieter after Islamist fighters and allied militia forces overran a special forces army base in the city in a major blow to a military campaign against Islamist militants there. The self-declared Benghazi Shura Council forces took over the base on Tuesday after fighting involving rockets and warplanes that killed at least 30 people. (Photo: REUTERS)