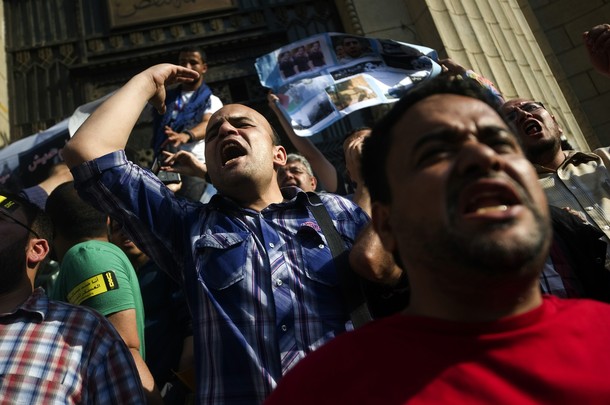 Last week, Cairo witnessed a blood bath in Abbassiya next to the headquarters of the Defense Ministry, which ended on Friday afternoon with another show of force, in which the armed forces dispersed a sit-in of supporters of disqualified presidential candidate Hazem Saleh Abu Ismail and other protesters who had been demonstrating in solidarity with them. The confrontation resulted hundreds of arrests and injuries after the army used excessive force to break up the protesters and chase them out of Abbassiya Square – a place that until now has never been stained by the abundant bloodshed of young Egyptians, such as that which has been witnessed in squares and streets across the country over the past year.

Despite the suspicious media silence and limited coverage of the clashes between unarmed protesters and  thugs backed by unknown parties leading up to the military’s crackdown on Friday, May 4, it is clear that the pattern of events mirrors previous violent scenarios – with the only differences being the number of dead and injured.

What is clear in light of the series of blood events that have taken place in Egypt since the fall of Mubarak’s regime in February 2011 is that none of the parties involved have learned from their mistakes. This failure to adapt rhetoric and behavior to the situation at hand appears to be more naïve than malicious, not change from the rhetoric is now more accurately described the behavior is naive not wrong, and some of the errors committed may even have been intended to serve the public’s interests.

After observing the events on the ground in Abbassiya, I have reached the following conclusions:

1) The SCAF’s image has been irreparably tarnished. The Egyptian military’s excessive force to disperse a limited sit-in by political forces has put at stake the honor of soldiers and undermined the credibility of the SCAF’s slogans pledging to refrain from violence against civilians. The integrity of the SCAF’s words has been called into question by the storming of mosques, the arrest of girls and chasing of protesters in areas far away from the Defense Ministry building. The clear purpose of these actions was to torture, humiliate, and even kill the targets in many cases. It has become clear that the SCAF’s promises to refrain from using force and contaminating their hands with the blood of Egyptians is not consistent with realities on the ground. The SCAF is becoming painfully aware of its eroding popularity, and its decision to hold a public funeral for the martyrs of the violence is clearly an attempt to improve the military’s image.

2) Salafi clerics bear partial responsibility for recent violence. The former Salafi presidential candidate Hazem Saleh Abu Ismail bears some of the responsibility for  the violence in Abbassiya, , just as he played a role in instigating the clashes in Mohammed Mahmoud Street last November when he summoned  his supporters to Tahrir Square for a “last chance” demonstration on November 18 on Friday "last chance" on November 18. Although Ismail later decided not to participate in the November 18 sit-in, his previous calls still resonated with the crowds, which were drawn into bloody clashes in Mohammed Mahmoud Street two days later. The violence left 42 killed and 3000 injured.  Last week, Ismail repeated this deadly mistake by failing to call on his supporters to end their sit-in outside of the Defense Ministry over their objection to Article 28 of the interim constitution, which bars appeals to decisions made by the Supreme Presidential Election Commission (SPEC), and which resulted in Ismail’s disqualification from the race due to his mother’s American citizenship. In both cases, Ismail could have intervened to prevent bloodshed, but he chose not to. Ismail has influenced the outbreak of violence of more than one violent confrontation, which cannot be blamed on the victims – who were only following the guidance of clerics with no experience in politics. It is striking that Ismail has not visited his supporters once in Abbassiya since the outbreak of violence, before proclaiming them innocent of any wrongdoing.

3) Revolutionary forces are still capable of unity.  Despite the animosity and tensions between Islamic political forces and their civil counterparts during and after the parliamentary elections, the events at Abbassiya have proved that revolutionary forces are still very capable of unity. These revolutionary groups are still outside of the formal political arena and lack partisan affiliations, but they still share common objectives – just as they did during the 18 days of the revolution in Tahrir Square. Although the sit-in began with Salafi supporters of Ismail, revolutionary groups quickly joined the demonstration in a rare show of solidarity between the conservative Islamist movement and activists groups such as the April 6 Youth Movement, which the former has long accused of being a secular organization.

4) Protesters were asking for trouble by gathering at government buildings. Revolutionary forces clearly made a mistake in organizing sit-ins in the vicinity of ministerial buildings and security headquarters – as they did previously with the Cabinet building and Interior Ministry – and this mistake resulted in dozens of casualties and injuries without any achievement or progress toward the protesters’ objectives.
5) The use of thugs to break of protests has been one of the shadiest and most scandalous games played in recent demonstrations, after it became apparent that the army and police could not be openly deployed to break up demonstrations without inflaming anger against the SCAF. The SCAF’s reluctance to use direct and blatant force led to the phenomenon of proxy crackdowns by third-party thugs.
6) SCAF complicity in Abbassiya? Although the armed forces have proven themselves to be very effective in chasing down and detaining protesters, they made little effort to pursue the armed thugs attacking the crowd in Abbassiya, suggesting  that the SCAF did not want to see the thugs arrested and was perhaps even conspiring directly with them against protesters.
7) Violent clashes have preceded every major electoral process since the revolution.  The confrontation in Abbassiya took place three weeks before the most important presidential election in Egypt’s history. The timing of the incident has led some commentators to speculate that the SCAF would like to see elections postponed, although a delay is highly unlikely. These rumors are understandable in the context of rising insecurity, which will likely motivate voters to choose candidates based on their ability to restore security in the streets.
8) The Egyptian media seemed to be providing distorted coverage of the violence outside of the Defense Ministry by focusing heavily on the Salafi supporters of Hazem Saleh Abu Ismail, rather than the broader range of political forces represented in the crowd. Focusing on the Islamist element sent a clear message to the public that violence and political Islam are still inextricably linked, a signal that was reinforced by the presence of al-Qaeda leader Ayman al-Zawahiri’s brother, Mohamed al-Zaswahire, who had joined the sit-in to call for jihad against injustice.
Haitham Tabei is a journalist at Asharq Al-Awsat.  He has previously worked as a special correspondent for the Washington Post in Cairo and as political researcher with the Egyptian Council for Foreign Affairs.