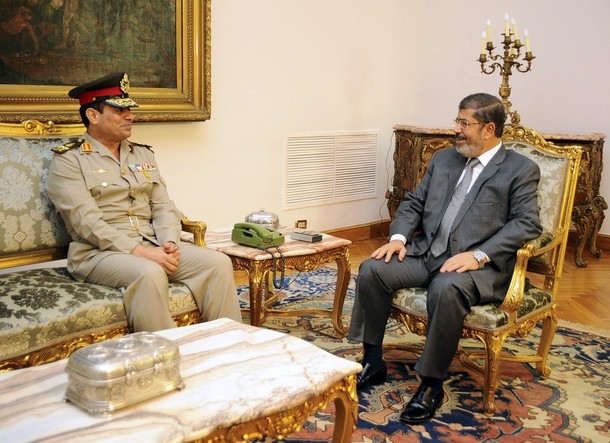 The Supreme Council of the Armed Forces’ (SCAF) official Facebook page featured one new post on Monday: a CV of sorts detailing the 35 year military career of the new SCAF leader and Minister of Defense, Abdel Fattah al-Sisi. The post signals that President Mohamed Morsi’s  move on August 12, forcing SCAF heavyweights, Field Marshal Hussein Tantawi and Chief of Staff Sami Anan into retirement, will not be contested.  A Facebook page allegedly associated with SCAF was more forthright with a post referring to the shuffle as a “natural change”. Reclaiming legislative and presidential power, Egypt’s first civilian president now appears to be more powerful than his predecessors, as Morsi, and the Freedom and Justice Party (FJP), continue to inherit Mubarak and SCAF’s autocratic powers, many of which are the underlying cause for repeated protests, and continue to pocket them for themselves.

With his decree, Morsi has inherited the very same constitutional declaration the country’s political forces decried, among them members of the Muslim Brotherhood. He has all but replaced any mentions of SCAF in the pre-existing clauses with references to the presidency. The clauses are almost identical, with slight changes only to the time periods within which the draft constitution will be put to a national referendum, and a new parliament will be elected. Most significantly, Morsi now has the power, if need be, to form a new assembly, albeit with the added detail of it being a committee “representing the full spectrum of Egyptian society.”

It is worth noting that Morsi’s far-reaching powers are a direct result of the absence of an elected parliamentary body, a decision that was made by Egypt’s Supreme Constitutional Court, and enforced by SCAF itself. Had the Parliament still been in existence, even if dominated by the FJP, it would have provided a modicum of balance in the new power landscape.

Whether or not Tantawi and Anan were aware of the changes continues to be a topic of discussion. General Mohamed al-Assar, one of the SCAF generals who benefited from the shuffle, told Reuters, "The decision was based on consultation with the field marshal, and the rest of the military council." Al-Assar’s comments, however, came extremely early, and may have simply been an attempt to preempt talk of an internal military coup. This is reinforced by statements made by presidential adviser Mohamed Fouad Gadallah who said that the forced retirements came as a surprise to both Tantawi and Anan. Rumors that the pair is under house arrest have been denied by the presidency.

Mohamed El Baradei commended Morsi’s latest move which he feels put an end to military control over the country’s governance, saying that it placed Egypt’s transition on the right path. He did add, however, that the extent of the president’s powers was cause for concern: “With military stripped of legislative authority; in absence of parliament, president holds imperial powers. Transitional mess continues.”

Others have characterized it as a takeover rather than an end to military rule, as it is worth bearing in mind that SCAF itself is still very much in existence, but now with leaders who owe their jump in rank to collusion with Morsi. Robert Springborg, professor at the Department of National Security Affairs at the Naval Postgraduate School told Egypt Independent, “The military is now serving as an instrument for the Muslim Brotherhood. Morsi’s move institutionalizes normal civilian control over the military.” He added that the Sinai attack helped cement the Muslim Brotherhood’s already in-motion plan.

With SCAF’s acceptance of the changes, the retired army leaders were possibly placated with their appointment as advisors, and more importantly, the assurance that they will not face the same fate as their former president, Hosni Mubarak. Mamdouh Hamza, a longtime critic of the Mubarak regime and supporter of the January uprising told Time, “I think the deal is [Tantawi and Anan] get a safe exit, and they hand the country to the Muslim Brotherhood, because quite honestly, if we apply the same law [to the generals] that we applied to Mubarak’s family, Tantawi would be behind bars.”

Morsi’s decision has earned itself comparisons to former Egyptian president Anwar Sadat’s 1971 ‘Corrective Revolution’, in which he ordered the arrest of Nasser remnants in the nation’s security forces, accusing them of plotting a coup. He also took control of the leadership of the Journalists’ Syndicate. It is hoped that the similarities end there, as the period following Sadat’s Corrective Revolution was replete with censorship and sweeping arrests.

However, last week the FJP dominated Shura Council’s appointment of new state newspaper editors was met with criticism, as journalists fear the same Mubarak-era oppressive tactics will be used against them under Morsi’s rule. The Shura Council’s control over state media is a holdover from Mubarak’s regime, and many feel it was used as a means of placing Muslim Brotherhood supporters in positions of power to ensure a media more sympathetic to their cause.

More recently, two privately owned media outlets have been targeted in the courts for their openly critical coverage of the Muslim Brotherhood. Faraeen, a TV station notorious for its pro-SCAF stance, and highly critical of the January 25 uprising and the Muslim Brotherhood has been suspended for one month, while Al Dostour, a private newspaper, saw one of its editions pulled from the stands. A travel ban has been slapped on both Al Dostour’s Editor in Chief, Islam Afifi and head of Faraeen, Tawfik Okasha.

While Morsi and the brotherhood seem to be battling to take control of the country’s media, security and legislation, the Freedom and Justice Party’s reassurances that they do not seek to become the new National Democratic Party are feeling more distant than ever. At the same time, many questions remain unanswered, including the fate of the dissolved parliament, as it is unclear whether or not Morsi will revisit his attempt to reinstate it. After convening once, parliament referred its own fate back to the courts, which have remained quiet on the issue until now. It is also unclear if Morsi will use this power grab to the advantage of many of the pressing revolutionary demands, among them the release of thousands of detainees tried in Egypt’s military courts.

Nancy Messieh is associate director at the Atlantic Council’s Rafik Hariri Center for the Middle East and editor of EgyptSource.