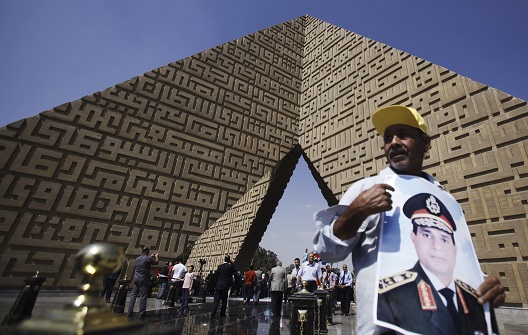 Tutelage refers to how parties in power that claim to hold a monopoly on the absolute truth aspire to set the standards of good and evil, right and wrong, principles and values that should be adhered to, the concepts to be held true, what knowledge should be acquired and the hopes and dreams that should be the object of everyone’s aspiration. These powerful parties can include a totalitarian-authoritarian ruling elite, religious institutions, institutions that possess compelling force, or political or social elites. In other words, the idea of tutelage prescribes for the citizen how he should organize his public and private life, and deprives him of his right to choose. It deprives the citizen of his freedom to reflect, think, speak and act, and effectively transforms him from a citizen with an individual existence to a member, element, or party to be crushed within the bounds of a larger whole, be that an organization, a society, or the people.

The January 2011 Revolution was characterized by a democratic agenda and a clear popular demand to seize the right to choose, enjoy liberty and escape from the tutelage that had been exercised by Egypt’s rulers in different forms from 1952 to 2011. Despite this, attempts to re-impose this tutelage on the Egyptian people have not ceased and have come from increasingly diverse sources.

The Supreme Council of the Armed Forces (SCAF) – sometimes on its own and sometimes in cooperation with the Muslim Brotherhood and other forces of the religious right – wanted to shape the people’s priorities and place bread, security and stability ahead of freedom and democracy. They wanted to tilt the state, society and the political arena in favor of those at the top, operating on the assumption that people would support this in advance. Or if not, they would push the people to support it by casting spurious allegations that the alternatives were treasonous or unpatriotic, or by propagating fears about the advocates behind such alternatives, unjustly accusing them of being opposed to the national interest and the public good.

Between 2011 and 2013, the religious right – both in its Muslim Brotherhood and Salafist incarnations – obtained a majority in the legislative branch (the People’s Assembly and the Shura Council) and in the Constituent Assembly to draft the constitution, and the Muslim Brotherhood candidate Mohamed Morsi won the presidency. In step with these developments, the concept of tutelage began to be promoted more intensively and a mixing of politics and religion was employed to justify it.

By this logic, voting for the religious right in parliamentary and presidential elections became – spuriously – a necessity made incumbent by the demands of “religious correctness” on the Egyptian people, who are “by their nature religious,” and an imperative to the goals of bread, security, and stability. By this logic, the majority’s approval of the 2012 Constitution (whose drafting was dominated by the Muslim Brotherhood) was taken to mean – spuriously – that people accepted the religious right’s tutelage over the state and society and recognized that it held the absolute truth.

The text of the 2012 Constitution contained numerous provisos that seemed to promote this tutelage. It enshrined the state’s role in upholding morals, traditions, customs and the authentic character of the Egyptian family. It placed the official religious body Al-Azhar in the role of determining for the legislature what are the limits of good and evil, right and wrong, accepted and rejected. And finally, it subjected personal and civil rights and freedoms to restrictions that originate in a narrow understanding of religion and a failure to distinguish between what is mutable and what is constant in religious value systems. The approval of this text in the referendum was spuriously taken as confirmation that the popular will was demanding tutelage and continuously rejected freedom and the right to choose.

Opposition, however, emerged to the religious right’s majority in the legislature and the constituent assembly and attempts were made to resist their authoritarian policies and practices. (It should be remembered that from the despotic November 2012 decree granting himself sweeping powers to various human rights violations, former President Mohamed Morsi was himself implicated in many of these abuses.) But by the logic of tutelage, any such resistance was deemed an “abhorrent departure” from the popular will that had accepted and submitted to the religious right’s tutelage. Such a departure could only be the work of corrupt groups, groups that should be condemned as infidels, excluded and deprived of their right to exist.

Nonetheless, starting with protests against Morsi’s November 2012 Constitutional Declaration and the constitution that was rushed through in December of that same year, the religious right’s tutelage was rejected time and again. This broad popular movement would ultimately culminate in the events of June 30, whose aftermath we are still living through. And while this movement’s main demand was for an end to the religious right’s tutelage through democratic mechanisms – i.e., early presidential elections – it also sought freedom and the citizen’s right to choose. However, since July 2013, the ruling circle (consisting of the military-security apparatus and the allied economic, financial and media elite) started to promote the idea of tutelage in a different form and impose it on the Egyptian people through various means.

Since July 2013, those in power have held a monopoly on the right to speak in the name of patriotism and national interest. They have used it to compel people to accept the bargain of giving up freedom in exchange for bread and security, and to coax them into not resisting the widespread human rights violations, or ignoring them and even justifying them, because “Egypt is in danger” and “the war on terror” requires it.

Since July 2013, the ruling circles have reduced the nation, state, and society to the person of defense minister and presidential candidate Abdel Fattah al-Sisi, and presented him to people as the heroic savior required by the current “stage,” as one who is capable of “saving Egypt” from “domestic and foreign conspiracies.” Once again, they are herding the people into the boxes of the “sole solution,” the “sole alternative,” coaxing them to accept the savior’s hand reaching into the state and society, and to submit to the abolition of their freedom and right to choose now that they have lost their right to be in public spaces and peacefully express their ideas and opinions, through the Protest Law and other repressive laws.

Since July 2013, those in power have been betraying and distorting the groups and voices that have risen in defense of democracy, freedom and human rights and painted them in various negative ways. They are portrayed as the source of chaos and destruction and accused of trying to overthrow the state and destroy society. The aim here has been to deprive people of the ability to think freely and consider the goals of such groups and voices, and really listen to their logic – a logic that says that oppression, tyranny and authoritarianism are the true destroyers of society and the state. Rather than uphold the coherence of society and the state through right, justice, freedom and civil peace, the reigning circles are striving to achieve this through a servility that eliminates freedom and the right to seek out the optimal policies and decisions to confront the crisis of terrorism, violence and a democratic transition that is going off the rails.

Since July 2013, those in power have been trying to impose their tutelage on people’s thoughts, words and deeds in both public and private life, both through use of the media’s mechanisms for creating false cognizance and by propagating Sisi’s paternal authority. They are manufacturing a stereotype of him that compels people to accept it when he prescribes how we should lead our private lives, whether it is a question of correcting morals and recovering praiseworthy customs and traditions or even regulating household consumption patterns. This is, of course, not to forget all the prescriptions laid down for our public lives as well. We are called upon to work hard, stop protesting and prioritize bread, security and stability over freedom and human rights. And last but not least, we are told to place absolute faith in the heroic savior’s leadership. In this way, we are to all be fused in one opinion and one voice and not flock around those “tweeters” outside of the flock – those voices that want to overthrow the state and society. This is complete tutelage and a total abolition of freedom, the right to choose and the existence of the individual citizen. It does not differ at all from the religious right’s conception of tutelage. Rather, the threat both of them pose to Egypt is increasing, due to the popular support they enjoy and their exploitation of the state apparatus and private economic and media interests to shore up their bases.