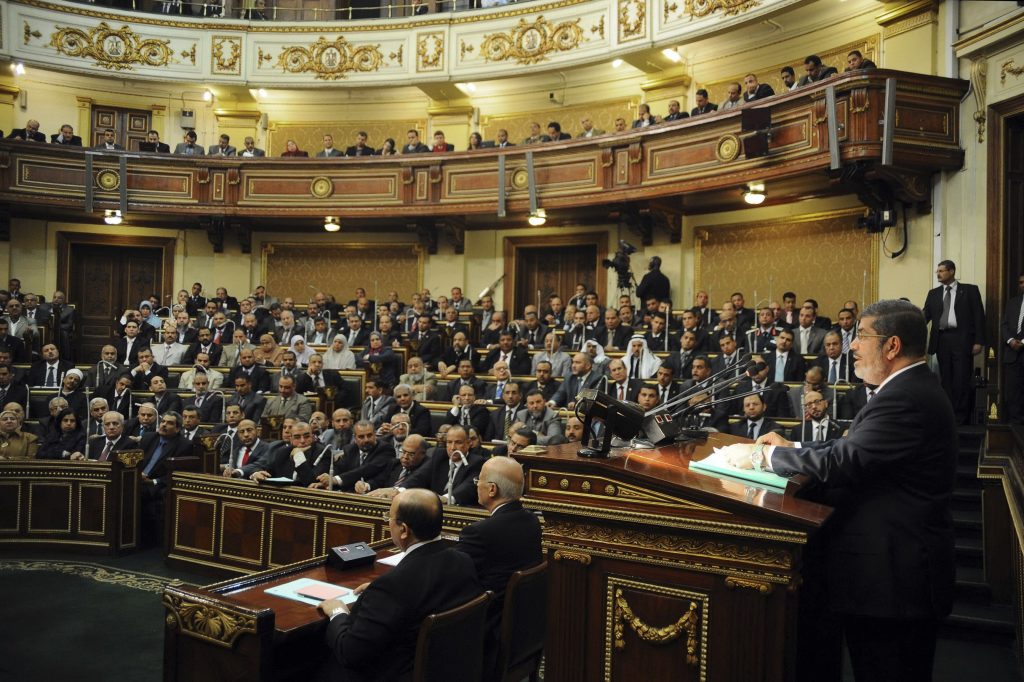 As was expected, Egypt’s Supreme Constitutional Court (SCC) ruled many provisions of the proposed Elections Law and Exercise of Political Rights Law, as unconstitutional. This decision reflects the continuing state of disarray that colors the legislative process in Egypt, both in the constitutional drafting process and the passage of laws. The SCC found that amendments to these two laws drafted by the Shura Council (the temporary parliament) were in violation of the constitution in nine points. While the Shura Council continues to move forward with the electoral law, the law is still not in line with the SCC’s rulings.

An official statement from the SCC on Thursday indicated that the changes adopted by the Shura Council do not meet the court’s complete requirements. The legal provisions declared by the SCC to be unconstitutional must still be amended.

According to Article 177 of the new constitution, the SCC’s decisions are enforceable, which means that the unconstitutional provisions must be changed. To assess the importance of the SCC decision, it is necessary to discuss some provisions that were ruled unconstitutional due to their direct impact on the electoral process.

One key SCC ruling is that the distribution of seats in the House of Representatives violates the principle of fair representation according to population. Article 113 of the new constitution calls for the division of electoral districts in an equitable manner based on population. The draft law on the People’s Assembly (now known as the House of Representatives) allocated 498 total seats in the body. Two examples show what a mockery the draft law makes of the principle of equal representation based on population: The draft law allocated 30 seats to the Giza governorate, which has 4.3 million voters and has the second highest number of voters than any governorate. Meanwhile the Dakahlia governorate with just 3.7 million voters received 36 seats. Likewise, the law allocated just 24 seats to Alexandria, the fourth largest governorate with 3.3 million voters, while at the same time giving 30 seats each to Gharbia, Beheira, and Sohag – all governorates with far fewer voters than Alexandria.

In another important move, the SCC also declared Article 7 of the Political Rights Law draft unconstitutional. This provision tasked Egyptian diplomatic missions and embassy staffs with supervising elections and public referendums held abroad. By way of background, it was agreed upon that public  elections would be carried out under direct judicial supervision during all stages of the electoral process, and this principle was enshrined in Article 210 of the new constitution. For this reason the SCC ruled the text of the Exercise of Political Rights law unconstitutional, as it provides for the supervision by diplomatic delegations of elections and public referendums for Egyptians living abroad. This means that the Shura Council must find a way to solve the dilemma of how elections are to be held outside Egypt.

This crisis has two theoretical solutions, but both are impossible. The first is that the judiciary could supervise elections outside of Egypt, which would require judges to travel to over 160 countries in which Egyptians reside, with 585,000 eligible registered voters; it’s clear that this “solution” would be impossible to apply. The second solution, however, is even more impossible, which is to amend the new constitution itself to permit non-judicial supervision over elections outside of Egypt. Once again, this is theoretically impossible because amending the constitution requires the House of Representatives and Shura Council to be seated concurrently. Thus the new constitution cannot be amended, according to its own provisions, without the presence of both houses of parliament. Of course, the House of Representatives is not seated so the constitution cannot be amended. Given all this, there is no solution on the horizon to this great dilemma that has resulted from the legislative muddle Egypt has been living through for the past two years.