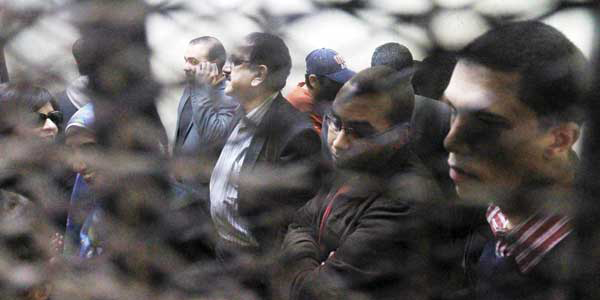 With the political pageantry of the upcoming presidential election dominating the headlines this week, a legal campaign targeting Egyptian civil society groups is doing further damage under the radar. A criminal case against 43 employees of democracy-promoting NGOs accused of using foreign funding to foment unrest in Egypt resumed for a second session on April 10, only to have the judge adjourn the proceedings until April 16. Not surprisingly, the hearing was dominated by the same virulently xenophobic rhetoric that has been spewing from public officials since July 2011, when the Cabinet instructed the Ministry of Justice to establish a fact-finding commission to investigate all civil society groups receiving foreign funding.  Arguments broke out in the courtroom after the prosecutors requested that the charges and penalty be modified to include “death by hanging for threatening the stability of the nation and damaging its interests."

While the politically motivated case is going nowhere fast, Egypt has taken the troubling step of asking Interpol to issue “red notices” for the arrest of as many as ten Americans implicated in the case. The State Department paid as much as $5 million in bail for the defendants, who were quickly branded as “fugitives” when they failed to return to Cairo for court proceedings.

While the accused Americans could face penalties of up to five years in prison if convicted, the stakes for Egyptian civil society are much more serious than jail time. With parliament currently debating a new NGO law that has already been slammed for its imposition of “new arbitrary restrictions aimed at terrorizing civil society activists,” Egyptian civil society could soon find itself in an even tighter stranglehold than Mubarak’s iron grip. In addition to preserving the existing legislation’s ban on foreign funding with government approval, introduces even more restrictions aimed at subordinating NGOs to invasive regulation by the government, essentially “integrat[ing] civil society organizations into the state apparatus,” warned a joint statement by 25 leading NGOs. Under the revised law, NGOs would be banned from joining international NGO networks without government consent, prohibited from conducting field research, and barred from participating in the vaguely defined category of "any other political activity, whether positive or negative, considered to be the exclusive practice of political parties.”

The NGO probe is just one hazard within the increasingly hostile legal and political environment – or rather, mine field – in which Egyptian NGOs operate.

Meanwhile, the repeated postponement of a case that is already expected to drag on for months is perhaps just as damaging to the defendants as a conviction would be. Forced to expend their energy defending their activities, NGOs have been paralyzed by the probe at a time when their watchdog role is urgently needed: With presidential elections fast approaching on May 23-24, liberal and revolutionary groups are already anxious about the possibility of electoral violations that would facilitate victory by an Islamist or Mubarak-affiliated candidate who enjoys the tacit support of the ruling military council. After rejecting calls by the Muslim Brotherhood for a million-man demonstration on April 13 to “protect the revolution” from the resurrection of former regime elements, the leftist Tagammu’ Party and other non-Islamist groups are organizing a separate rally on April 20 to protest Islamists’ domination of the constitution-writing process and to demand the repeal of April 28 of the constitutional declaration, which bars challenges to election results.

Without a strong civil society to exercise scrutiny over the electoral process, the results of what is expected to be a fiercely competitive and ideologically charged presidential race could easily be called into question – leaving Egypt without the legitimately elected leadership it so desperately needs.

Mara Revkin is the assistant director of the Atlantic Council’s Rafik Hariri Center for the Middle East and editor of EgyptSource.