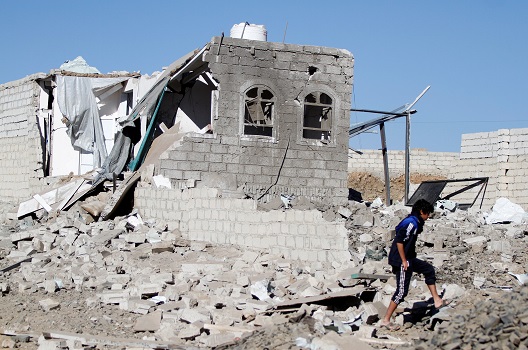 The passage of Senate Joint Resolution 7 is a fresh rebuke for the Trump administration, that its support for the Saudi-led war on Yemen is unauthorized, illegal, and an immoral assault on the Yemeni people. To boot, the war, already in its fifth year, does nothing to enhance US national security interests according to Vermont Senator Bernie Sanders and other sponsors of the bill.

On the positive side, the passage reaffirms the strong interest among Democrats in Congress to end the war in Yemen and reclaim the war powers authority of the legislative branch of government. The 54-46 majority indicates some Republican agreement and willingness to defy the president on a subject clearly dear to his heart; his alliance with the Saudi royal family.

The flip side of this is that a 54 majority is still six votes short of what’s needed to overcome a probable presidential veto to prevent the bill from becoming law. That all 2020 Democratic presidential candidates lined up behind the resolution is an indication that the tide in Congress is turning against the president on this and that a change in policy will be all but guaranteed should a Democrat win the presidency in 2020. The sad fact, however, is that war-torn and famine-stricken Yemen cannot wait till 2020 to end what the UN has described as the worst humanitarian disaster in the world. A strong US diplomatic initiative is sorely needed.

The resolution to stop the war in Yemen made it through the Senate yesterday, but not unscathed. Of two attempts to water down the resolution, one amendment introduced by Oklahoma Senator Jim Inhofe—which would have exempted US assistance to defense against ballistic missiles and UAV threats—did not pass. Another, introduced by Florida Senator Marco Rubio, passed by voice vote and exempted intelligence sharing from any cut-off of US assistance to Saudi Arabia.

GOP attempts to introduce further amendments in the House are expected and the willingness of Nancy Pelosi’s Democrats to compromise cannot be discounted. The components of US assistance to the Saudi war effort, at once defined and vague, could be stripped on the grounds of being unrelated to the Yemen war.

US assistance in enforcing a naval blockade around Yemen, for example, is crucial if Saudis and Emiratis are to be safe from Iranian naval harassment—a defense need not necessarily related to the war in Yemen. Similarly, intelligence sharing, critical for the Arab coalition’s jets finding and targeting opponents in Yemen is also used to find and target al-Qaeda operatives in the country. Once again, it may be hard to define what passes for legitimate counter terrorism intel exchanges and what actually is being used by the coalition to help defeat the Houthis. The training of Saudi and Emirati pilots, command and control center operatives, and foot soldiers is also part of a general military cooperation between the US and its allies and in principle not directly related to the war in Yemen.

Between watering-down amendments and the threat of a presidential veto, the measure passed by the Senate is still a long way from guaranteeing an end to the war in Yemen. For that matter, the Stockholm agreement between the Houthis and the Hadi government last December, touted at the time as a very promising first step towards peace may in fact be on the verge of collapsing. Through no fault of UN envoy Martin Griffiths, his mediating efforts have been limited to a ceasefire in one city—critical though it may be for safeguarding the entry of humanitarian assistance to Yemen.

The three elements of the agreement, a prisoner exchange, a redeployment of forces from the city of Hodeidah and the reduction of tensions around the important city of Taiz, could proceed in their very slow and deliberate matter, allowing Griffiths to report some measure of success to the United Nations Security Council while the war is going hot and heavy in the rest of the country. In particular, battles in northern Yemen, along the Saudi border between the Ali Mohsen forces and the Houthis, and further south-east in the province of Hajjah are indications of a continued full-throttle attempt by the Saudi backed forces to completely encircle the Houthis in the Saada-Sana’a corridor, perhaps even splitting the two Houthi-controlled centers from one another

The Houthis, battling the Hajour and other tribes in northern Yemen are fighting desperately, if sometimes brutally, to keep from losing strategic areas from which the Saudi-led forces could penetrate into their so far safe zones. With such battles going on, it is hard to see the Hodeidah talks and potentially successful arrangements for Hodeidah as anything but a distraction. The question, to both the Arab coalition and to the Houthis should be, “Do you guys really want peace or not?”

Martin Griffiths does not have the leverage over regional and international powers to meaningfully ask this challenging question. This is where the US should come in, and quite frankly this is where the congressional attempts to challenge the Trump administration fall short. Six weeks before the Stockholm peace table was convened, former defense secretary, Jim Mattis, made a rather strongly worded appeal to the warring parties in Yemen, saying “we expect to see peace talks convene within the month.” Reportedly, Mattis spoke directly with crown prince Mohammed Bin Salman (MbS) asking him to lean on Yemeni president Hadi to make sure he attends the talks. It was the first such direct intervention by the US government and led to the meeting in Stockholm—a meeting which had failed to convene in Geneva in September of that year. In fact, peace talks had not been held for two years prior to that.

All participants in the Yemen war are currently benefiting from its continuation. The Hadi government is getting rich on the largesse of Saudi Arabia. Its members are notoriously corrupt and not providing basic goods and services to their countrymen; and lack any incentive in trying to find peace for their country. The various militias and mercenary groups working ostensibly on their side and also funded by Saudi Arabia and the United Arab Emirates (UAE) are also making too much money. They are seemingly unaccountable to anyone for their actions in Yemen and lack the motivation to stop.

The Houthis have until recently been the paramount tribal group in northern Yemen, power seemingly unchecked and benefiting from dominance over parts of the country they never previously controlled before 2014. Their control over Hodeidah in particular has guaranteed them an income from taxation over ships that dock in the only open port in the country and over humanitarian food trucks. This in addition to taxes they levy on populations under their control. Unless they are put on the defensive or made to lose the income they currently derive they may not have an incentive to end the war.

Regionally and internationally, there also seems to be no rush for Saudi Arabia to end the conflict. They have handled international opprobrium by fighting back with bought media and think tank outlets literally staving off many journalists and scholars from criticizing them. It is unlikely the UAE will seek to end the conflict anytime soon either. They are spending too much money to be sure, but they are not losing enough casualties to move their populations against them anytime soon. Further, with all the equipment and training pouring through, MbS for one is achieving a stated goal of becoming supreme in the region. The fighting skills they are learning are unmatched in their history—virtually using Yemen for target practice and for how to manage modern warfare.

The Trump administration has made it clear that Saudi Arabia is a cash-cow they are not interested in abandoning, hence the defiance of the will of Congress on the subject of pressuring the Saudis to end the war—unless pressured by Congress to do so.

For the US, the long term national interest is not being served. The longer this war continues, the stronger the connection gets between the Houthis on the one hand and Iran and Hezbollah on the other. More ominously, al-Qaeda in the Arabian Peninsula (AQAP) is getting stronger and more firmly rooted in the chaos that is Yemen. It is only a matter of time before they start seeking to target Americans outside of Yemen and perhaps, the young Bin Laden seeking to make a name for himself, another operation on the US mainland.

Image: Photo: A boy is seen at the site of an airstrike launched by the Saudi-led coalition in Sanaa, Yemen, February 1, 2019. REUTERS/Mohamed al-Sayaghi