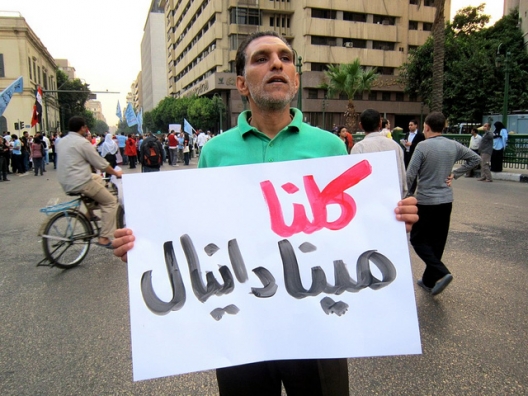 Photo: A man holds sign that reads "We are all Mina Daniel" in October, 2011 (Gigi Ibrahim)

I first met him in Tahrir Square, following the bloody events of February 2. On the day known as the Battle of the Camel, at least eleven were killed and over 600 wounded.  Mina Daniel, wounded earlier that day, was a Copt who struggled with other socialists for justice, freedom, and above all dignity for all Egyptians alike. Mina Daniel and I did not only share the collective identity of Tahrir but also the belief that being Coptic is not an ideology. Rather, fighting for the dignity of all humans was indeed an ideology, and a cross we were both happy to bear.

I ran into Mina a week before the October 2011 massacre of almost thirty Coptic protesters at Maspero. Citizenship rights of Copts should be tackled through inclusion and not through an exclusive fight, he told me that day. We decided that, although we are both against a Coptic movement per se, we would work to mobilize protests demanding citizenship rights. This was the last time I saw Mina alive.

His last Facebook status read: “Only the blood of the poor is spilled on this Egyptian soil.” He did not write about a Coptic struggle, as it was not his faith that defined him. Mina was a patriot, not a nationalist chasing the interests of any one group.

Nationalism and patriotism, although different in expression, share a common basis: the need for social attachment and loyalty. Nationalism can be defined as an ideology that provides justification for the existence or creation of a state. It defines a particular population and the relationship of the individual to the state. Patriotism, on the other hand, is a set of beliefs and attitudes that refers to the individuals’ attachment and loyalty to their country. The country here does not merely represent a geographic location, but a loyalty to one’s people and their land.

George Orwell defined nationalism as the habit of identifying oneself with a single nation or unit, placing it beyond good and evil, and recognizing no other duty than to advance its interests. Patriotism, he argued, is instead a feeling of devotion for a country and a culture’s way of life.

Loyalty to a group strengthens one’s identity and sense of belonging. Theories of cognitive development suggest that building attachments to groups is part of the normal socialization process as individuals move towards adulthood. There is a progression from being egocentric to increasingly sociocentric. Gradually, individuals develop a sensitivity to the needs and interests of others evidenced in voluntarily helping others, showing sympathy for them, and even defending them.

Loyalties transfer from smaller to larger entities, which means theories that explain loyalty within a group can be applied to larger entities like nations. Some argue that feelings expressed towards small communities are the seeds for stronger feelings expressed towards nations. The danger is, however, if loyalty becomes the critical building block for in-group amity and out-group hostility. Individuals can start identifying themselves through attachment to specific groups. They become more attached and sympathetic to some, and more critical and detached from others. This applies to any religious or ethnic group even within one nation, and is a distinct feature of nationalism, distinguishing it from patriotism that shows no hostility in the expression of love.

While patriotism is not always linked to a nation-state, nationalists characteristically rely on patriotism as a major source of loyalty and legitimacy. The leaders of states utilize patriotic sentiments that exist within the population, or create them if absent, to instill a nationalist ideology advancing the state’s interests. Orwell defined nationalism as the habit of identifying oneself with a single nation or unit, placing it beyond good and evil, and recognizing no other duty than to advance its interests. Patriotism, he argued, is instead a feeling of devotion for a country and culture’s way of life.

Growing up Coptic in Egypt tested my love for the country. I rejected the minority state of mind, and worked hard to defend what is mine: a place in my home. While, Copts have endured injustices, they are not alone. Women, the underprivileged, in fact anyone not aligned with the state—which defines itself through religion, geography, race, class and even gender—also suffered injustices. I refused to identify myself with a single unit or group, and was careful to distinguish the ‘nation’ from the ‘nation state.’ My devotion continues to be towards the nation–as in its ‘people’—diverse, yet united in dignity.

On October 9, 2011, as Egyptian state media incited against Copts, more than twenty-seven Coptic protesters, including Mina, were killed. Many were crushed under the wheels of army APCs on Egyptian soil. Only three soldiers were sentenced to two to three years in prison for involuntary manslaughter, while two Coptic protesters received two year prison sentences on charges of stealing weapons from the armed forces. The nation state, and even the Coptic Orthodox Church, ask us to forgive and forget for the sake of “national unity and healing.”

Forgiving and forgetting is difficult in the wake of the murder in February of twenty-one Copts, abducted in December 2014 by the Islamic State (ISIS or ISIL). The slaughtering of these Egyptians in Libya is not a first, but perhaps the most brutal and widely reported. The church, in its attempt to appear patriotic, served the nationalistic aspirations of the regime by keeping silent about previous incidents, while continuing to be vocal and critical of human rights activists and those demanding retribution.

The state is currently embracing the habitually excluded Copts under its nationalistic flag. The dignity of both Copts and the nation state, that murdered them more than three years ago, are now viewed as inseparable. We are expected to believe that state institutions, that either failed to protect Copts or actively violated their rights in sectarian incidents in Zawya al-hamra, al-Koshh, Atfeeh, and beyond, actually felt the need to avenge their deaths and dignity as if their lives mattered to the regime.

Through nationalistic notions, a state that promotes and embraces sectarian divisions can embrace those who have been excluded from moral consideration for humane treatment and dehumanized, changing the group’s identity and creating new pressures of conformity. For years, state violations against Copts and other marginalized groups in Egypt have been ignored or even strengthened by growing calls to exclude them morally. Their dehumanization renders atrocities committed against them acceptable, and makes the hypernationalistic reaction to their deaths even more unbelievable.

Nationalists may become ignorant to the point of self-deception. As Orwell describes, “The nationalist not only does not disapprove of atrocities committed by his own side, but he has a remarkable capacity for not even hearing about them.” By instilling nationalism in people, a nation state like the Egyptian state is able to commit atrocities against its own, but escapes the attention or condemnation of the majority. It is as if being crushed under tanks of your own national army in downtown Cairo is less undignified than being killed by ISIS on foreign soil. It is as if being killed by your own police as you queue for a football game or at a pro-Morsi sit-in at Raba’a al-Adaweya Square, does not violate the nation’s dignity, since after all it was the nation’s very own Egyptian police that killed Egyptian football fans. Hence, nation’s dignity remains intact.

There appears to be national support for a military response in Libya. Nationalists justify atrocities based on loyalty, which explains their silence when the nation state kills its own (in stadiums, during protests, in detention, or in Sinai) and their hostility towards the non-state actor who violates the dignity of the state through the slaying of its citizens, even if they are Coptic.

In “notes Notes on Nationalism,” Orwell explains the effects of nationalistic sentiment on the human way of thinking. He argues that every nationalist persuades himself that his side is the strongest, regardless of the facts provided against this. From this vantage of superiority, nationalists respond violently to any perceived threat from another group, because they realize they are serving a larger entity which provides them with a sense of security, and they are thus obliged to defend it.

The rise of nationalism in Egypt is in line with one of most common paradoxes of the contemporary world: The continuing and growing strength of nationalist ideology at a time when the limitations of the nation state are becoming increasingly apparent.

This weak Egyptian state came to power with no manifesto of change or social justice. It failed to deliver on several occasions: promising a fake AIDS cure that came to nothing, or a housing scheme that should have been completed by now, which instead has been put on hold indefinitely .  Instead, it continues to produce propaganda to instill a nationalist ideology so it can survive. The state needs its war on terror, and needs an enemy against which its people can unite. Such a weak state needs to divert public attention away from its atrocities, redefining the notion of individual dignity, and instead appropriating it to a collective dignity through the nation state.

With the rise of nationalism, we risk continued human rights violations internally, and involvement in military action externally, with an expected increase in deaths of Egyptians in both cases. We also risk the silencing of any opposition to the nation state and perhaps even holding them accountable for the weakness of the state. Achieving human dignity (meeting human needs and ensuring human rights) requires cooperative transnational efforts. This means that nation states must be prepared to expand their empathy and to think of global rather than national interests. A nation state that violates human rights of its own and needs nationalism to protect its existence will fight such cooperation and will continue to market itself as the sole provider of its nationals’ human dignity.

Soon such a nation state will hold the nation hostage. With no dignity, isolated and lonely they go about their mundane lives in fear (they call love), entertained only by lousy nationalist art, imaginary triumphant wars against imaginary defeated foes, and crucifixions of their saviors, patriots and freedom. The nationalism that thrived on love will be what crucifies it.

Dr. Sally Toma is a psychiatrist and a cognitive behavioral therapist specialized in the rehabilitation of victims of torture and sexual abuse. She was part of the Revolutionary Youth Coalition and co-founded the Kazeboon campaign that exposed the violations and lies of the Supreme Council of the Armed Forces and the Muslim Brotherhood regimes. She is also a founder of the Manifesto Initiative aiming to push for revolution projects, while training youths on political participation, rights and campaigning.