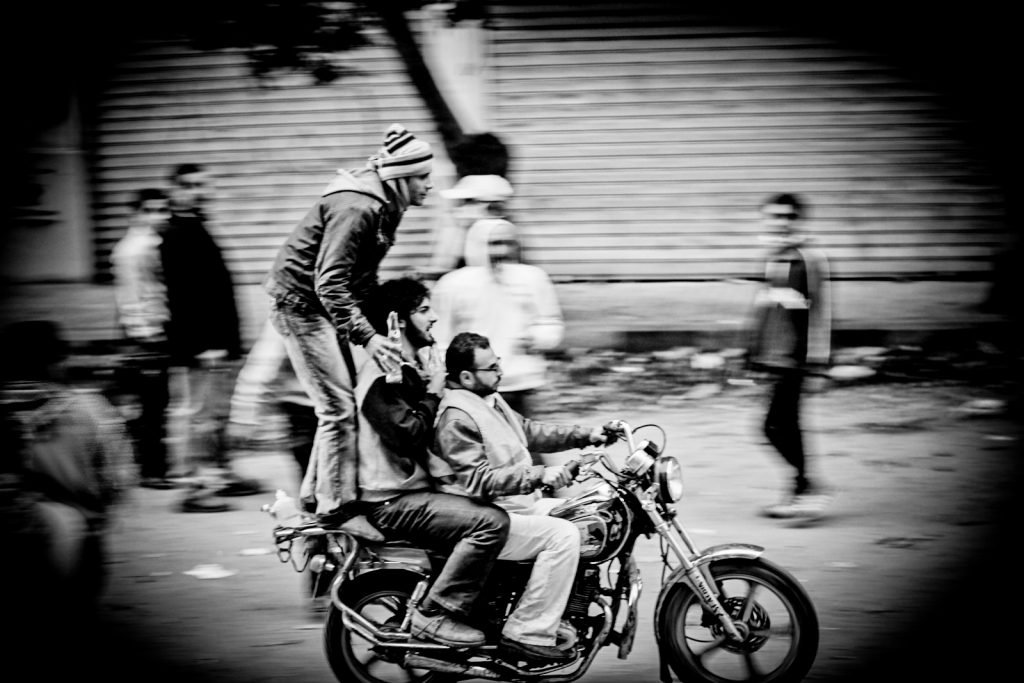 Faced with repeated violent crackdowns by the Supreme Council of the Armed Forces, Egyptian revolutionaries took to the streets one year ago today to voice their protest in what is widely regarded as the revolution’s second phase. The Mohamed Mahmoud clashes were to become Cairo’s bloodiest week since January 25. The violent dispersal of injured protesters from Tahrir Square sparked week-long clashes that left almost 50 people dead, and was also a crucial turning point in finally pressuring a resistant SCAF to set a date for the presidential election.

Despite the lack of a number of political contenders, most notably the Muslim Brotherhood – who’s absence left significant cracks in the already fragile relationship within revolutionary factions- non-stop clashes took places in Mohamed Mahmoud Street, among  other side streets surrounding Tahrir Square. While some secular forces suspended parliamentary campaigning during the clashes, the Muslim Brotherhood continued to prepare for the elections.

At the same time, huge protests continued to take place in Tahrir Square throughout the week, the carnival-like atmosphere at times standing in stark contrast with the violent battle being waged on the front lines of Mohamed Mahmoud Street.

Military strategies began to surface; telltales of their aim to weaken protesters determination. Most notable was  the targeting of protesters eyes; Ahmed Harara, who had lost one of his eyes in the peak of the revolution- on 28 January, lost his other eye during the November clashes, and became an instant revolutionary icon.

As the clashes raged on, former Minister of Defense HusseinTantawi appeared on television for the first time since the revolution and set an official date for the presidential and parliamentary elections. Following his appearance, the protests gradually fizzled out.

Violent clashes broke out on November 19 in Mohamed Mahmoud Street, off of Tahrir Square.

Police forces used extreme force during the clashes, from rubber to live bullets, all the while denying the use of ammunition on protesters.

Solidarity marches took to the streets with protesters wearing symbolic eye patches in solidarity with the dozens who lost their eyes. During the Mohamed Mahmoud Clashes, security personnel are believed to have continued to target protester’s eyes deliberately.

Egyptian activist Ahmed Harara lost one eye during the 18 day uprising that toppled Mubarak. During the Mohamed Mahmoud clashes, he lost his second eye.

The heroes of the Mohamed Mahmoud Clashes were its motorcycle drivers, rushing the wounded away from the front lines of the battle, to field hospitals set up in Tahrir to treat the many injuries.

A protester with several birdshot injuries evident on his face.

A Sheikh walks through the crowd in Mohamed Mahmoud, warding off tear gas shot at protesters with a small mask.

During the clashes, protesters reported severe reactions to the tear gas used by the police force. Symptoms, the kind of which were not seen during the 18 day uprising, included seizures.

The protesters showed resilience during the week of clashes. Many wore robust gas masks and helmets, preparing to face off with armed security forces.

A lone Egyptian flag is seen flying in the midst of smoke and tear gas during the third day of clashes.

Doctors were among the many that turned out in siginificant numbers both at the front line and in the field hospitals, identifiable by their white lab coats

A young protester’s face shows signs of the home-made remedy used to counter the effects of the tear gas.

Mosa’ab Elshamy is a freelance journalist based in Cairo covering news, events and current affairs. He has provided photos for numerous publications and websites.