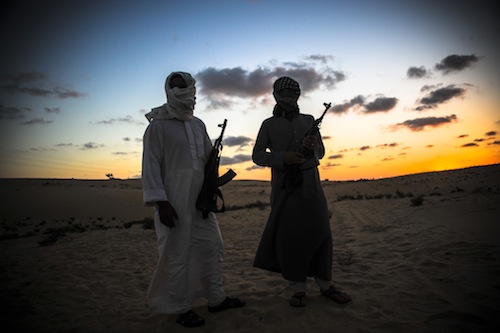 Army checkpoints on the road to Sinai are almost an indication of a region at war. The vast peninsula bordering Egypt with Gaza and Israel rose to the forefront of the new Egyptian government’s troubles after an army checkpoint was attacked by unknown militants last Ramadan, killing 16 soldiers. This was not the first attack of its kind in Sinia – the region has been a hotbed of militants long before the revolution, but even more so after the fall of Mubarak. This was, however, the deadliest attack seen in Sinai, and the first under President Morsi’s rule. Backed by public anger, the military launched Operation Eagle to hunt down those behind the attack. Different claims have been made regarding the outcome, but what is evident from my visit to the region is that little has changed.

All that Sinai has become notorious for – smuggling of weapons, torturing Africans and rise of militancy – remains unchanged. The army had also declared its intention to close down the tunnels connecting Sinai to the besieged Gaza strip, but in Rafah economic activity is booming with trucks full of goods coming in and out of the town almost every hour of the day.

The same lack of security along with rise of Islamist extremists led to yet another sectarian attack on the Coptic minority in Rafah, causing many to flee for their lives, almost 2 years after their church was burnt by armed militants.

The flow of weapons into Sinai increased significantly following the security vacuum in Egypt during and after the revolution. Most weapons came from Libya or were smuggled in from Israel and Gaza.

Jeremie ِAl Masouh, one of Sinai’s most wanted militants, was convicted to 125 years in prison for a number of offences, most prominently his kidnapping of American tourists. He claims he is innocent of most of the crimes he was charged with, and that during the Mubarak-era, it was easy to frame Bedouins for crimes they did not commit.

Bedouins drive on bikes in the temperate area of Jabal Al Halal in Northern Sinai, a hotbed of outlaws close to the Egypt-Israel border.

Evidence of the destruction caused in the town of Muqata’a in Northern Sinai during clashes between militant jihadis and the army, as part of the ongoing Operation Eagle.

The Egyptian side of Rafah city is home to smuggling activity through underground tunnels that keep the besieged territory alive with goods coming in on daily basis. Residents of the town almost completely rely on smuggling, with few becoming millionaires as a direct result of this activity.

A traveler crosses to Gaza through a tunnel from the Egyptian side of Rafah. Despite the army’s declaration of closing down tunnels after the Rafah attack, despite the fact that it wasn’t proven that attackers were from Gaza. The tunnels are still largely active.

Coptic resident of Rafah Mamdouh Nassif’s shop had to close down after it was attacked by unknown militants. Mamdouh, along with other Copts in Rafah had received a written warning days before the attack threatening they would be harmed if they do not leave the city.

The destroyed church of Rafah, attacked by gunmen during the revolution and abandoned since.

Inside the destroyed State Security Headquarters of Rafah. The building, loathed by the city residents, had witnessed numerous cases of torture under Mubarak, with Islamists a frequent target. It has left a deep sense of hostility between the Bedouins and the state.

Image of the deposed Hosni Mubarak in a burin the destroyed passport office of Rafah. The building, along with other ones belonging the state were all attacked by gunmen during the 18 days of the revolution.

Islam, brother of Sheikh Mohammed of Mahdeyah displays a picture of saved African migrants and himself before they traveled back to their homes, thanks to the efforts of himself and his brother.

Sheikh Mohammed of Mahdeyah shows a video he took on his phone of torture marks that was left on the bodies of African migrants he saved.