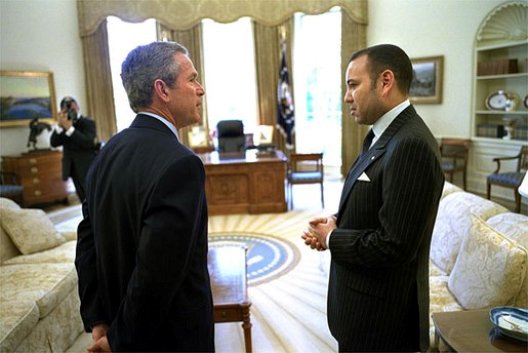 On the eve of Moroccan King Mohamed VI’s visit to the United States, observers of Moroccan-US relations are keeping a close eye on the first high-level visit between the two countries’ leaders since US President Barack Obama took office. King Mohamed and Obama are scheduled to meet on Friday, November 14, at which time they will discuss US support for Morocco in “countering violent extremism, supporting democratic transitions, and promoting economic development,” according to a White House statement. The issue of Western Sahara, one of the most protracted conflicts in the region that has remained a point of tension between Morocco, Algeria, and the Polisario Front, will no doubt enter the conversation. Since 1979 the United Nations recognized the Polisario as the legitimate representative of the Sahrawi people in the Western Sahara, but some question the legitimacy bestowed on it. The group has behaved as a resistance group to Moroccan authority, using Algeria as its base. This highly contentious topic has divided analysts and strategists for decades, with arguments that center around issues related to human rights, identity, sovereignty, security, and representation. Mehrunisa Qayyum and Nabil Ouchagour represent two opposing points of view, examining a central question: Is the Polisario a legitimate power broker in Western Sahara?

Tensions between Algeria and Morocco reignited on the thirty-eighth anniversary of the Green March, when Morocco reclaimed the Western Sahara territory left behind by Spain in 1975. Although ongoing tensions between Morocco and Algeria over this issue contribute to the perception of a binary conflict, the reality is that three concerned parties—including the Sahwari Polisario Front, the representative body originating from the territory—have a stake in a final resolution.

The Western Sahara Conflict epitomizes how two governments equally use political posturing to assert their regional influence. Algeria’s president, for example, called for “the establishment of an international mechanism to monitor human rights in the Western Sahara,” on November 1. Shortly after the Algerian President’s statement, Morocco recalled its ambassador from Algiers and a group of protesters tore down the flag at the Algerian consulate in Casablanca. To be fair, many Moroccans condemned this action, but in the words of a fellow Moroccan blogger, the conflict is as much about the transparency of the Polisario Front as much as it involves the resolution of a territorial dispute. Nonetheless, the Polisario is recognized by many African countries and UN Security Council members, so questioning their legitimacy only delays negotiations.

Because human rights groups like Amnesty International have repeatedly voiced human rights concerns on behalf of Sahwaris, one may applaud high-level validation. However, some may also say that the Algerian government uses the human rights platform to embolden the Polisario Front and justify arming them. (Others argue that the Algerian president’s statement was more about appealing to his internal base than it was about the rights of the Sahwari people.) On the other hand, it is also hard to overlook the cost of between 40,000 to 150,000 refugees living in southern Algeria. The human cost of this protracted conflict only increases the urgency of the need for a durable solution that includes the Polisario.

Both Morocco and Algeria need a “face-saving” solution. Since 1975, a climate of distrust between Morocco and Algeria has plagued international negotiation efforts. The first attempt at resolving the dispute occurred in 1991 where Special Envoy Christopher Ross undertook shuttle diplomacy between all parties, including the Polisario Front. The United Nations tried again in July 2003, calling for a referendum on self-determination by the Sahrawi population. Termed as the Baker Plan, the UN mission proposed that the Western Sahara population, the Sahrawis, could resolve their status via legislative and judicial branches in the Moroccan government. The plan would grant Western Sahara five years of autonomy and a general amnesty for earlier human rights violations on all sides. After five years, another referendum would include three options: independence, integration, or continued autonomy.

However, Morocco could not accept the option of independence, countering with its own proposal stipulating that the population could only vote on its autonomy in the Morocco Autonomy Plan. According to Wikileaks, the United Nations Security Council members were not impressed with Morocco’s proposal, but half-heartedly endorsed it when no other option appeared acceptable. The problem, however, lies in that the details of the plan allowed Morocco to retain full control over the territory and the right to exploit its natural resources—a prospect that would destroy the Polisario’s credibility among the Sahrawis if accepted.

Despite the economic gain in keeping the resource-rich territory of the Western Sahara, the social, economic, and political costs should convince the Moroccan authorities of the need for a genuine consideration of an independence option. Given the extent of humanitarian concerns as highlighted by international watchdog groups, an equitable solution should supersede national identity disagreements.

Any solution would require a return of refugees to the territory, which further complicates the issue. Given the unreliable data available, no definitive calculations can yet be made to estimate the numbers (or the cost) of the returnees. Reintegration would also require substantial humanitarian aid, but donor-beneficiary politics add another hurdle resolving who might manage the funds and a final resolution by extension.

Sadly, the most pertinent incentive to address the Western Sahara conflict, and its related humanitarian crisis, derives from the focus on the Western Sahara population turning into easy recruiting targets for the al-Qaeda in the Islamic Maghreb (AQIM). Critics of Morocco argue that Morocco purposely frames the territorial dispute with Algeria as an effort to stem terrorism. Likewise, critics of Algeria argue that if Sahwaris gain independence, then they will operate as a satellite of Algeria.

For those that condemn the Polisario Front, it is worth asking: if not Polisario, then who? Where is Morocco’s internal opposition that can formally participate in the debate—even at a national level? According to the 2012 Freedom House report, independent media face restrictive press laws or penalties specifically regarding the Western Sahara. There must be a better rallying cry to address this issue, or the other parties, like the Polisario Front or Algeria will respond with equally demonizing tactics while referencing human rights abuses.

On thirty-eighth anniversary of the Green March, King Mohammed VI delivered a speech that signaled a clear determination to move towards a solution for the conflict in Western Sahara using unusually direct language. The King said that, despite hopeless attempts by Morocco’s foes to undermine its reputation and sovereignty, the Kingdom will continue its cooperation with the UN Secretary General, his personal envoy, and sister nations. “Our goal is finding a final political solution to the artificial conflict over our territorial integrity, within the framework of our autonomy initiative which has been recognized for its seriousness, credibility, and realistic spirit,” the sovereign added.

The speech was also an opportunity for underlining reforms and large-scale national projects, adding, “Morocco is committed to positive and interactive cooperation with international human rights bodies which are unbiased in dealing with issues and accept constructive criticism. However, Morocco refuses that some organizations use isolated incidents to undermine its image or trivialize its human rights and development achievements.”

Morocco’s introspective and self-critical capacity to realize the creation of representative institutions to launch participative approaches offers hope to resolving the conflict in Western Sahara. Using the same participative approach as the Moroccan National Human Rights Council—a body whose work was praised by international institutions—the Moroccan Economic, Social, and Environmental Council published a report detailing a novel regional development model for the kingdom’s southern provinces. Drawing on a serious assessment of the country’s economy, education, culture, and governance, the report suggests concrete solutions for the development of its southern territory.

The European Union is also concerned with development of Moroccan southern provinces. As one of the few Mediterranean countries tied to the commission by a very close partnership program, French politician and member of the European Parliament Gilles Pargneaux published an article arguing that, despite Morocco’s need to enhance its efforts towards promoting democracy, it remains among the most progressive countries in a troubled Arab region. Pargneaux all but explicitly expressed his support for the Moroccan Autonomy plan, emphasizing that the protracted conflict has caused enough harm.

Given demonstrated efforts on the part of the Moroccan government to address the concerns of Sahrawis in the south, many Moroccans feel slighted by the United Nations’ insistence on treating the Polisario as a legitimate power broker. The Polisario has shown little transparency or commitment to democratic principles over the years. Its unelected leaders have not changed and its relations with al-Qaeda in the Islamic Maghreb (AQIM) suggest an ongoing threat to regional stability. Futhermore, the International Court of Justice had recognized legal ties between Morocco and Sahara’s tribes. Although the United Nations plays an undoubtedly important role in conflict resolution in the region and around the world, its misguided recognition of the Polisario will taint its work in Western Sahara. The voices of all people in this region matter, but the United Nations must ask if the Polisario can legitimately claim a role to speak in the name of the Sahrawis.

For all the criticism of the Moroccan authorities over democracy, Morocco has succeeded since the Green March in maintaining the unwavering unanimity of its people over their territorial integrity for which they are mobilized and ready to make all sacrifices. As King Mohammed VI said in his last speech, “The Sahara issue is every Moroccan’s cause with no exception. It is everyone’s duty.” A recent Atlantic Council report about “Morocco’s Vital Role in Northwest Africa’s Security and Development.” In the context of the upcoming visit of King Mohammed VI to the United States, Peter Pham, the Africa Center’s director, argues that Morocco’s willingness to shoulder the challenges in the Maghreb and the Sahel makes it an important strategic partner for the United States. Morocco has greatly contributed to regional peace, and its proposals should be taken seriously in negotiations with the international community.

Mehrunisa Qayyum is a freelance international development consultant and editor of PitaPolicy, a blog focusing on the political economy of the Middle East and North Africa.

Nabil Ouchagour is a Moroccan communications strategist and columnist, and previously served as a ministerial advisor and public relations consultant.