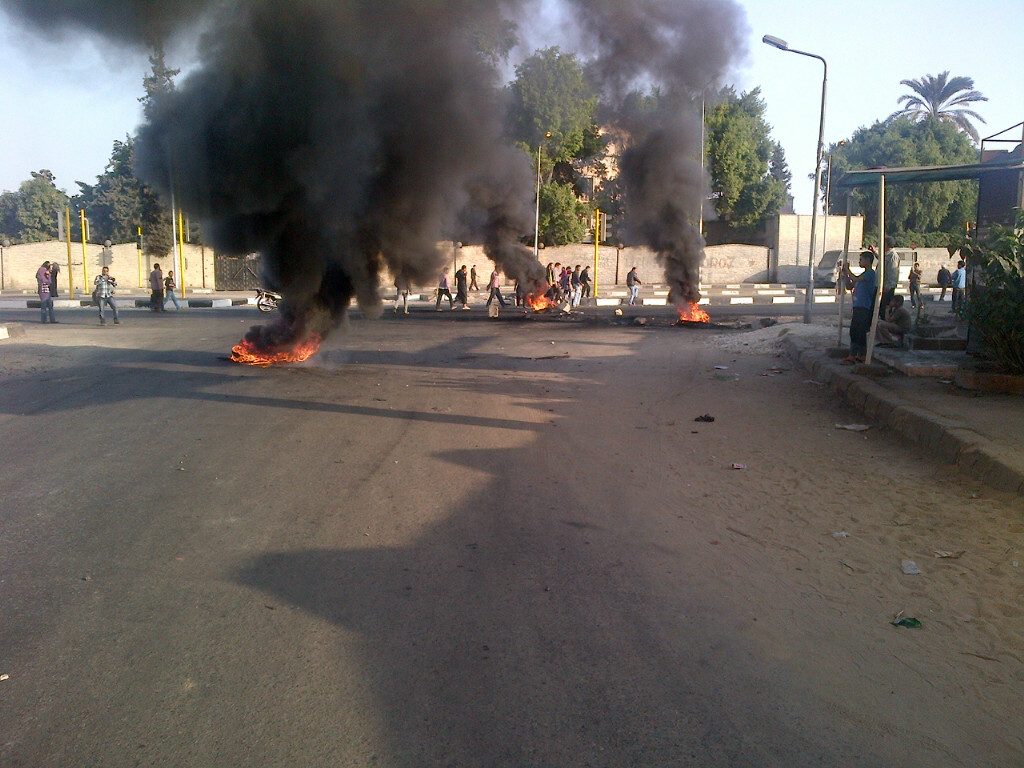 At four in the morning, the troops sprung to attack, chanting “Allahu Akbar” (God is Great) as they razed all in front of them, electrocuting people, firing at those who jumped in the Nile water to escape their wrath. They trashed houses, smashing windows and mirrors, overturning bedrooms and kitchens. One man was killed, tens remained missing after jumping in the Nile and others were taken away for detainment.

This is what happened on Sunday at dawn on the island of Qursaya – a Nile enclave that sits beside a vital throughway in southern Cairo – as the military annexed a large swathe of land that has been locked in a dispute with the residents for years. Residents responded furiously, not by taking on the army troops, but rather by blocking the neighboring highway for the entire day, appealing for help from authorities.

The aftermath of the attack on homes in Qursaya

Another resident, Khaled, said, “They came at us chanting Allahu Akbar as if we were not Egyptians, as if we were a foreign enemy that they were invading and occupying.” When the residents blocked the highway at Bahr El Aazam, police commanders went to negotiate for the reopening of the road, which the residents acquiesced to for an hour before closing it again, having surmised that their grievances would only be taken seriously if the road remained closed.

The background to this incident is that residents have been locked in a dispute with the army over this stretch of the island since 2007, when the army set up makeshift barracks. A court ruling in 2010 gave residents the right of use of the land and after the revolution, the army presence thinned considerably, only for the troops to return in greater force a mere two days before the dawn attack.

There are two issues behind this incident; the first is that the state has never granted many Egyptians in certain areas ownership of the land they are living on, such as the Qursaya islands and Sinai. Generations have grown up there, houses built, crops cultivated but the state refuses to acknowledge this on paper. Residents have brought in water and electricity to the island themselves, they pay their bills but still their homes are not officially their own.

The army uses the stretch of fertile land it holds to grow crops, the produce of which it sometimes sells to the residents. A longstanding issue during the Mubarak era, there has been no intent to tackle this issue or rectify it post-revolution.

The second issue pertains to continuous army impunity after the revolution, not just during the transitional period it oversaw, but even now after a democratically elected president has assumed office. The reason this continues can be traced back to the grand political compromise that was struck between most political forces – the Muslim Brotherhood eminent amongst them – and the military when it came to lack of accountability for Egyptian deaths during the transitional period, at the hands of the army and the police.

In order for there to be a political process that would ensure army-supervised elections of the legislature and executive, cynical politics trumped the revolution’s goals and ideals, and calls for justice. Because there was no accountability for army crimes against civilians – detailed at great length in a recent Amnesty International report – the institution sees no deterrence in doing as it pleases, its impunity continues unabated.

Even though the Muslim Brotherhood president Mohamed Morsi removed the top two military generals Hussain Tantawi and Sami Anan for their imposition on his legislative power, there has been absolutely no inclination by the incumbent government or the political power that it is affiliated with to bring retroactive justice, or prevent such things in the future. This is despite its insistence that it is a revolutionary government, mandated with achieving its aims and aspirations.

The anniversary of the Mohamed Mahmoud clashes is upon us, one in a long series of brutal clashes between protesters and either police or army forces (and often both) in which no one was held accountable for the deaths, the injuries, the violence and destruction.

The revolution in part occurred because of grievances such as the ones held by the residents of Qursaya. A grand political bargain ensured that it is as tough to attain their rights now as it was before the revolution. For the sole reason of living where they are living, they are killed, beaten and terrorized by an institution that remains unaccountable even after “democracy” has come to Egypt.

Abdel-Rahman Hussein is an Egyptian journalist based in Cairo. He has been reporting from Cairo for eight years and has been covering the recent events in Egypt since they started on January 25th. He is the author of the blog, Sibilant Egypt.