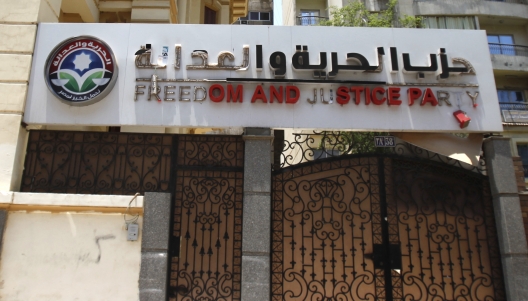 The events of July 3, 2013 that ended with former President Mohamed Morsi’s ouster, brought with them a concerted effort to remove Islamists not just from rule but from political life altogether. This stands in stark contrast with the opening of Egypt’s political space to many new political currents and groups in 2011, arguably the greatest achievement of the January 25 uprising. This flourishing of political participation resulted in the creation of many new parties reflecting the diversity of Egyptian political life.

After decades of authoritarianism in which it was near impossible to form new parties (there were no more than nineteen parties in the Mubarak era, most of which were formed by judicial decree), the Supreme Council of the Armed Forces (SCAF) succumbed to political pressure. On March 28, 2011, the interim government amended the Egyptian Political Parties Law No. 40 of 1977. Under the new law, political parties can be formed by providing a judicial committee with written notification.

As a result, the number of parties rose quickly to more than eighty. These parties represented the four main political currents: Islamist, liberal, nationalist and leftist. Most notable of these were the more than eleven Islamist parties that emerged in the wake of the uprising. These included the Freedom and Justice Party (FJP), established as the political arm of the Muslim Brotherhood in May, 2011, as well as the Nour Party, the political arm of the Egyptian Salafi Call.

Perhaps political Islam’s significant electoral victories – especially the FJP and Nour parties – in two constitutional referendums, two parliamentary elections, and the presidential elections, pushed many liberals and nationalists to view Islamists as enemies and to treat them as such. Political rivalries and hostility between the Islamist and non-Islamist parties also increased due to   successive Islamist failures in power, both in the two houses of parliament and at the presidential level under Morsi.

Since Morsi’s ouster, lawsuits have become the weapon of choice used against Islamists. Dozens of lawsuits were filed in various Egyptian courts seeking to dissolve or ban Islamist political parties. In September of 2013, a legal ruling was issued by the Cairo Court for Urgent matters  to “ban the activities of the Muslim Brotherhood and confiscate their funds.” In April of this year the Alexandria Court for Urgent matters  issued a ruling banning Brotherhood and FJP members from running  for presidential or parliamentary elections. This was achieved by mandating the president of the High National Election Commission to reject nomination papers from anyone proven to be affiliated with the Muslim Brotherhood. The most significant judicial ruling, however, was issued on August 9 last year from the Supreme Administrative Court, officially and permanently dissolving the FJP, a final decision that may not be appealed. To carry out these earlier rulings, on October 9, the prime minister issued a decree forming an administrative committee to execute the judicial rulings to dissolve the FJP, in addition to banning the activities of the Brotherhood and confiscating their funds. A judicial decision does not require a committee to be formed by the prime minister, so it is not clear why this step was taken.

A significant lawsuit is currently before the Alexandria Court of Urgent Affairs, with a verdict expected on November 26. In this case, the plaintiff representing the so-called “Popular Front for opposing the Brotherhoodization of Egypt” is seeking to dissolve all political parties established “on a religious basis.” The plaintiff in this suit has identified a list of eleven religiously-based parties, most notably: the already dissolved Freedom and Justice Party, the Salafi Nour Party, al-Wasat al-Jadid (New Center), al-Fadilah (Virtue), al-Asalah (Authenticity), Masr al-Qaweya (Strong Egypt), al-Watan (Homeland), al-Bina wa al-Tanmiya (Construction and Development), and ‘Aml al-Islami al-Masri (Egyptian Islamic Work).

These lawsuits raise a number of questions, the first of which relates to which court is competent to adjudicate this type of case. According to article 17 of the Egyptian Political Parties Law, as amended in March 2011, the First Circuit of the Supreme Administrative Court is the only court competent to adjudicate party dissolution cases. It is therefore useless to file suits to dissolve political parties in the Alexandria Court for Urgent Affairs, a non-competent court, or any other court. Moreover, according to the Political Parties Law, the right to file lawsuits seeking the dissolution of a political party rests solely with the president of the Political Parties Committee and he exercises this authority only after approval of the members of the Political Parties Committee, as was the case with the FJP dissolution. Therefore, the anticipated verdict in this case must be a rejection of the suit due to the court’s lack of competency, and because the plaintiff lacks standing to file suit seeking dissolution of parties.

The other aspect of this lawsuit relates to the basis for the demand to dissolve parties “established on the basis of religion as this contradicts—according to the plaintiff’s opinion—article 74 of the Egyptian Constitution as amended in 2014 that states: “It is not permissible to practice any political activities or establish any political party on a religious basis…” This is not the first time this article has impacted the establishment of political parties in Egypt. This text was included in the Egyptian Political Parties law after its amendment in 2005, and was thus in force in 2011 when all the Islamist political parties were established, At that time, the Political Parties Committee did not object, and so these Islamist parties were established in accordance with the law and “not established on a religious basis.” The pressing question in this context is what, then, gives these parties a religious basis in the view of the plaintiff. Similarly, it is not completely clear what is intended by ‘establishing parties on a religious basis’ as there is neither a firm legal definition for this nor a set of judicial rulings establishing this definition. This leaves wide room for interpretation that will be determined, more than likely, by the prevailing political reality.

Image: Photo: A view of the damaged entrance of the Muslim Brotherhood's Freedom and Justice Party (FJP) headquarters, which is located in front of the Interior Ministry, after it was attacked by people against ousted Egyptian President Mohamed Mursi in Cairo July 4, 2013. (Amr Abdallah Dalsh/Reuters)