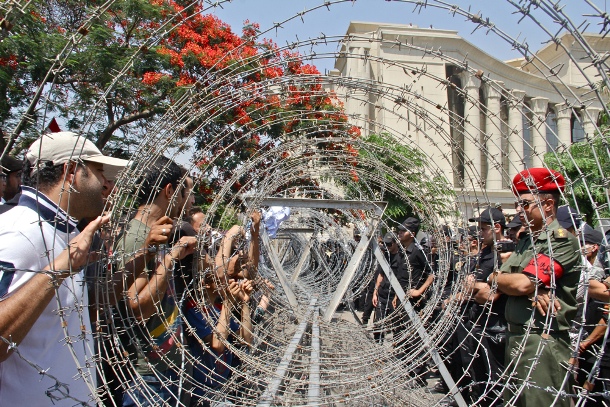 Egypt is caught in the midst of a tense standoff between two factions – with politics on one side, and the law on the other. The struggle is being played out in the legislative space, as legal experts and politicians attempt to interpret the courts’ decisions and the provisions of the law.

Skirmishes have included the Supreme Constitutional Court’s (SCC) ruling to dissolve Egypt’s parliament, and the violation of that decision by the People’s Assembly, as well as decrees issued by President Mohamed Morsi, only to have them revoked by that very same court, while elected bodies continue to file legal appeals for their own political purposes.

After 18 months of a revolution, the power struggle in Egypt has moved from the country’s streets to its courtrooms. The tear gas and rubber bullets used against the revolutionaries and youthful protesters have been exchanged for verdicts. Law and politics have merged, turning Egypt’s political crisis into one distinguished by its judiciary veneer, and Egypt’s courts have become a dueling arena for its political rivals.

In mid-June, the SCC ruled on the unconstitutionality of the electoral law under which the People’s Assembly (the lower house of parliament) was elected. The ruling was specifically in regards to the fact that parliamentary members belonging to political parties had vied for the one third of the seats allocated to independent candidates. This invalidated the legitimacy of the Egyptian parliament, allowing Field Marshal Mohamed Hussein Tantawi, the head of the then-ruling Supreme Council of the Armed Forces (SCAF) to issue a decree dissolving the elected body, while simultaneously retaining the military junta’s right to issue legislation. At the same time, the Political Isolation Law, originally passed by parliament, was struck down by the SCC, consequently allowing for Ahmed Shafik’s candidacy in the presidential elections. These moves were viewed by many as an attempt by SCAF to stifle the further advancement of the Islamist political parties within governmental institutions, after their dominance in the Lower and Upper Houses of Parliament, several professional associations and labor unions, as well as, at the time, competing for the presidential seat, with the Freedom and Justice Party’s candidate, Mohamed Morsi.

A few days later, SCAF took advantage of its newly regained legislative power to issue a constitutional addendum, limiting the presidential powers and preventing the elected leader from having any say in the appointment or dismissal of SCAF members. It also gave the military the right to form a constituent assembly in the event that the existing one was unable to complete its task. The current Constituent Assembly also happens to be under threat of dissolution, by the order of the administrative court, a case which is currently on hold, with 20 appeals filed against it by lawyers belonging to the political movements supporting a civil state.

President Mohamed Morsi’s decree revoking Field Marshal Tantawi’s decision to dissolve parliament, calling for the parliament to reconvene, provoked widespread and harsh criticism, only to end with another decision from the SCC, striking down the presidential decree.

The President responded in a statement, reiterating his respect for the constitution and the law, expressing an appreciation for the ostentatious Egyptian judiciary and its honorable judges, while also speaking of a commitment to the court’s rulings, and his keen interest in managing relations between governmental authorities, in order to prevent any sort of conflict.

The current legal conflict between the presidency and the SCC is also a political struggle, with SCAF and the supporters of a civil state on one side, and President Morsi, the Muslim Brotherhood and varied Islamist parties on the other.

At the same time, a fear has been roused amongst those calling for a civil state, fueled by the fact that political parties rooted in Islamic ideology managed to secure 70% of the seats in the Egyptian parliament, while the newly elected President Mohamed Morsi, is also a member of the Muslim Brotherhood, and was the first leader of the organization’s political arm, the Freedom and Justice Party.

Observers have pointed out that Morsi is battling to regain his powers and to restore the legitimacy of the parliament, in order to implement his electoral platform. This has led to a legislative struggle between Islamist political parties striving for power and SCAF, backed by a desperate political movement calling for a civil state.

The consecutive rulings by the SCC, as well as those by other Egyptian courts, and the presidential decree to reinstate parliament, have all flung open the door to debate among legal experts of different affiliations and beliefs. We have witnessed varied interpretations of these legal decisions, despite the fact that most of them should only be open to one interpretation, far from any controversy or confusion.

Some attribute the current legal crisis to the struggle between revolutionary and counter-revolutionary forces, with supporters of the former regime within the judicial system attempting to obstruct Morsy’s path as president, and overturn his decisions.

Many also believe that supporters of the counter-revolution are using the media, as well as the SCC, to weaken state institutions, as they have weakened the legislative ones. Now they are attempting to surround the president on all sides, so to speak.

With the politicization of the court and the manipulation of its rulings for political gain, it can be said that Egypt’s politicians have degraded the law for the sake of their limited interests, which is an indicator of the very disintegration of the rule of law in Egypt. It would then be impossible to convince the average citizen to respect these laws, when their politicians do not. As a result, Egypt could witness the collapse of its legal system, and any dignity and respect it once commanded.