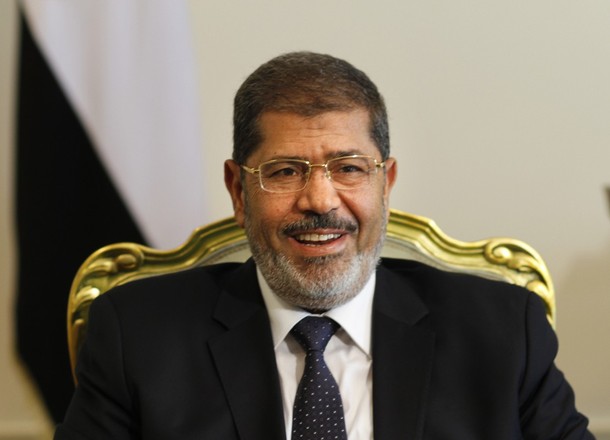 Ramadan is often a time for Muslims to practice the virtue of patience. This year, however, not only do they have to practice patience while refraining from food and water, they must also learn to observe the same virtue when it comes to their newly-elected, slow-moving and bureaucratic president, Mohamed Morsi.

This has proven to be a challenge for Ahmed Waguih a 25-year-old taxi driver, and an active participant in the uprising, who has little patience for Morsi: “I am ashamed that our revolution has led to the election of Morsi,” he says. Speaking with Morsi’s former colleagues in the Faculty of Engineering at Zagazig University, where he once taught, a more personal portrait of the new president begins to emerge, and it is a far more flattering picture than one Waguih would provide.

One anecdote mentioned by some of his colleagues involves Morsi reading any document that required his signature at least 10 times before signing it. They describe him as non-confrontational, eager to please all, and during his 9 year tenure as the head of the department, if any matter required discussion, the final outcome was one which all parties could agree on. Not one to enforce regulations to the letter, in the face of someone else’s mistake, Morsi was the first to try to find a solution. While his former colleagues welcomed these qualities in a professor, these are not qualities looked for in a president. The presidential position requires him to be quick on his feet and decisive, while deliberation and patience quickly become negative traits.

During his electoral campaign, Morsi made over sixty promises focusing on five areas of concern: security, traffic, bread, sanitation and fuel. Thirty days into his presidency, the chance of achieving these promises within the allotted 100 days seems slim. To date, only one initiative has been implemented, with an attempt to clean up ’s streets beginning a few days ago. The approach, however, involved a weekend of volunteering, and the results of the campaign will likely last no longer than a week. The initiative did not provide an institutional solution, tackling the very root of the problem. As for his other promises, the streets in every city are still plagued by chaotic traffic and a lack of security, while Egyptians now face the added problem of daily power outages.

Morsi waited 26 days before naming his Prime Minister, after which he chose Dr. Hesham Kandil, who was serving as the Minister of Irrigation and Water Services in Kamel El Ganzouri’s cabinet. Kandil’s appointment could become the epitome of Morsi’s rule, bringing only a fragile sense of that much-needed stability, if bringing it any stability at all. Kandil himself has apparent ties to the military regime; they assigned and worked with him on Nile Basin issues, projects which are said to be run by Egypt’s General Intelligence Service. He is also believed to be sympathetic toward the Islamic movement, and can be described as a bureaucrat. He has not brought success to any of the issues he has been personally responsible for, and it is not even clear if he is a supporter of the revolution.

Kandil’s appointment should be a warning sign for the country’s political forces, particularly those who announced their support for Morsi in the election run-offs, with the creation of the so-called ‘National Revolutionary Front’. Morsi promised to choose an independent and patriotic candidate for the position of Prime Minister, as well as to consult with these political forces on the selection of the government, ensuring representation of all political factions. He also vowed to review the formation of the Constituent Assembly, and to appoint a Copt and a woman as his vice presidents. It would seem, so far, that there will be little difference between Morsi’s promises and those made earlier by the Muslim Brotherhood, all of which have been broken.

Many analysts have interpreted Morsi’s presidential decree to reconvene parliament as the beginnings of a conflict between SCAF and the president, the latter backed by the Islamist political movement. It is, however, becoming clear that the Muslim Brotherhood president is far more aligned with SCAF, than he is with the country’s revolutionary forces.

Hamdi Kandil, a member of the ‘National Revolutionary Front’ said that, speaking about the symbiotic relationship Morsi told him, “SCAF needs me, and I need them.” This is an accurate description of the relationship that exists between the two, despite Morsi’s attempt to reinstate parliament, which was struck down by the . There exists between the Muslim Brotherhood and SCAF a far-reaching relationship, one which has seen Morsi protecting members of SCAF. In the lead up to the presidential elections, anger mounted in regard to SCAF’s handling of the transitional period, with many demanding the trial of its members. Morsi, however, has reinforced the image of the army as the protectors of the revolution and democracy, and thanked SCAF members for their efforts, which he stated ensured the success of the uprising. This description lies in stark contrast with the idea that SCAF has been an enemy to the revolution, a belief held by many of those who participated in the uprising.

Morsi, and the Islamist parties, need the army in order to ensure their continued political dominance in . They are, for all intents and purposes, in the same boat, with a shared view that liberal democracy is a threat not only to their interests, but also to keeping afloat.

Magdy Samaan is a journalist working at the Daily Telegraph’s Cairo bureau. He was a 2011 Visting Fellow at the Atlantic Council’s Rafik Hariri Center for the Middle East. Mr. Samaan has previously worked as a correspondent for the Egyptian independent newspapers Al-Shorouk and Al-Masry al-Youm as well as Al Jazeera, reporting on politics, religious minorities, and US-Egypt relations.