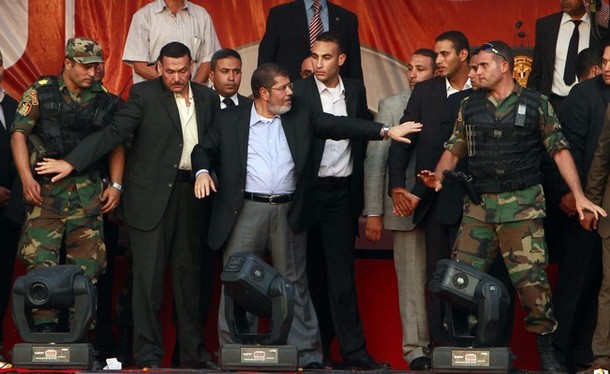 As president-elect Mohamed Morsi’s speech was coming to an end in Tahrir Square, two soldiers could be seen trying to form the beginnings of a human barricade in front of him, at the edge of the stage. Morsi promptly pushed their hands away, stepped forward and lifted his arms, waving at the crowds chanting beneath him.

The gesture, while a reminder that Morsi does not fear his people the same way his predecessor Hosni Mubarak did, it is also a reminder of a far more limiting and invisible restraint that the ruling military has placed on the president-elect.

Morsi’s speech was an attempt to appease all the major players in Egypt’s political scene, while also sending a message of defiance to SCAF. It may have hit the right notes with the tens of thousands of people gathered in Tahrir, but it remains to be seen if it will have any real effect.

“You are the source of the legitimacy and power, above all,” Morsi told the crowd, a direct reference to the June 17 constitutional addendum which has, in fact, placed SCAF above all. The people responded with an enthused, “Morsi is president of the republic.”

Morsi began his speech by addressing Egypt’s Muslims and Christians, promising to be a president for all of the people, and to preserve the country’s civil state. He went to great lengths to allay fears that many have about a Muslim Brotherhood rule, referring on numerous occasions to the country’s “artists and intellectuals.”

He also promised to work to free all civilians who have been tried by military tribunals in the past 16 months, with some earlier estimates placing that number at well over 13,000.

In what has been described as a nod to the more conservative Salafist movements, he promised to work for the freedom of Omar Abdel Rahman, a blind sheikh convicted in 1993 for the World Trade Centre bombing, and sentenced to life in prison in the U.S.

Reciting the same oath that he will take on Saturday, Morsi added, “I will look after the interests of the people and protect the independence of the nation and the safety of its territory.”

Morsi also touched upon foreign relations, promising to “keep the peace” and improve relations with Egypt’s neighbors in the region, while working to ensure the rights of Egyptians living abroad.

As Morsi left the stage, the crowd was loudly chanting against military rule. Nonetheless, Morsi is scheduled to swear his formal oath on Saturday morning before the Supreme Constitutional Court, in keeping with SCAF’s wishes, after which he will deliver his inaugural speech at Cairo University. The oath was originally to have been taken in front of the country’s elected body of representatives, the parliament, but with the court decision to dissolve parliament earlier this month, a struggle over the venue was Morsi’s first symbolic opportunity to go head to head with the ruling military.

Activists, including the April 6 Movement, withdrew from the Friday protest, expressing their disappointment in Morsi’s decision to go ahead with SCAF’s choice of venue, viewing it as the legitimization of the June 17 constitutional addendum.