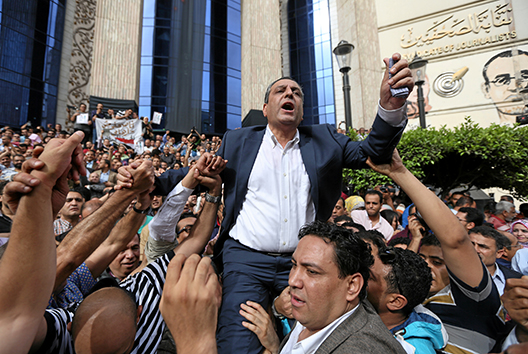 Shortly after unprecedented jail terms were issued against leading members of Egypt’s Press Syndicate, President AbdelFattah al-Sisi approved a new press law, sparking further concern over the future of a relatively independent media in the country.

After the approval of a new Constitution in 2014 that guarantees freedom of expression and press, Egyptian journalists hoped, for the first time in over 60 years, that professional standards would govern the process of picking board chairmen and editors of newspapers, providing them with some independence and guarantees. They also hoped a new law would abolish jail terms for publication offenses for journalists, replacing them with financial fines, and provide guarantees for freedom of access to information.

In October, 2014, then-Prime Minister Ibrahim Matlab tasked 50 prominent journalists and media experts with debating a new press law. They spent over a year working on the law in the hopes that the parliament, once elected in early 2015, would approve it immediately. The draft law called for forming three supervisory bodies to regulate newspapers and television, as per the constitution, while ensuring that the majority of candidates who run those bodies were independently selected rather than by the state. It also outlined guarantees for the freedom of the press and abolished jail terms for journalists performing their jobs.

However, the parliament ignored the draft law for a year, and in December, it suddenly emerged that a number of pro-government deputies had drafted their own bill. The new law governs the formation of the three regulatory bodies outlined in the constitution, but articles on freedom of the press were relegated to another law that has yet to be drafted. Osama Heikal, a close advisor to Sisi who was appointed information minister by the Supreme Council of the Armed Forces (SCAF) in 2011, claimed that the move came following an advisory opinion by the State Council, that is tasked with reviewing the constitutionality of all laws before they are approved by parliament. Heikal added that the new bodies would have the chance to draft the second law one month after their formation – but there is no guarantee that this will happen.

Most worrying for Press Syndicate Chairman, Yehia Qallash, and many journalists is the process of selecting the three bodies that will control the press and television in Egypt. While each of the three bodies is made up of 13 members, the appointment of the majority of their members remains in the hands of the president, the government, and the House of Deputies, where Sisi enjoys wide support.

The Press Syndicate and Media Syndicate (another new body formed in the law for television and radio journalists) will only choose four of the members of the three bodies, while the president picks the chairperson of all three bodies, as well as two “public figures or experts” in the Supreme Council, and three in the two other bodies. Government ministries, such as the ministry of finance, investment, and communication, will have their own representatives, as well as two members that are to be appointed by the House of Deputies – the vast majority of whom support Sisi. Finally, the Supreme Council for Universities and the State Council (judiciary) will each pick one. “In a best case scenario, the Supreme Council will include seven members picked by the state, and six independents,” Qallash told MENASource.

“The new law that was approved by parliament and President Sisi ended any hope that we will have balanced, independent bodies,” said Gamal Fahmy, a journalist, who took part in the 50-member committee that drafted the first law. “The state clearly has a majority in all three bodies, and it’s the same old story all over again,” he told MENASource.

Sisi has repeatedly stated that at a time that Egypt has faced a wave of terror attacks and severe economic hardships, the role of the media should be to back the state and mobilize the public behind the president’s declared goals. “I envy President Nasser. He had all the media on his side,” Sisi said a few months after he became president. And since, journalists and private television channels have come under intense pressure to follow the state line. Presenters of popular television shows who aired opposition or critical views disappeared from Egypt’s television screens, starting with Bassem Youssef, who presented a late night comedy show, followed by journalists Reem Maged, Yosri Foda, Dina Abdel-Rahman, and Lillian Dawood. Dawood, a Lebanese national was deported to Beirut with her personal bag less than an hour after her contract with independent channel ONTV ended.

The latest victim in this fallout among popular television presenters is particularly alarming. Ibrahim Eissa was a strong supporter of the ouster of Morsi and the Brotherhood’, and was even given the first opportunity to interview Sisi when he was running as a candidate for president in early 2014. Nevertheless, after Eissa attacked an agreement Sisi signed with Saudi Arabia in April handing over to Riyadh two strategic Red Sea islands, Tiran and Sanafir, there was little tolerance among government circles for his critical views. Eissa also lashed out at the parliament after a number of deputies said they wanted to change the constitution to allow more military trials in light of ongoing terror attacks, and expand the presidential term to six, instead of four years.

Eissa came under harsh criticism: the Parliament’s Speaker of the House lashed out at him, and a lawyer filed a complaint against him, accusing him of incitement.  Meanwhile, Member of Parliament Anwar Sadat, speculated that Eissa’s positions led to a backlash against his employer as well. The Ministry of Interior cancelled Le Marche, an annual major furniture fair organized by Tarek Nour, the owner of Al Qahera wal-Nas on which Eissa appeared, just three days before it was set to open. Later, the Ministry of Electricity announced that it was canceling a contract with Nour’s advertising agency to run an awareness campaign on conserving electricity.  Eissa eventually suspended his show, saying it was a suitable move, “given the realities of the present moment.” A statement from Al Qahera wal-Nas said the move was in order for Eissa to focus on his writing.

Meanwhile, the Chairman of the Press Syndicate, Qallash along with two syndicate board members, await for the final ruling in the case filed against them, for allegedly providing refuge to two opposition journalists who attacked the agreement with Saudi Arabia.

Qallash, and Press Syndicate board members Khaled Balshi and Gamal Abdel Rehim, were all referred to trial, and were sentenced on November 19 to two years in jail. They appealed the ruling and their trial resumed on December 25. “We expect a sentence very soon,” Balshi told MENASource. “Qallash’s term ends in March, as well as half of the board of members including myself. The state clearly wants to influence our chances in competing in the upcoming elections, and to silence our voices,” he added.

Image: Journalists carry Yehia Kalash, head of the Egyptian press syndicate, during a protest against restrictions on the press and to demand the release of detained journalists, in front of the Press Syndicate in Cairo, Egypt May 4, 2016. (Reuters)