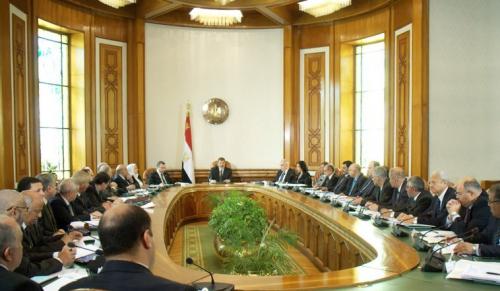 Nine new ministers were sworn in Tuesday after a minor cabinet reshuffle was announced, following several days of delays. The nine ministries affected by the changes are the ministries of justice, parliamentary affairs, petroleum, antiquities, agriculture, finance, planning, culture, and investment.

Minister of Justice: Mohamed Ahmed Suleiman
Following Minister of Justice Ahmed Mekki’s resignation on April 21, he has been replaced by Mohamed Ahmed Suleiman. Suleiman obtained his license to practice law from Cairo University in 1972 and graduated with a masters in shari’a and legal studies in 1977. He held the position of assistant to the former justice minister for judicial studies and president of the Court of Appeals. He was appointed as representative of the public prosecutor’s office in Assiut and Minya before starting his judicial track in 1981. Suleiman worked as an adviser to the Court of Appeals until 1992 before being seconded to join the Abu Dhabi Federal Court in the UAE. After his return in 1998, he resumed his advisory position in Assiut before moving up to the Court of Appeals in Cairo. He was seconded again to Abu Dhabi in 2004 at the Institute of judges and Judicial Studies.

Suleiman headed the Minya branch of the Judges’ Club from 2002-2004, and 2011-present. He has had repeated public spats with Cairo Judges’ Club president Ahmed al-Zind, issuing statements condemning al-Zind for his opportunism and lack of respect for judicial independence.

He is a strong advocate of judicial independence, and among the judges who stood against Mubarak in 2005. He also opposed President Morsi’s November constitutional declaration in November. In 2011, he opposed the constitutional draft, mainly due to the provisions limiting judicial authority. He also opposed granting the military the power of arrest over civilians. In December 2012, he led the Minya Judges’ Club in its refusal to supervise the constitutional referendum until Morsi withdrew the declaration, citing infringement on judicial authority.

Minister of Investment: Yehia Hamed Abdel-Samie Hamed
One of three economic ministries seeing a change in the reshuffle, Yehia Hamed, replaced Osama Saleh, as Minister of Investment. The former spokesman for Morsi’s presidential campaign was one of the nine remaining presidential advisers as well as a founding member of the Freedom and Justice Party’s Foreign Relations Committee. Born in 1978, he is one of the youngest ministers in Morsi’s cabinet.

Hamed holds a master’s degree in Public Administration from the Arab Academy for Science and Technology. Prior to his political career, he worked in marketing at Vodafone Egypt. His business career also includes work in subsidies, development and civil society.

Minister of Parliamentary Affairs: Hatem Abdallah Bagato
One of the most controversial appointments in the cabinet reshuffle, Judge Hatem Abdallah Bagato replaces Omar Salem as Minister of Parliamentary Affairs. While the name of Assistant of Justice Minister for Legislative Affairs Omar al-Sharif was originally floated for the position, Bagato’s appointment came as a surprise to all.

Bagato was Secretary General of the Presidential Elections Commission (PEC), Under-Secretary of the Ministry of Justice, former Vice President of the Supreme Constitutional Court (SCC), and head of the SCC’s advisory board. He was also among the SCAF-appointed judges who drafted the amendments to the March 2011 Constitutional Declaration, and was among the 8 judges, along with Tahani al-Gibali, who were removed from their SCC positions with the passing of the new constitution, with the number of judges reduced from 19 to 11.

The Muslim Brotherhood has been openly critical of Bagato, identifying him as one of the remnants of the Mubarak regime within the judiciary who was standing in the way of drafting laws the conform to the “demands of the revolution.” The smear campaign against Bagato even involved a revelation that he is related to Amr Moussa.

Bagato also clashed with members of the Islamist-dominated parliament during preparations for presidential elections, halting work after what he deemed were insulting statements made by the parliament about the PEC. A more serious standoff between Bagato and the now-dissolved parliament was seen over propose legislation that would change, among other things, the court’s legal review process. He described the proposal as a “new massacre of judges,” and accused the parliament of intimidating the courts for personal gain, as well as attempting to take away the court’s oversight on legislation.

Believed to have close ties to the Muslim Brotherhood, since 2008 Hadarra served as the vice president for a German-Egyptian company that manufactures oil API centrifugal pumps. He has also taught at several Egyptian universities and the Arab Academy for Science and Technology. In 2010, he joined Alexandria University’s Community Service and Environmental Development Committee. 7 months ago, he was appointed the head of the petroleum authority, the Egyptian General Petroleum Corporation, Egypt’ s national oil company of Egypt which owns 70% of shares in the Egyptian Natural Gas Company. A month after his appointment, the EGPC announced $1.7 to $2 billion in financing to “help EGPC cover dues to foreign oil partners and sustain imports of petroleum products,” but it has been put on hold pending the completion of Egypt’s negotiations with the International Monetary Fund for a $4.8 billion loan.

Born in 1953, he earned his Bachelor’s Degree in Mechanical Engineering from Cairo University in 1976, and went on to complete management courses at the University of Michigan and the University of Virginia. He is fluent in English, French and Italian.

In both his Masters and PhD, as well as in consequent studies, Eissa has shown a particular interest in Islamic architecture and its effect on Coptic architecture in Upper Egypt, focusing on the Ottoman and Fatimid periods.

In one of his first statements as minister, Eissa said that his priorities are the development of the ministry, as well as “purging” it of corruption. He has already announced the development of a plan to restructure the ministry and its management of financial resources, in order to complete stalled projects, and bring an end to the encroachment threatening Egypt’s archaeological sites.

Eissa is a member of the Islamist party, al-Wasat. The party has issued a statement saying that Eissa’s appointment was as a technocrat, reiterating the fact that the party itself had its reservations about participating in the cabinet reshuffle. Al-Wasat party spokesman Amr Farouk added that the party will not be asking Eissa to refuse the position.

Born in 1948, al-Gizawi received his bachelors and masters degrees as well as his PhD in Agricultural Sciences from Ain Shams University. He also received a diploma in seed technology from the University of Edinburgh, and spent 4 years doing research at the University of Birmingham. Another academic in the list of new ministers, al-Gizawi worked his way up from the position of a teacher’s assistant, to become the Dean of the Faculty of Agriculture at Ain Shams University from 2002 to 2007, after which he took on the position of a full-time professor. Al-Gizawi is a member of the Muslim Brotherhood’s Freedom and Justice Party, where he heads the party’s Agricultural Committee.

Minister of Finance: Fayad Abdel Moneim Hassanein Ibrahim
Fayad Abdel-Moneim Hassanein Ibrahim was appointed Minister of Finance to replace El-Morsi El-Sayed Hegazi. Prior to his appointment as minister, Ibrahim served as President of the Economics Department at al-Azhar University. He earned his Master’s and PhD from the same university, the latter of which focused on Islamic banking.

Foreign Policy points to Ibrahim’s biography published by a Bahraini company where he served as a ‘Sharia Advisor,’ which also lists him as a consultant for the legal accounting department of Dar al-Ifta and a member of the board of Islamic Studies at the Faculty of Science at Cairo University. He also served as a manager for the Islamic Economic Center for Research, and did consultancy for a variety of organizations including the International Islamic Investment and Development Bank in Cairo and the Center for Economic Consultancies and Studies (MFS). He wrote and co-authored several Islamic finance studies, among them “Selling Profit in Islamic Banks” and the Encyclopedia of Islamic Economic Terms. He has also conducted research on international economic crises “from an Islamic economic perspective.”

After the FJP was founded, Darrag served as the party’s secretary in Giza, and is currently the Chairman of its Foreign Relations Committee. He also served as as secretary-general for the Constituent Assembly that drafted Egypt’s current constitution. In 2011, he ran for a parliamentary seat in Giza, but lost to his liberal opponent, Amr al-Shobaki.

In November, after President Barack Obama’s re-election, Darrag issued a statement in which he said he was “optimistic” about the future of Egypt-US relations.  He said, "We look forward to a US foreign policy that is both fair and balanced, and an Egyptian-US relationship that is all balanced as well. We hope mutual relations between the two countries would not be forced through an Israeli portal, like the QIZ agreement, under which a certain proportion of Israeli-made components must be in Egyptian products for them to be exported to the USA. Certainly, there are Egyptian-US interests that do not require Israel to be involved as a partner."

During violent clashes in the wake of the two-year January 25 anniversary, Darrag held other political forces responsible for the incident. He said “political forces are required to show responsibility, and declare clear condemnation of the violence committed.” In the wake of sectarian clashes in Dahshur, Darrag stated that the incident was blown out of proportion, saying “Sadly, there are those who want to magnify the incident, and wish to turn it into sectarian strife.”

While not a member of the Freedom and Justice Party, he recently published an article in the party newspaper last January in which he criticized the protests that took place in the vicinity of the presidential palace, and expressed his support for Mohamed Morsi.