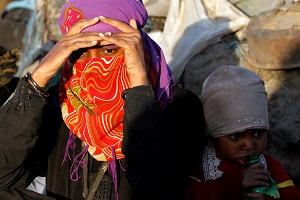 To say that Yemen is facing a humanitarian crisis is an understatement. Numerous agencies are struggling to provide aid to a population in desperate need, but aid can only be as effective as the willingness to protect Yemen’s civilian population. That willingness has been lacking on all sides of this multi-sided war. Without civilian protection, building trust between the belligerent parties to reach even a cessation of hostilities, much less a long term, sustainable peace, is impossible.

It is true that Yemen’s humanitarian catastrophe does receive periodic (but still too infrequent) mention in the press by humanitarian agencies and close followers of the war. But the gravity of the problem does not seem to have resonated with most US politicians or among the population in general. Perhaps it is war fatigue, or perhaps it is too challenging for many people to follow multiple crises across the region and elsewhere. To be sure, Congress has in recent months begun to address the US role in the conflict, questioning the sale of arms to Saudi Arabia and the cost on civilian lives in Yemen. Senator Chris Murphy (D-CT) has been an early and consistent voice in this regard. But the White House’s continuation of US support for the Saudi-led coalition through intelligence sharing and mid-air refueling missions—and of course continued arms sales—suggests it has little interest in the war’s cost on civilian lives.

And that cost has been devastating. UN agencies and human rights organizations repeatedly note that twenty million Yemenis are urgently in need of humanitarian assistance, with seven million of them on the brink of famine. A massive Cholera outbreak has seen more than 750,000 infected and nearly 3,000 related deaths in the past year, even as the UN OCHA Cholera Integrated Response Plan for Yemen has struggled to minimize the number of deaths. Yemen’s crumbling infrastructure worsens the crisis, including the failure of Sanaa’s sewage system last spring and the destruction to ports, roads, and other means of moving supplies to needy populations. As much as a third of the population relies on aid for basic food stuffs.

The Saudi-led blockade, now in its third week, has shut down the ability of humanitarian relief agencies—already struggling to keep up with a cascading problem—to reach the majority of the population. The Saudi-led coalition allowed the Aden airport to reopen after two days, creating the hope for aid to reach needy civilians in nearby regions. But the blockade remains in place on other essential points of entry, including the Hodeida port and Sanaa airport, which are located in areas controlled by the Houthi-Saleh alliance at war with the Saudi-led coalition. The reality is that the opening of the Aden port has had little effect on the northern regions, where the bulk of the population resides. And as OCHA stated, even a fully functioning Aden port would never be adequate as a single-entry point because it lacks the absorption capacity to handle a significant amount of aid shipments.

The problem is not only getting goods into the country, but that the patchwork areas of control by various factions create significant obstacles to moving goods and supplies within Yemen. While civilian lives are sometimes discussed as collateral damage inadvertently caused by warring parties, that suffering is routinely disregarded by the responsible parties in the name of winning the larger war. But as the International Crisis Group has aptly demonstrated, the Saudi-backed coalition is utilizing the human cost of the war as a tool in the conflict.

Protecting civilian populations does not only mean providing food, health services, and relieve to war-ravaged areas. In early November, the UN Humanitarian Coordinator for Yemen, Jamie Mcgoldrick, recounted a list of only the most recent incidents that cost civilian lives: In Saada governorate alone, 31 were killed including six children in an air strike on a busy market in Saada; 7 were killed in a strike on a home 2 days later, including 2 children and 2 women. In the ravaged city of Taiz, 5 children were killed in shelling on a residential neighborhood. All this in a single week; choose any other week and the tallies are often as devastating or worse.

Under such conditions, Yemenis have struggled to survive, turning to whatever means are available to provide any support, however meager. As we know from this and other conflicts, that often means that communities are forced to turn to groups controlling local areas, whether militias or groups like al-Qaeda and the Islamic State. The failure to provide protection for civilians is a gift to such groups, who can use their strength and channels to build support among otherwise reluctant populations.

Indeed, even if peace negotiations were to resume, they could not be successful as long as civilian casualties remain high and the majority of the population struggles to survive under such precarious conditions. No party to the conflict is ever likely to stop fighting and enter negotiations as long as the civilian populations dependent on them for survival are being systematically ravaged.

Yemen’s war, now entering its third year, is multi-sided, a reality that merits attention in alleviating the current suffering as well as in devising a long-term peace process. The current UN plan continues to recognize only a two-sided conflict, and one in which only one side—the Saudi-backed coalition—is viewed as having legitimate claims. This is not an approach that can achieve peace.

The political reality on the ground—from the real complexities of the war to the toll on civilian populations—must be addressed now and in the future. In the long-term, peace and reconstruction for Yemen is at stake. In the immediate term, the protection of the civilian population may be the key to whether a long-term peace is ever possible.

Jillian Schwedler is Nonresident Senior Follow at the Hariri Center for the Middle East at the Atlantic Council, and Professor of Political Science at Hunter College, City University of New York. Follow her Twitter @DrJSchwedler.