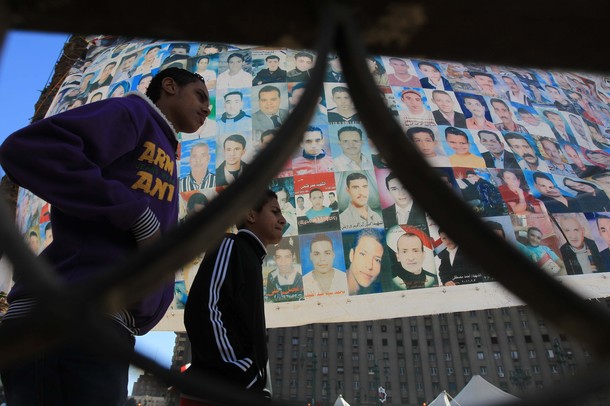 Protests in Tahrir Square continued as part of today’s "Day of Rage."

1) The crowd of tens of thousands in Tahrir Square is swelling as protesters rally for a planned Day of Rage to demand an end to military rule and justice for victims of the revolution. Resentment of the Muslim Brotherhood and FJP is growing after its members were criticized for inappropriately celebratory displays on a day that many viewed as a somber commemoration of the victims of the revolution. Brotherhood members distributed colored balloons around Tahrir Square on January 25 and also hosted a marriage on the FJP’s official podium. After the conclusion of Friday prayers on January 27, protesters began calling for Brotherhood members to leave their stage and “get out” of the square.

2) Sam LaHood, the son of U.S. Transportation Secretary Ray LaHood, and several other members of the International Republican Institute have been barred from leaving Egypt, as the Ministry of Justice continues to investigate NGOs accused of accepting illegal foreign funding and destabilizing the country. [LA Times, English, 1/27/2012]

3) Brotherhood Supreme Guide Mohamed Badie stated on January 26 that parliament has the right to hold the army accountable and reduce its budget. Badie added that as the SCAF’s partner in protecting the revolution, the Brotherhood would hold the SCAF accountable for its mistakes but at the same time preserve prestige and dignity of the armed forces. [al-Ahram, English, 1/27/2012]

4) Leading members of the Brotherhood and its Freedom and Justice Party have reportedly opened channels of communication with some former Mubarak cabinet ministers and members of the now disbanded NDP. The objective, according to one Brotherhood source, is to "understand some files and to listen to those who ran the country." The same source stressed that the talks should not be interpreted as a sign of any deals in the making between the Brotherhood and former regime officials. [al-Ahram, English, 1/27/2012]