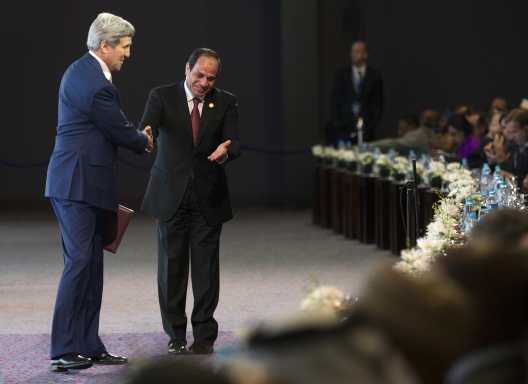 Egypt launched its three day economic conference in Sharm al-Sheikh on Friday, with thirty heads of state in attendance. In the first day, over $13 billion in aid was pledged to Egypt, the bulk of which has come from the Gulf countries of UAE, Saudi Arabia, and Kuwait. Find out more about the first day of the conference in this Q&A.

Who is taking part?

112 countries are represented at the conference, with 2,500 participants, 775 companies, and thirty heads of state participating.

Among the over 700 companies taking part in the conference are:

Turkey, Iran and Israel were not in attendance as the three countries were not invited. Egypt’s Foreign Ministry said in a statement that they were not invited because the “criteria [of participation in the EEDC] do not apply to them in terms of the value of their investments in Egypt.”

What has been pledged so far?

Investment Minister Ashraf Salman said Egypt expects to sign agreements worth up to $20 billion at the summit.  The ministry of transportation alone aims to attract investments worth $4 billion through nine projects.

So far, the following pledges ($12 billion from just Kuwait, UAE, and Saudi Arabia, and another $1.2 billion from others) have been announced:

What other deals are being discussed at the conference?

Smart Village is negotiating with over fifteen companies for renting and buying office space.

What projects are being showcased at the conference?

A complete list of the fifty projects being showcased can be found here. Participants were also presented with Egypt’s five year macroeconomic strategy, and with information on Egypt’s investment laws and sectors with the highest potential.

Specific projects being showcased include:

What has the Egyptian government announced prior to the conference?

What has the Egyptian government announced during the conference?

The livestream of the conference is available here.