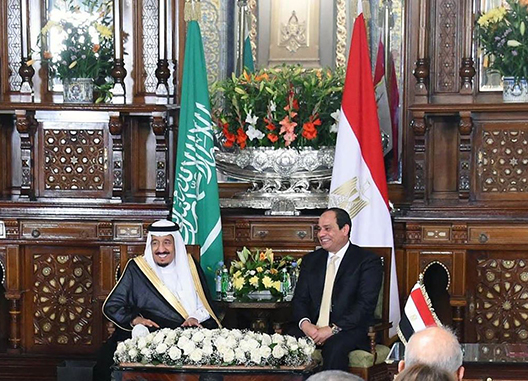 During King Salman’s recent visit to Cairo, Saudi Arabia and Egypt signed several investment agreements and cooperative deals, including a 60 billion Saudi Riyal investment fund. Among the more notable elements of the bilateral agreements are a proposed bridge that would link Saudi Arabia and Egypt through the Red Sea, and Egypt’s decision to cede two islands in the Gulf of Aqaba to Saudi Arabia. These two agreements set off a firestorm of controversy in Egypt, igniting a debate on social media over whether Egypt’s President Abdel Fattah al-Sisi ceded too much for too little in negotiations.

How was the decision made to hand over the islands to Saudi Arabia?

The Egyptian cabinet announced Sunday that members of a joint Egyptian-Saudi technical committee tasked with determining the jurisdiction of the islands revealed that they fell within Saudi Arabia’s maritime borders. The cabinet said that its decision came after almost six years of negotiations, including eleven rounds of discussions with Saudi officials.

What is the significance of the islands?

The uninhabited islands are located five miles from the Egyptian and Saudi coasts, at the southern point of entry to the Gulf of Aqaba, where both Israel and Jordan have ports. They once comprised the eastern border between British-controlled Egypt and the Ottoman Empire, and were transferred to Egypt from Saudi Arabia in 1950 as part of a broader strategy to keep them out of Israel’s hands. The islands were briefly controlled by Israel in 1967 before being returned to Egypt after the signing of the Camp David agreement between the two countries in 1979. 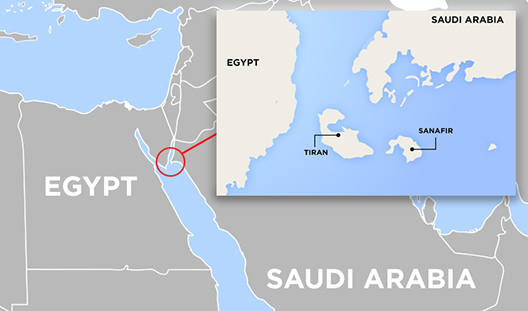 How will this deal impact Egypt, Saudi Arabia, and their neighboring countries?

According to the Egyptian cabinet, the maritime border agreement with Saudi Arabia would still permit Egypt to use shared Red Sea waters for the excavation of natural resources, which would benefit Egypt’s economy.

As part of the 1979 agreement between Israel and Egypt, the islands are a limited arms zone, where only the Multinational Force and Observers (MFO) and Egyptian police are permitted, although Egypt cannot station military forces on them. The 1979 agreement also allows Israel full maritime access to the Red Sea through the Straits of Tiran. According to Israeli newspaper Haaretz, Egypt informed Israel about the decision to hand over the islands in advance, and one Likud lawmaker signaled that the agreement would not threaten Israel. Israel reportedly asserted that it would not oppose the deal as long as Israeli ships were guaranteed free navigation in the area, and the rest of the commitments of the 1979 treaty would be honored. Sources at the Israeli Foreign Ministry also reportedly said that Israel is studying the legal status of the islands and will announce its official stance on the issue after the release of an inclusive judicial opinion, adding that Israel could potentially discuss the matter with Egypt if necessary.

Saudi Foreign Minister Adel al-Jubeir said in a recent interview that the Kingdom would honor the established terms of the 1979 agreement, but added that Saudi Arabia would not directly negotiate with Israel over the islands having already made commitments to Egypt.

The agreement will now be presented to the parliament, which must decide whether to ratify it in accordance with Article 151 of the new constitution. MPs will form a special committee to review the deal, and while some agree that the islands are rightfully part of Saudi Arabia’s territory, others insist that any final agreement should be put to a vote in a public referendum.

How have Egyptians responded to the deal?

Egyptian lawyer and former presidential candidate Khaled Ali filed a lawsuit with Egypt’s administrative judiciary challenging the legality of the border agreement and calling for its annulment before it reaches the parliament for ratification. An administrative court has already scheduled the first session for the trial on May 17.

Ali also issued a statement together with former presidential candidate Hamdeen Sabbahi, along with dozens of other political leaders, rejecting the deal. Egyptian political scientist and columnist Amr Hamzawy, meanwhile, stated on Twitter that while the Egyptian government should have addressed the issue with greater transparency, he believed the cabinet’s final assessment of the islands as falling under Saudi Arabian territory was “accurate.” Political analyst Negad al-Borai was critical of the decision however, arguing that the government could not relinquish land for any reason, especially without having held a referendum first.

At least five people were arrested Sunday in Cairo’s Talaat Square during a small public protest against the deal. Security forces released them a day later.

What is known about the plan to build a bridge connecting Egypt and Saudi Arabia?

During his visit, King Salman also announced that the two countries had reached an agreement over the building of a bridge that would span the Gulf of Aqaba in the Red Sea and link both countries. In his announcement, he hailed the bridge as a “historic step” that would connect the continents of Africa and Asia. The location of the bridge, which at Sisi’s suggestion would bear Salman’s name, was not specified, but the agreement revives a similar proposal dating back to 2007 made during President Hosni Mubarak’s tenure, which was later abandoned due to concerns over security and potential environmental degradation as a result of the construction. Earlier proposals for a bridge also called for the integration of railways running parallel to road lanes, linking both countries’ high speed railway systems.

In this plan, the bridge would have passed through Tiran Island, one of the two islands ceded to Saudi Arabia as part of the current deal. The cost of the current proposed causeway has been estimated at $3 to 4 billion. In his historic address to the Egyptian Parliament, the first of its kind by an Arab leader, King Salman said the bridge would “boost Saudi-Egyptian trade, provide job opportunities for youth in the region…and serve as a pathway for pilgrims.” Sisi said at the joint press conference that an “agreement of mutual cooperation will be a paradigm shift for the upcoming generations of both countries.”