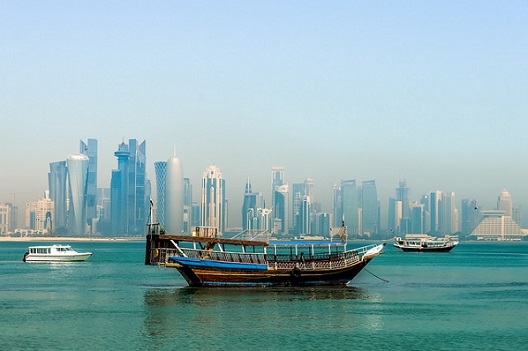 Hanging in Qatar’s museum of modern art are several works by Faraj Daham—nature scenes painted on the circular steel lids of oil drums. In the background of these paintings—literally and figuratively—is Qatar’s oil industry. The artworks stand out because they reference, however obliquely, a topic central to Qatar’s political reality. They stand out amid the prevailing preference in local galleries for abstract art—art that is merely decorative, mute about contemporary life.

Thus it was a huge surprise last week to learn of a new museum dedicated to a deeply sensitive topic: slavery in the Gulf. More surprising still, the museum is excellent. The slavery museum, one of four heritage museums built as part of Doha’s massive Msheirib Downtown project, had been kept under wraps and is not yet open to the public. The VIP ribbon cutting ceremony led by Sheikha Mouza bint Nasser, chairperson of Qatar Foundation, allowed prominent Qataris the opportunity to view the completed exhibits firsthand, before opinions formed elsewhere.

The exhibit unfolds in three wings, the first exploring the slave trade in antiquity and the origins of slavery in the Indian Ocean. Practiced for centuries, slavery of the Indian Ocean littoral accelerated in the 19th century with booming global demand for pearls and dates. Matthew S. Hopper, author of Slaves of One Master: Globalization and Slavery in Arabia in the Age of Empire, describes how the opening of the Suez Canal and other factors opened the lucrative US market to Gulf dates. A holiday-season date fad gripped America from the 1890s (the New York Times used to cover the annual “date race” from Basra to New York) and by 1925 Americans were importing 80 million pounds of Gulf dates annually. Date production was labor intensive, requiring roughly one worker per hundred trees to maintain irrigation systems. By the turn of the twentieth century, the Gulf cultivated approximately 50 million date trees. As a corollary, it is estimated that in 1905 17 percent of the population of coastal eastern Arabia was African. (By comparison, at that time African Americans accounted for 11 percent of the US population.)

The museum’s second wing narrows from the broader Gulf to slavery in Qatar. Though sparsely populated and poor, Qatar’s coastal waters held some of the Gulf’s richest pearl beds, which formed the mainstay of the local economy. Through text and short films, the exhibit traces the source of the slaves (East African, mostly), their perilous transport by sea or (worse) overland, and the types of work they endured as domestic servants and pearl divers. It is particularly courageous to speak honestly about the realities of pearling—an industry that, throughout the region, is shrouded in a sentimental, nostalgic narrative that nearly always neglects to mention the black bodies working on the boats. The second wing of the exhibit closes with a powerful display on the path to abolition, the “Underground Railroad” to Bahrain, the formal end of slavery in 1952, and the integration of freed slaves into Qatari society. Particularly powerful is the collection of manumission documents issued by the British mission in Bahrain, providing first-person slave testimonies rich in historical detail. (See, for example, the 1927 statement of Marzooq bin Saad, kidnapped at thirteen in Zanzibar by an Omani slaver and sold in Dubai to a pearling captain.)

If the exhibit ended here (as many on the preview tour anticipated) it would have been a qualified success: revealing of the past, suggesting connections to the present, and opening an important conversation. But the exhibit continues onto a third wing—“Modern Slavery”—that draws an explicit connection to the contemporary scourge of human trafficking, contractual enslavement, and the kafala system—the sponsorship regime that governs foreign labor in the Gulf. One placard, detailing modern forms of indentured servitude, states, “Many construction workers in rapidly industrializing parts of the world, especially the Gulf region, are considered to be contractually enslaved.”

Without shying from Qatar’s complicity, the exhibit places worker welfare in the larger, global context of forced labor in the industries of manufacturing, construction, agriculture, and sex work. This context is important because, in many ways, it is not that labor exploitation in Qatar is unique, rather it is highly visible. Unlike many post-industrial nations where unappealing aspects of the global economy are farmed out overseas, in Qatar—a country where rapid development is omnipresent, where 94 percent of the workforce is foreign, and where the World Cup has drawn extra scrutiny—brute aspects of global capitalism sit closer to the surface.

Placing forced labor in its global context also drives productive conversations about reform.  Many Gulf locals bristle at the suggestion that the Gulf is exceptionally malevolent, making it a difficult topic to discuss. “Who built the railroads in the American West?” a Qatari asked me, rhetorically. Or, more to the moment: Who assembled your iPhone? Or, who picked your tomatoes? Foreigners often level criticisms of the Gulf from a counterfeit position of moral superiority. While an unaware hypocrite might speak the truth, he is not particularly convincing.

This is not to say that Qatar does not maintain egregious, systemic faults. It does. And the newly announced kafala reforms will not fix them. (The issue is not only the laws on the books, but the strength of monitoring and enforcement mechanisms.) Nor would it imply that fault lies with tactless critics, only that the current tenor of the conversation isn’t advancing progress.

In a region where museums tend to direct our gaze upon golden ages of the past, the new slavery museum deserves praise for its immediate relevance. Hopefully, the museum will help contextualize the issue for a global audience and help usher in a new phase of openness in a contentious local debate too often locked in a defensive posture.