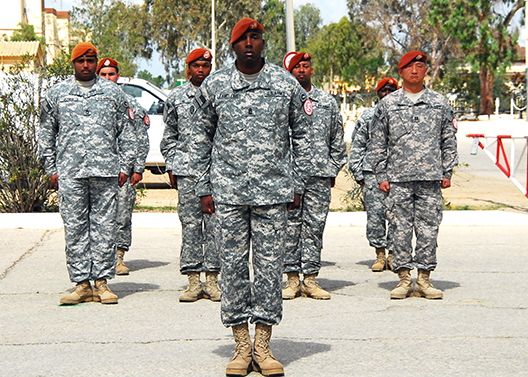 Amid deteriorating security in North Sinai, a Pentagon spokesperson acknowledged on April 12 that the Obama administration is reviewing options to minimize exposure of international peacekeeping forces to a growing threat in the peninsula. Despite unprecedented security relations between Israel and Egypt, both insist on the importance of the Multinational Forces and Observers (MFO); and the United States is adamant that its commitment to the peacekeeping mission “has never been stronger.” However, irrespective of the Obama administration review, the MFO footprint in North Sinai is changing.

Pentagon Spokesman Navy Captain Jeff Davis outlined the US review: “What we want to be able to do is look at the core things that that mission provides and see how we can leverage modern technologies, remote surveillance capabilities, etc., to be able to carry out that mission.”

The MFO’s mission is to monitor and report on Egyptian and Israeli security activities in the border region, as part of its role in ensuring Egyptian and Israeli adherence to the 1979 Peace Treaty. This monitoring is conducted by 24 US civilian observers, and the primary role of the 1,700 US and international troops in the MFO, half of which come from the United State, is protecting those observers. Replacing some manned operations with—for example—stationary cameras, drones, remote-controlled vehicles, or satellites would decrease force deployments to protect current manned observation activities.

Citing anonymous officials, Reuters notes the discussed changes “could eventually allow the United States to withdraw hundreds” of troops. However, a majority of US forces—and most of those that could be removed by remote monitoring—are already based in South Sinai: at the MFO’s South Camp in Sharm al-Sheikh and at eleven checkpoints and observation posts.

Of course, internal administration discussions do not always result in policy changes; and in the case of the MFO, any major US adaptation requires Egyptian and Israeli acquiescence. In 2002, then-Secretary of Defense Donald Rumsfeld wanted to reduce US presence in Sinai to a couple dozen. Following a summer 2015 review, rumored to be considering US withdrawal, the United States ended up sending an additional 75 soldiers to bolster North Camp security.

Meanwhile, the MFO already recognizes the risk of both collateral damage and direct attack at its isolated North Camp base in al-Gorah and in North Sinai generally. Despite Israeli protests, in his November 2015 annual report MFO Director General David Satterfield for the first time publicly acknowledged that the MFO is moving its nonessential operations out of North Sinai:

We decided to rebalance administrative and logistics functions for the Force between North Camp and South Camp. While North Camp has historically functioned as our main camp, the changed security situation in its vicinity led us to rethink how we do business…. the end result will reduce the population at North Camp to that only necessary for supporting continued operations in the northeast Sinai. The central purpose of this move is the reduction of risk: risk to our personnel on North Camp from attack or indirect fire, risk to logistics movements to and from the Camp, and risk to assets on the Camp.

The MFO now operates in different physical and diplomatic environments than when the force first deployed in 1982. The organization, and its contributing states, wants to adapt in recognition of both better Egyptian-Israeli relations and worse security conditions.

The MFO’s main mission remains verifying the Peace Treaty obligations, and additional agreements, of Egypt and Israel. The mechanism was designed when trust between the parties was low. Today, Egyptian and Israeli security leaders communicate regularly and directly. The Israeli government, equally concerned about jihadists in North Sinai, approves every Egyptian request in excess of the Treaty limitations. Since 2011, the Israeli government has approved Egyptian military forces with tanks, fighter jets, drones, armed single-engine planes, and heavy weaponry deployed near the border.

The positive developments in bilateral security ties resulted from the downturn in North Sinai security. Salafi jihadist activity in the peninsula prior to January 2011—most notably the resort bombings of 2004-2006—grew exponentially with the chaos that followed former President Hosni Mubarak’s ouster and the emergence of Ansar Bayt al-Maqdis (ABM), which formed in North Sinai to attack Israel and disrupt Egyptian-Israeli ties. In July 2013, following the removal of former President Mohamed Morsi, ABM focused attacks on the Egyptian state. In November 2014 the group formally pledged allegiance to ISIS, changing its name to Sinai State.

This threat environment concerns the MFO for two reasons. First, the MFO’s North Camp is located in the Sinai State’s effective “base of operations,” in the northeastern corner of the peninsula. To help explain its current operating environment, one MFO informational video geo-located major militant attacks in 2014 and displayed their proximity to its al-Gorah base. Second, the increased Egyptian deployments to counter the Sinai State require monitoring by US civilian observers in this volatile area.

In addition to security threats, this proximity has presented other operational challenges. Since 2012, North Camp has experienced periods of water and fuel shortages, and a near-total cut-off of internet access and mobile and landline phones during persistent Egyptian military operations. The situation is even worse for remote checkpoints and outposts, some of which had to be closed because they were logistically difficult to supply.

Historically, the marginalized Sinai Bedouins have protested outside North Camp and other MFO sites to pressure the Egyptian government on political grievances—demanding the release of security detainees or dropping in absentia verdicts against family members. Such incidents continued after 2011, but from 2012 the MFO observed a change in the makeup of these “protestors,” who now carried heavy weapons. On September 14, 2012, according to the MFO’s formal account, “a violent crowd … broke through the perimeter defenses and entered the camp.” The armed infiltrators “caused significant damage” and injured eight Colombian troops before fleeing.

Until 2015, the MFO continued to view these dangerous but isolated incidents as a continuation of Bedouin protest politics. With ABM primarily focused on targeting Egyptian security forces with hit-and-run attacks and improvised explosive devices (IEDs), the biggest threat to the MFO was still considered “being in the wrong place at the wrong time.”

Beginning in spring 2015, with the emergence of Sinai State, harassment of the MFO increased: going so far as a jeep of armed militants chasing an Observer unit for miles. On June 9, 2015, Sinai State claimed its first attack on North Camp, announcing on Twitter that militants had fired rockets at the “Crusader force” protecting Israel.

That attack and surrounding propaganda may have been a trial balloon for local tolerance of Sinai State operations against the MFO. In its statement, Sinai State framed the incident as not just an attack on Israeli interests, but also as a Bedouin protest against the recent arrest of a local woman. If so, the balloon sank. Although there have been further attacks on the MFO in North Sinai, Sinai State has claimed none of them.

This could signal tensions between ISIS-minded militants from mainland Egypt, who want to attack the international force; and the leadership of Sinai State, which grew out of the primarily-Bedouin ABM and recognize the importance of the MFO for local interests—especially Bedouin employment. Despite Bedouin interests, the threat to the MFO continues to grow. On September 3, 2015, two Fijian and four US troops were injured by two IEDs on a road near an isolated North Sinai checkpoint. Sinai State’s downing of a Russian passenger plane in October demonstrated the clearest sign yet that ISIS’s Sinai branch would retaliate for operations by the anti-ISIS coalition, in which seven of the MFO’s twelve contributing states are participants.

US forces not abandoning the MFO, or North Sinai

To lower risk to the MFO, the organization began moving duties out of North Camp that are not essential to observer operations. As logistical and administrative jobs move to South Camp, the US and international troops carrying out those roles necessarily will too.

At the same time, an Obama administration review and discussions with the governments of Israel and Egypt may result in some civilians being relieved of their monitoring duties, which would decrease the troop strength necessary to protect those civilian observers. However, as long as US allies Israel and Egypt view an MFO presence as essential, US troops and civilian observers will likely remain in the Sinai’s volatile north.

Zack Gold is a Nonresident Fellow with the Rafik Hariri Center for the Middle East. Follow him on Twitter: @ZLGold

Image: Photo: Troops participate in a Multinational Force and Observers Change of Command ceremony in 2010 (DVIDS)