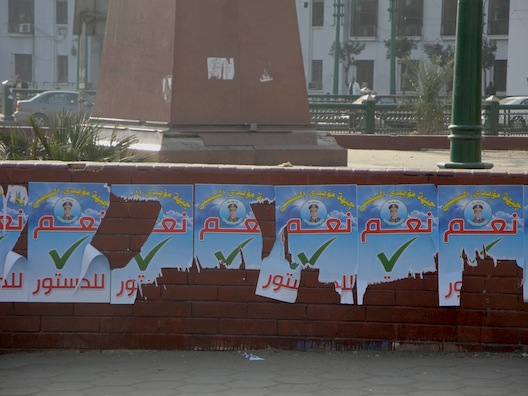 As Egyptians took to the polls for their third constitutional referendum in three years, many observers have questioned the legitimacy and inclusiveness in the repressive context gripping Egypt’s politics today. The atmosphere in Egypt during this period was nothing short of passive intimidation. Soldiers, police, and in some instances intelligence personnel patrolled the polling centers. While it could be argued on one hand that they provided essential security during a rocky transition, such a significant presence accompanied by the prominently displayed “yes” campaign materials could only stand to deter voters who question the validity of the process. Further exacerbated by the severe restrictions on the heterogeneous opposition and the effective shutdown of any public debate, the referendum was essentially upheld as a chance for Egyptians to demonstrate their loyalty to the state, positioning the people at a sort of “with us or against us” juncture. As Democracy International’s (DI) preliminary statement critically noted, the organization “has serious concerns about the political environment in which this referendum took place…against a backdrop of arrests and detention of dissenting voices…This constrained campaign environment made a robust debate on the substance and merits of the constitution impossible.”

Armed and uniformed military personnel stood outside the entrance of the school where the polling took place, watched over in some locations by masked snipers on rooftops. “Welcome to Egypt!” some people called out upon seeing our international observer vests. We walked beneath large banners that read “yes to the constitution,” while loudspeakers blared the state-sanctioned patriotic song that one individual had set as his ringtone. Upon entering the school, another banner read, “The army and the people are one hand.” Voters ululated upon casting their ballots, putting up the two-fingered victory sign that has come to mean support for army chief General Abdel Fattah al-Sisi. “The Families” (neighborhood head honchos) invited us to celebrate with them Egypt’s new independence—an invitation we respectfully declined.

Down the street from the festive atmosphere, one man at a sugar cane stand volunteered, quietly, that he refused to vote because the whole process was a sham. The media reported several clashes, some fatal, and more journalists detained. In Beni Suef, one woman in her mid-twenties was shot dead in clashes between Muslim Brotherhood supporters and security forces. It remains unclear if she was a protester or an innocent bystander. At the polls, however, supporters of ousted president Mohamed Morsi were conspicuously absent—all the more unusual in a place that represented a hub of Muslim Brotherhood activity.

This juxtaposition characterized Egypt’s two-day constitutional referendum on January 14 and 15. As part of Democracy International’s observation mission—the largest international organization to send a team of observers to monitor the controversial referendum—we deployed to twenty-three of the country’s twenty-seven governorates along with more than eighty observers (or “witnesses” in Arabic). Not all felt welcome. In October 6 City, one judge felt no obligation to allow us to witness his polling center’s closing and reopening procedures (further investigation found that officials secured the room in which ballots were stored with a simple lock rather than a wax seal). Some observers experienced significant delays and harassment between the time they presented their accreditation and were let into the polling station, while others were more easily received. Despite reports in the days leading up to the referendum that thousands of local observers would be accredited and deployed throughout the country, few international observers met any. A more oft-cited encounter was with members of the so-called Future of the Nation, who called themselves independently organized youth. They did not possess official badges but roamed freely at certain polling centers within sight of security personnel, ushering in voters—raising questions about their murky affiliations.

Some irregularities included: voters dipping their thumbs into the indelible ink rather than their index fingers as protocol called for; some of the voting booths were not positioned correctly so as to ensure the secrecy of the vote—even though many voters did not seem to care who saw them marking their ballots. In fact, for some it was a point of pride to show they were casting their ballot in support of the constitution. Booths designated for people to vote at polling stations not associated with their registered address appeared the most problematic where hordes of voters submitted to a dubious verification procedure to cast their ballot. Overall, however, observers reported no systematic flagrant technical violations that could have jeopardized the integrity of the vote and none of the individual violations would have a statistically significant effect on the results. The official announcement of the more than 98 percent approval vote and 38.6 percent turnout was more than believable and matched our impressions of the process, but the politics of the referendum never took place inside the polling centers.

The bigger questions related to the inarguably politically repressive climate in which the referendum was held. In and around the polling centers Egyptians were gripped by a festive fever, as if proudly affirming to themselves, and the world, that they have a handle on their country’s democratic transition. Between the music, banners, and ululation, there was a pervasive feeling that the country was celebrating a range of conflated issues: support for Sisi and the military, support for Morsi’s removal, support for the constitution and the implicit rejection of terrorism, with the Muslim Brotherhood having recently been designated a terrorist organization. As the man at the sugar cane stand revealed, however, a large cross-section of the population was never invited to the party. Although the government announced turnout figures higher than the 2012 referendum (figures impossible to verify independently), the tally reveals a significant portion of population opted to stay at home. Unclear, however, is how many abstained from voting as an active boycott or due to a returning sense of apathy pervasive under the Hosni Mubarak regime.

Over the last few weeks, Washington circles debated the ethics of monitoring Egypt’s referendum, with some expressing concern that international observers would legitimize an inherently flawed and unfair process. Some also questioned whether DI, which only had a short-term presence in Egypt, could have the access and experience necessary to identify the process’s irregularities. Such criticisms assumed that DI and the observers who volunteered their time were naïve to the larger political context in which they operated. The unfortunate truth is that other US-based organizations that would normally organize such missions are now illegal and unwelcome in Egypt (National Democratic Institute and International Republican Institute) or elected not to as a matter of principle (Carter Center, which opted to send only a small technical expert team), which ought to be respected. Ultimately, the Egyptian government would conduct the vote with or without international observers. Despite these concerns, an on-the-ground presence allowed a basis from which credible observations could be noted and the concerns of monitors who have spent years studying Egypt’s tumultuous transition could be considered. DI’s commendable preliminary report—arguably the strongest and most constructive language seen to date—will undoubtedly ruffle the Egyptian government’s feathers. Whether the statement will limit the organization’s ability to monitor impending (and more hotly contested) elections remains to be seen.

With the referendum concluded, critical questions remain about how Egypt’s transition will move forward inclusively and transparently. With deteriorating infrastructure and conspicuously large numbers of people unemployed and loitering in their communities, many Egyptians are looking to future elections to bring about a return to stability and economic prosperity. Interim president Adly Mansour did not announce the next election in his official announcement of the referendum results, but most Egyptians with whom we spoke expect a vote for their new president to take place next. Riding the momentum of this past period, this step would be the most logical choice for the Egyptian government to consolidate its hold on power. If General Sisi chooses to run—and there is much to suggest the likelihood of him doing so—the public can expect much of the same atmosphere as with the referendum. Given current attitudes, dissenting voices will not be invited to that party either.

Tarek Radwan is the Associate Director for Research at the Atlantic Council’s Rafik Hariri Center and editor of MENASource.

Lara Talverdian is the Assistant Director for Research at the Atlantic Council’s Rafik Hariri Center.