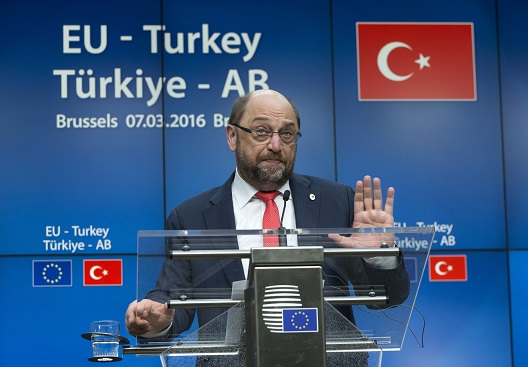 The European Union (EU) and Turkey came to an agreement on migrant travel last week with the components effective as of March 20. What the deal calls “irregular migrants” arriving to Greek islands are refugees who do not qualify or ask for asylum and are to be sent back to Turkey. For every irregular migrant sent back to Turkey, the EU will formally accept one Syrian refugee from Turkey—with an initial 72,000 Syrians by April 4—with full refugee status in Europe. In return, Turkey must work to stop smuggling networks across the Turkish coast. In exchange for stepping up security efforts, Turkey will receive 6 billion euros in aid to deal with Syrian refugees. The EU will also grant visa concessions to Turks traveling to Europe by June and allow the country to join the Schengen passport free zone if it meets 72 conditions (so far only 19 have been met). Finally, the EU will reenergize Turkey’s EU membership bid. From the components listed above, the EU and Turkey position themselves as the primary benefactors of this deal—not the refugees.

The deal claims to deter illegal migration and human smuggling, but instead of tackling these problems, the one-to-one exchange of irregular migrants encourages Turkey to allow refugees to attempt the dangerous trip to Greece. The agreement does not provide the means for Turkey to tackle the 7,200 kilometers of Turkish coastline by April 4, but rather stipulates that, “Turkey will take any necessary measures to prevent new sea or land routes for illegal migration opening from Turkey to the EU, and will cooperate with neighboring states as well as the EU to this effect.” It also ignores the logistical problem of how to send large numbers of people seeking refuge back to Turkey from Greece. The resources used to return migrants and monitor Turkey’s coast could instead be used to process refugee applications faster and more efficiently. As is, Turkey’s interest lies in the continued attempts of migrants to reach the EU through Greece to accelerate the transfer of current refugees from Turkey and encourage the disbursement of EU aid.

Forced deportation of asylum seekers is illegal according to the EU asylum procedure directive and Geneva conventions. European Commission President Jean Claude Juncker, however, has argued that Greece’s recognition of Turkey as a “safe country” allows them to deport migrants there. Yet Turkey refuses to grant refugee status to non-Europeans and has deported Syrians back to Syria in contravention to international law. Syrians have also been assassinated in Turkey and have struggled to get basic residency and work permits. Turkey’s resources for providing housing and food are stretched thin to cover the 2.7 million refugees within its borders. Even the additional 6 billion euros comes to less than 500 euros per refugee. Shuffling people across countries does nothing to ensure their safety or future, but rather puts them in danger and leaves their lives in limbo. Resources in landing points such as Greece and Turkey are not set up with adequate social services. People wait in camps, like the Idomeni camps of Greece with conditions which have been compared to Nazi concentration camps.

Many migrants refuse to apply for asylum because they seek it elsewhere in Europe. Greece is a landing point along the journey, not the destination. Seeking asylum in Greece would require forfeiting rights and services in refugee welcoming countries like Germany. Migrants choose to make the dangerous journey across the Mediterranean to destinations in Western Europe mostly thanks to Austria and the Balkan states having sealed their borders and rejecting Syrian asylum claims. This policy has forced migrants to undertake a risky, costly, and lengthy journey to bypass these blockades. Forcing migrants to apply for asylum when they are already forced to take illegal routes, only reinforces a system set up to return them to Turkey.

The deal seeks to benefit European countries with shrinking economies and political approval ratings, negatively affecting the surge of Syrian migrants. The new policy also affects Iraqi, Afghan, and other potential refugees. While the ongoing brutality of the Syrian conflict rightfully places preference for Syrian asylum seekers, other refugees around the region still maintain the right to seek safe haven.

Overall, this agreement favors the European Union and Turkey more than refugees. Turkey receives financial aid, visa concessions, and consideration of its EU membership bid. The EU, on the other hand, seeks to placate anti-immigration sentiment and mitigate the economic impact across Europe. Turkey does not have an incentive to stop migrants from traveling to Greece. It ensures asylum seekers in Turkey will remain in a country that does not provide residency and work permits, relegating them to the status of second class citizens instead of integrating them into society.

Hossam Abouzhar is the Editor for the SyriaSource blog at the Atlantic Council’s Rafik Hariri Center for the Middle East.

Reema Hibrawi is an intern at the Atlantic Council’s Rafik Hariri Center for the Middle East.

Image: European Parliament President Martin Schulz holds a news conference during a EU-Turkey summit in Brussels, as the bloc is looking to Ankara to help it curb the influx of refugees and migrants flowing into Europe, March 7, 2016. (Reuters)