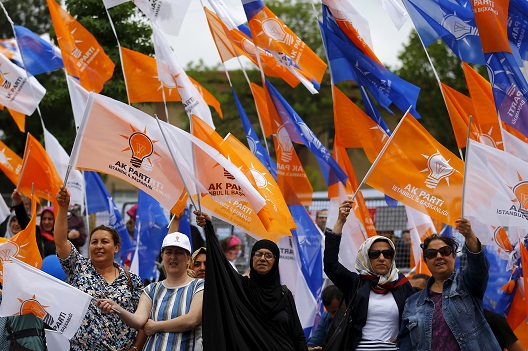 Just days before Turkish citizens head to the poll for the June 7 national election, the ruling Justice and Development Party (AKP) and Turkey’s fourth largest party, the Peoples’ Democratic Party (HDP) are competing for the hearts and minds of religiously minded Kurds. Faced with declining poll numbers and a lack of enthusiasm for Turkish Prime Minister Ahmet Davutoglu, President Recep Tayyip Erdogan has broken with historical and legal precedent and is openly campaigning for the AKP.

Erdogan and the AKP have placed the transition to a presidential political system at the heart of the party’s campaign, arguing that the current parliamentary system is broken and in need of an update. The fate of the presidential system is tied to the HDP’s performance. If the party exceeds the 10 percent threshold, Erdogan and the AKP have no chance of securing more than 330 seats in parliament—the minimum amount needed to pass a self-drafted constitution on to a national referendum.

The HDP’s poll numbers have showed that the party has nearly 10 percent support nationally, which would put the party at the precipice of the electoral threshold. If the party fails, the votes cast for the HDP would be reallocated, with the AKP (the only other party that wins a large number of votes in Kurdish areas) being the primary beneficiary.

To get over the hump, the HDP needs the support of pious Kurds, who have traditionally voted for the AKP. Reports suggest the HDP has had some success coopting some former AKP-affiliated Kurdish voters, but the HDP’s links to the Kurdish nationalist Kurdistan Workers’ Party (PKK) remains a key vulnerability that the AKP has sought to exploit.

In pro-AKP media outlets, the HDP’s leader, Selahattin Demirtas, has been accused of eating pork. Erdogan, by contrast, has proudly displayed a Kurdish translation of the Quran as proof of the AKP’s commitment to represent conservative Kurdish voters. The messaging is blunt: Erdogan and the AKP are the real Muslims, while Demirtas and the HDP are sinful and impious, if even Muslim.

To counteract these attacks, the HDP has run a multipronged campaign tailored to the different voting blocs. In the Kurdish majority southeast, the HDP strikes a more Kurdish nationalist tinge, with supporters openly brandishing the flag of PKK leader Abdullah Ocalan at most rallies. In a nod to religious Kurds, Demirtas points out that his sister wears a headscarf, facing discrimination before the AKP spearheaded legal changes to allow pious women to attend public universities and work in governmental offices.

To reach out to wary Turkish fence sitters enticed by the HDP’s liberal platform, but nevertheless wary of the party’s link to the nationalist PKK, Demirtas has sought to portray himself as the “every man’s Turk.” He has done so by playing the Saz and singing well-known folks songs. This political pageantry is matched only by Erdogan himself, whose donning of an ugly checkered jacket appears to have been a carefully considered political ploy to portray himself as a simple shopkeeper, typical of Turkey’s poorer urban neighborhoods.

This contrast points to a larger issue: The HDP is targeting urban affluent Turks, while the AKP’s base remains in poorer districts that have benefitted from the growth in the economy since Erdogan took power in 2002. This battle parallels the nasty fight to win over religiously minded Kurds.

The unexpected performance of Turkey’s main opposition, the Republican People’s Party (CHP), has aided the HDP’s campaign. Although the CHP’s poll numbers have remained flat (at about 25 percent), the party’s focused economic message has put the AKP on the defensive. After years of campaigning on the strength of the economy, the recent down turn and currency depreciation have opened the door for the CHP to put forward a rival economic platform. The CHP has focused on growing income inequality and promised minimum wage increases; a proposal the AKP has dismissed as populist and financially irresponsible.

This debate has since devolved into a fight over Erdogan’s support for Turkey’s top Islamic cleric, Mehmet Gormez. In recent months, the opposition parties have pointed to Gormez’s use of a 1 million Turkish Lira S-500 Mercedes as evidence of the AKP’s lavish expenditures. The imagery builds upon the recent corruption allegations and the building of Ak Saray, a large presidential compound that reportedly cost hundreds of millions of dollars to construct. The AKP has struggled to respond to the Mercedes controversy, with Finance Minister Mehmet Simsek describing the total expenditure on government automobiles as “peanuts.” Gormez has sought to stay out of the controversy and tried to give the car back, which prompted Erdogan to exclaim that he would purchase Diyanet (the government directorate of religious affairs) another Mercedes and provide Turkey’s top cleric with a private plane.

The HDP has also made mistakes. In an effort to win Alevi voters, who traditionally vote for the CHP, the party has promised to close the Diyanet. In May, Demirtas compared Taksim square to the Kaaba in Mecca, saying, “Muslims visit the Kaaba for pilgrimage while Jews travel to Jerusalem. You cannot perform [the pilgrimage] elsewhere. For the workers, Taksim Square is an equally irreplaceable location.” Equating Jerusalem with Israel and not as a holy Islamic site was used against him in a series of withering AKP-led attacks designed to cast further doubts on Demirtas’ piety.

With just days to go before the election, Turkish law forbids publishing opinion polls in newspapers and the race is still too close to call. Reports indicate that up to 10 percent of the electorate remains undecided. The current polling data suggests that the AKP will receive about 42 percent of the vote, with the HDP narrowly breaking the threshold. However, opinion polls in Turkey rarely publish the margin of error, which raises a number of questions about their accuracy.

If the AKP over-performs and the HDP fails to pass the threshold, Erdogan has a real chance of gaining more than 330 seats in the parliament. By contrast, if the AKP wins 42 percent and the HDP breaks the threshold, the party could only win 280 seats. This outcome would allow the AKP to form a government, but would require that the party reach consensus with the opposition parties on its constitution.

In recent days, pro-AKP columnists have sought to temper expectations, writing that such an outcome would be akin to the status quo. The AKP currently has 312 seats in parliament and its efforts to reach a parliamentary consensus on a new constitution have thus far failed. Turkey’s political future remains murky and any number of scenarios could play out between today and June 7. The race remains tight, ensuring that the AKP and HDP will continue to battle in the days leading up to the election.