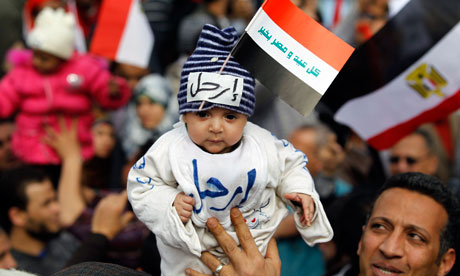 Everyone knows that the January uprising was heavily driven by youth, but one demographic group that has been almost entirely overlooked in analysis of the transition is Egypt’s youngest generation, the children of the revolution.  The last twelve months have been a transformative, inspiring and at times traumatic experience for Egyptian children, who will inherit the political and economic turmoil of a transition that is bound to continue for years.

Understanding how children are being affected by conditions of political instability and occasional outbreaks of violence is essential to forecasting how this generation will develop and interact with the political process in years to come. Before the revolution, civic and political engagement for children was extremely limited. Mubarak’s photo was a ubiquitous fixture on the walls of classrooms and in history lessons, and children were taught to respect and not question their government. Even though many didn’t agree with Mubarak’s policies, most of their parents were very reluctant to expose their children to political debates. Few young people were given the opportunity to engage in political activism, and in the few cases where children experienced high levels of political consciousness, it was usually due to a family member’s confrontation with the security apparatus. On the rare occasions when children were allowed to participate in public debates or given a media platform, they were only allowed to comment on a narrow spectrum of social issues, as was the case with  Suzanne Mubarak’s "Reading For All" campaigns.

The January uprising was as much a political awakening for children as it was for all Egyptians. In the early days of the uprising, parents were eager to expose their children to the protests making history. Initially, they may have watched the demonstrations unfold on television from a safe distance, but after the initial 18 days, when conditions were relatively safer, children could be seen participating in the marches themselves. By March, children were chanting and even leading rallies themselves. Impoverished and underprivileged children were at the forefront of political activism, seizing the opportunity to demand a better future.  Children barred from participating in street protests by their parents became increasingly outspoken at school, channeling their newfound political awareness into campaigns against certain school policies or even cafeteria prices. This phenomenon was manifest at all levels of the educational system – particularly among university students – and the calls for a nationwide civil disobedience campaign in February had the most impact on university campuses. But all this youth activism has been deeply unsettling to Egyptian officials, who view this newly politicized generation as a threat to the status quo. Prime Minister Ganzouri denied that  a 12-years old could be a revolutionary and the Minister of Education issued a decision barring students  from participating in any political activity.

Examining the revolution’s impact on children and the revolution raises some concerns for their safety and wellbeing. While exposing children to different perspectives and political debates marks an important stage in their psychological and social development, the downside is that children are now at risk for over-exposure to television and (potential exploitation by the media.) While  allowing children to air their opinions in media interviews adds important diversity to public debates and promotes dialogue between different generations, excessive contact with the media could also lead young people to assimilate unhealthy values, such as an obsession with fame and egoism. Last month, a group of children appeared on a popular prime time show hosted Yousri Fouda, where they shared their opinions on the revolution. Some claimed on their Twitter accounts that they had received death threats from the Mubarak’s Sons movement. Political engagement brings risks, and parents must find a healthy balance between allowing their children to develop as opinionated and politically conscious citizens, and putting them at risk for exploitation on the internet by letting them grow up too soon.

Ultimately, the future of Egypt’s transition will be defined by its children. The roots of democracy will emerge from the generation whose earliest memories were shaped by the revolution. While their parents’ generation was molded by authoritarianism – and therefore will always find it more difficult to envision a democratic alternative – Egypt’s children possess the psychological clean slate needed to build a more open and democratic society.