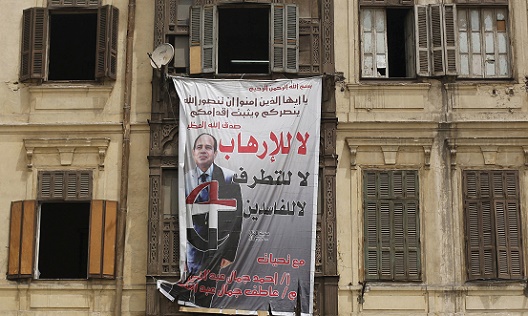 A banner with an image of Egyptian President Abdel Fattah al-Sisi is hung from an old house in the old Islamic area of Cairo, April 20, 2015. The banner reads "No to terrorism, no to extremism, no to the corrupt." (Reuters)

Cairo University professor and prominent researcher Mostafa Kamel al-Sayed has actively worked for many years toward a modern, democratic and just state in Egypt. Under ousted-President Hosni Mubarak, he was a key member of both the Kefaya (or Enough) Movement and the National Association for Change. Many observers consider these groups the trigger for a growing movement that finally led to the January 25, 2011 uprising against Mubarak’s 30-year rule and the end of a hereditary succession of power. Al-Sayed spoke to EgyptSource on his assessment of President Abdel-Fatah Sisi’s first year in office.

What is the most significant mark of President Sisi’s first year in office?

Al-Sayed:  Sisi’s main mark is his total reliance on the institution of the army. This dependence probably has to do with his upbringing—the fact that he joined the army since high school at the age of fifteen was socialized within it. Sisi grew up in circumstances dominated by single-party rule, without an active political life, or strong political movements. His predecessors, also army officers like late Presidents Gamal Abdel Nasser, Anwar Sadat, and ousted-President Hosni Mubarak, appointed civilians in key ministries and trusted them. In contrast, President Sisi seems mostly to trust military people. All his close advisors at the presidency are army officers. I think this will continue to mark his rule over the coming years.

During his election campaign, President Sisi said he would not announce a detailed program. Yet, he made some big promises that would take years to be achieved. In this context, is it fair to assess Sisi’s performance after only one year?

Al-Sayed: The most important promise Sisi made was that he was committed to the roadmap [announced on July 8, 2013, five days after then-Defense Minister Sisi forcibly removed former-President and Muslim Brotherhood leader Mohamed Morsi on July 3, 2013.] This included the promise to hold parliamentary elections within six months after the adoption of the constitution [in January 2014]. Sisi then repeated the same promise when he delivered his speech in front of the UN General Assembly in New York in September, 2014, saying elections would be held before the end of that year. None of these deadlines were met. Now, the president says he would hold elections before the end of 2015. I think this is very important, because it reflects Sisi’s views on the importance of parliament. Sisi expects the country to be united behind the leadership, like all army officers and soldiers should be united behind their commander-in-chief. However, politics, in reality, means tolerating differences, disputes, and debates. This view of politics is not in the mind of President Sisi. I do not think he feels comfortable with the presence of an elected assembly because such an elected body would mean debates, different points of view, and disputes. The president wants to continue to rule the country in the way he ran the Armed Forces before he took his new position.

President Sisi enjoyed widespread public support upon his election—a public that hoped that his background as a military man would help restore security. Has security improved one year after Sisi?

Al-Sayed: Definitely, it has improved. We no longer see the massive demonstrations by Brotherhood supporters that followed Morsi’s removal. There are still demonstrations by the Brotherhood, but they are mainly in provinces outside Cairo. Even there, they do not attract as many people as before. Personal security has also improved. There was a period during which people did not feel safe to go out in fear of attacks by organized criminal groups. This is not the case now. However, we still have highly organized terrorist attacks, particularly in Sinai, by groups like Ansar Bayt al-Maqdis. We also have other attacks that are carried out, I guess, by Brotherhood sympathizers such as bombing electricity towers, public transportation, and targeting police and army officers and soldiers. But the second type of attacks is not felt widely by the people because they are sporadic and local. Thus, security has improved, but definitely not 100 percent.

Do you believe that Egyptians sympathize with official rhetoric that despite all our problems, we remain much better than Syria, Iraq, Libya, and Yemen?

Al-Sayed: When I look at the figures released by polling centers, such as Baseera, it seems that the rate of approval for the president does not change, and he continues to enjoy high ratings close to 80 percent. One reason why the president continues to maintain this popularity is that the people compare the situation in Egypt to that of other countries in the region. They also see President Sisi as distinct from the government. So, if people are suffering any problems such as increasing prices or deteriorating services, the blame goes to Prime Minister Ibrahim Mahlab’s cabinet—not the president.

As much as people expected security to improve under Sisi, they also hoped the economy and living conditions would improve. How much improvement we have seen on that front?

Al-Sayed: I’m afraid not much. In fact, most people feel their economic situation and living conditions are deteriorating because of inflation. This is an acute feeling among the people, but is not reflected in official statistics, which estimate that Egypt’s GDP will grow at the rate of 4.2 percent. Mubarak had the same problem: people do not feel the impact of the improvement reported in official figures. Even though the government continues pointing to macroeconomic indicators, we cannot deny there are also serious concerns on that front. The budget deficit, balance of payment, and the drop in foreign currency reserves have all reached critical levels. We were only saved by the deposits provided by Arab Gulf countries in the Central Bank. I think President Sisi is aware of this, but he continues to ask people to be patient and wait for two or three years until they see improvement.

During Mubarak’s last years in office, a small number of tycoon businessmen, led by his son Gamal, were practically in control of the economy. Is this the same situation now?

Al-Sayed: I think the main difference now is that it is not clear how much the private sector in Egypt has regained its trust in the government. There seems to be a problem between the private sector and President Sisi and the president himself has publicly expressed this. Newspapers supportive of the president also blame the businessmen for not being forthcoming in responding to Sisi’s call to contribute money into the Long Live Egypt Fund he created. So, clearly there is a problem. There is also the perception that President Sisi prefers to rely on the armed forces to carry out megaprojects. I’m not just talking about the widening of the Suez Canal project, but also with the development of the Suez Canal region and the project to build 1 million housing units, financed by the United Arab Emirates. This favoritism has sparked negative feelings on the part of the private sector and businessmen are not as close to President Sisi as they were to Mubarak and his son.

How do you assess President Sisi’s record in terms of political and basic freedoms?

Al-Sayed: I think is one of the areas where people’s expectations were not met. Definitely, Hosni Mubarak tolerated more diverse views in the Egyptian media than now. We rarely find articles in Egyptian newspapers that are critical of President Sisi and there is little diversity in the talk shows on Egyptian TV channels. The presence of people affiliated with military on talk shows is also a new phenomenon that we did not see under Mubarak. There are also specific cases in which particular talk shows stopped because they were critical of Sisi. So, definitely, space is shrinking for free debate, freedom of association for NGOs and human rights groups, and freedom of assembly to protest peacefully.

President Sisi admitted that innocent youth were held in prison under the Protest Law and that they should be released. Why do you think this never happened?

Al-Sayed: I think he gets reports from security sources that those people are troublemakers and should remain in prison, lest they continue their protests. I think the president does not believe that freedom of assembly in the form of demonstrations should be tolerated in Egypt at present. This is his conviction. He believes the Egyptian people are not yet ready to practice democracy. This is what he said in one of his interviews during his election campaign: that Egypt needs twenty-five to thirty years to have the kind of democracy that exists in Western countries. He also believes in the notion that human rights are not only about civil and political rights, but also about social and economic rights. My only comment is that economic and social rights are not guaranteed in Egypt. So, it’s not that we have traded civil and political rights to gain economic and social rights. We do not have any of these rights.

So could we expect more of the same during Sisi’s second year or are there prospects for change based on lessons learned in the first year?

Al-Sayed: I am afraid I do not see any sign that things are going to change. Even if we have parliament elections, the kind of electoral law we have will not open the way for an active assembly with a diversity of views. It will be controlled by independent candidates who run for membership in the Assembly to gain prestige or to benefit from being close to the government. Meanwhile, political parties will be a minority. So, I think we are going to see more of the same in the second year of President Sisi.