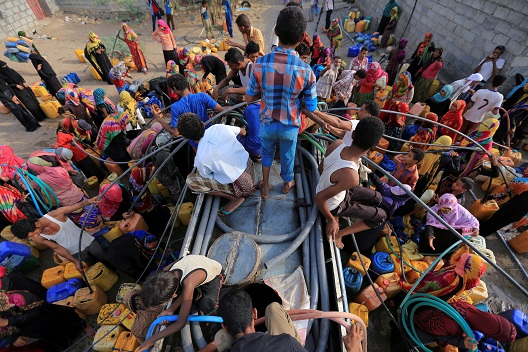 Water scarcity may not be the most apparent driver of conflict, yet in Syria and Yemen, the water crisis is an important factor that continues to impact both countries. While the violence and political turmoil in these countries may seem more pressing, the conflicts themselves are linked with water shortages, and exacerbated by this underlying issue. The control, provision, and weaponization of water further enflames tribal and regional divides. Water scarcity, though, also offers a chance for cooperation between different groups, and provision of clean water is a path towards political legitimacy.

Water scarcity and control is not the focus of media, but the impacts of both are clearly felt throughout the conflict. A severe drought, which took hold across the Levant region in 2006, divides resource conflict experts, some of whom do not identify the water crisis as the sole or a major cause of Syria’s war. Yet understanding water scarcity’s role in the socioeconomic changes, internal displacement, and economic crisis that led up to the Arab Spring protests of 2011 is complex. Decreases in food production and increases in grain prices were important contributing factors of the 2011 protests that preceded the current conflicts. While six major droughts from 1990 to 2005 have impacted Syria, these droughts lasted one or two seasons. The drought that began in 2006 was the first to become multi-seasonal lasting into 2011. During this drought, rainfall in most parts of the country fell below eight inches per year, the minimum needed to sustain un-irrigated farming.

Migration was an especially disruptive causal factor, as many farmers and herders were forced to move to cities following the 2006 drought in search of alternative work, along with 1.5 million recent Iraqi refugees displaced due to the Iraq war. Between 2006 and 2009, agriculture failures affected approximately 1.3 million inhabitants of eastern Syria, and more than 1.5 million people—mostly farmers and agricultural workers—moved from rural to urban areas, settling on the outskirts of major cities, including Aleppo, Damascus, Daraa, Deir Ezzor, Hama, and Homs. Yet in the cities, few found any opportunities. Before the drought and onset of war, Syria’s Gross Domestic Product (GDP) was approximately $5,000 per capita. Yet by 2010, GDP per capita had fallen to about $2,900, according to UN data. While water scarcity alone may not have caused the current conflict, the increase in urbanization and unemployment exacerbated socioeconomic tensions. Therefore, water is a subtle driver of the early clashes between the regime and the Syrian people.

Since the conflict began, different groups weaponized water. In November 2012, rebel fighters overran government forces and captured the Tishrin hydroelectric dam on the Euphrates River. Controlling the dam, a major source of electricity for several areas in Syria, was a strategic victory for rebel forces. In December 2016, the Syrian government targeted the Ein el-Fijeh water facility of Wadi Barada and cut off the water supply to Damascus, leading to internal displacement. Some reports claim that prior to being cut off, the Syrian government contaminated the water supply with diesel fuel. In March 2017, the United Nations formally accused the Syrian government of deliberately bombing water facilities, in what it called a war crime.

Withholding water is used as a tactic of war across the country, primarily by the Syrian regime, but also by some opposition and extremist groups. The Islamic State (ISIS, ISIL, Daesh) shut down a major water channel from the Taqba Dam to Aleppo, which the Syrian government took control of in December 2016. ISIS also leveraged water as a funding mechanism by levying taxes. In Raqqa, ISIS converted the Credit Bank into the tax authority that collects payments from businesses and individuals for electricity, water, and security.

Already a scarce commodity, the impacts of climate change and perpetual war are depleting the water supply in Yemen at an accelerated pace. Prior to the current conflict, Yemen’s population underwent a sharp demographic shift from rural, coastal areas to urban centers. At the same time, Yemen’s population growth rapidly increased from around eight million in 1980 to currently twenty-seven million people, straining its already fragile water reserves. Yemen’s economy also witnessed a shift from sustainable sustenance farming to cash crop harvesting, which required even greater amounts of water to sustain.

As the amount of water withdrawn from wells reached unsustainable levels, water became more scarce and prices rose; it became unaffordable for most of the poverty-stricken population. In 2015, experts estimated that thirteen million Yemenis, or 50 percent of the population, struggle daily to have enough clean water for basic necessities. This crisis, while not at the forefront of most tribal disputes, has exacerbated tribal conflicts and increased the urban-rural divide, with instances of escalating violence over the control and routing of water in areas such as Taizz and Abyan.

The impact of water scarcity is important but often lost in the details of the larger conflict. In one case, a woman and her family from Taizz fled the conflict there to stay with relatives in a neighboring village. However, the families fought over water distribution. The stress and tension led the woman and her family to risk going back to the epicenter of conflict in Taizz, rather than continue to fight constantly with family members, despite the city being under constant shelling.

Control over limited water resources is consistently a strategic tactic employed by both sides throughout the current conflict. Both the Houthi and Saudi forces have reportedly blocked deliveries of humanitarian aid including food and water to use against the other side. In February 2016, reports indicated that Saudi planes bombed and destroyed a reservoir that served as a source of drinking water for thirty thousand people. There have also been reports of guards confiscating water from civilians at Houthi-controlled checkpoints around Taizz.

Water will continue to play a role in the Syria and Yemen conflicts. Controlling the provision of water remains an attractive point of leverage for all parties. However, outside pressure levied by the international community may play an important role in seeking a resolution.

In Syria, the United States and Russia recently agreed to a buffer zone along the Euphrates river, and the United States was able to ensure that Syria’s three main dams were on its side of the buffer zone. This guarantees its position in any reconciliation or reconstruction discussions.

The ability to provide clean water is a path to political legitimacy and can be used by any side in the conflict whether it be regime, opposition, or ISIS. In Syria, the United Nations Children’s Fund (UNICEF) reported  in January 2017 that “about 5.5 million people in Damascus and Rural Damascus and 1.8 million people in Aleppo were deprived from access to safe water due to damage to water supply networks caused by the conflict for long periods.” In areas of Raqqa captured from ISIS, residents are digging their own wells because they cannot easily relocate to areas with clean water. Water in these wells are not treated leading to an increased risk of common water borne diseases like typhoid and cholera spreading to more of the population. In Yemen, the contamination of water has led to the spread of a crippling cholera epidemic, which has infected half a million Yemenis and led to the deaths of an estimated two thousand.

Providing clean water can act as a point of cooperation between conflicting parties. Whereas the humanitarian sector has focused on providing immediate treatment, such as treating water with chlorine in Yemen, providing clean water can act as the basis for local and international agreements. For example, having local parties agree on the allowing water to be treated, a process hindered by constant aerial bombardment in both countries, and then having the international community enforce such agreements, can be a step toward prioritizing citizen safety and cooperation.

The conflicts in Syria and Yemen demonstrate the need for intervention and pressure from the international community to help both countries safeguard their current water supplies and prepare for the future through careful planning and resource management. Just as water scarcity has been a driver of conflict, ensuring its protection and equitable provision can help resolve conflicts and perhaps offer the hope of more stability.

Margaret Suter is an MA graduate from the American University School of International Service International Affairs Program. Her work focuses on international development and civil society in the Middle East and North Africa.Follow her on Twitter @MAminishakib.

Image: Photo: People gather around a charity tanker truck to fill up their jerrycans with drinking water in Bajil of the Red Sea province of Hodeidah, Yemen July 29, 2017. REUTERS/Abduljabbar Zeyad