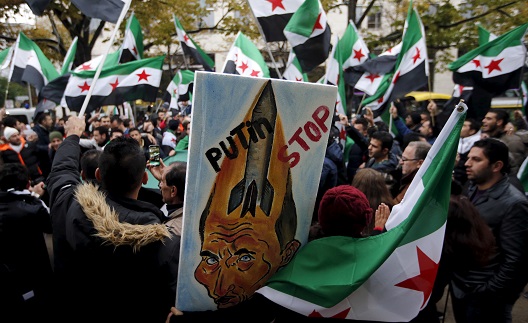 Russian President Vladimir Putin has labeled his entry into the Syrian conflict, following a rapid military buildup in the Latakia region, as a war on terror. Yet Russia’s very first airstrikes in Syria targeted areas where the Islamic State (ISIS or ISIL) had no known presence—regions occupied by the mainstream opposition, which the United States supports. Russia also targeted the positions of Jaysh al-Fatah, the Islamist coalition that includes Salafi groups and the al-Qaeda-affiliated Nusra Front, a coalition that recently made significant gains in the northern eastern regions of Syria and threatened the Alawite bastion of President Bashar Assad. A map of these air strikes shows how Russia’s true war has targeted Syrian President Bashar al-Assad’s opponents, paying little attention to how its bold intervention in Syria could radicalize the Syrian rebels and work as a recruiting tool for ISIS and the Nusra Front.

The Russian Ministry of Defense conducted about 250 combat sorties between October 9 and 12 (according to the Institute for the Study of War) with the majority of Russian airstrikes concentrated in northwestern Hama, Aleppo, and the northern regions. These sorties resulted in a rising death toll, killing about 104 civilians between September 30 and October 12, according to the Syrian Network for Human Rights.

President Vladimir Putin justified his country’s entry into the conflict by saying that Russia was acting “preventatively, to fight and destroy militants and terrorists on the territories that they already occupied, not wait for them to come to our house.

Russia has not made ideological distinction between Jihadists and rebels, labeling all regime opponents as “terrorists.” In a tweet, the chairman of the Russian parliament’s International Affairs Committee Alexei Pushkov, lumped together mainstream rebels with transnational fighters. He argued, “The moderate opposition is largely a myth invented by the United States. Its fighters are not fighting against ISIL, join al-Qaeda, and fired at the Russian embassy. Is that moderation?”

According to General Ahmad Berry, who heads the Free Syrian Army (FSA) general staff, factions could radicalize when such air strikes make no distinction between the moderate opposition and jihadists. “Most of the positions targeted by Russia are on the frontlines with the regime, and held by the FSA and not [ISIS]. In addition, most of the clashes taking place between pro-regime forces on one hand and the FSA and Ahrar al-Sham on the other,” he said in an interview with the Atlantic Council.

The Russian offensive came in the context of the United States abandoning the train-and-equip program, which aimed to train 5,000 carefully vetted Syrian rebel fighters over the next few years. The program succeeded in producing only a handful of fighters who suffered kidnapping and assault at the hands of other factions. Divorced from the reality of on-the-ground dynamics, the program also produced resentment and disgust within the mainstream rebel movement at a Western political gesture that ignored the main source of Syrian suffering: the Assad regime. A Syrian journalist working in rebel areas under the alias Jalal Zein al-Din recently noted that ISIS may have been right when it said that the West was “the enemy of Muslims.”

Military losses, Western isolation, and the framing of the conflict as a religious war continues to exacerbate the sectarian dimension of the conflict that witnessed an another complication last month when the head of Synodal Department for Church and Society, Archpriest Vsevolod Chaplin, described the Russian intervention as “a holy struggle.”

Jihadist figures quickly used Russia’s escalation to reinforce their narrative. An influential Saudi figure residing in Syria, Dr. Abdullah al-Muhaysini (who also heads Du’at al-Jihad Center), called on rebels to fight attempts by the kuffar [apostates, in reference to Russia] to overturn the recent gains of rebel groups. “We will see when the Russians and Muslims confront [them], how heroic will they be.”

Nusra Front commander Abu Mohamad al-Julani delivered a speech afterwards declaring, “The Eastern crusaders … are repeating a dark history by allying with the rufaidiyin [a derogatory term for Shia] and Nusayri [Alawites],” in a manner similar to the invasion of Tartars of Baghdad. The jihadist leader warned that the war in Syria would be worse than in Afghanistan. He said, “[When one] supports God, God makes him victorious” and called on Sunnis to bomb Alawite villages daily.

Fifty-five Saudi Arabian opposition clerics and academics, including some prominent Islamists, have signed a joint online statement, urging “true Muslims” to “give all moral, material, political and military” support to the fight against Assad, Iranian, and Russian forces.

By ramping up its presence in Syria, Putin hopes to achieve what it did in Chechnya where it installed President Roman Kadyrov who cracked down on local insurgency. However, by propping up a regime that has relied on a scorched-earth approach, collective punishment and the support of religious militias from Iran, Iraq, Lebanon, and Afghanistan, Russian intervention will only hasten a rapidly fragmenting Syrian society.

Under the threat of a Russian attack and without adequate Western support (despite reports that the Pentagon will air drop arms and ammunition to the rebels), Syrian opposition factions will likely seek the protection of stronger partners in the fight against the Assad regime and its powerful allies. As news spreads of a growing role for the Iranian Revolutionary Guards (IRCG), so too will the sense of urgency to consolidate rebel forces with the strongest fighting groups.

Acceptable strong partners for these groups fall on the more radical side of the spectrum. More moderates rebels will likely seek to join groups such as Ahrar al-Sham; for Islamists, possibly the Nusra Front. Nearly a month after news of a Russian deployment in Syria circulated, two groups namely Jaysh al-Muhajireen wal-Ansar (comprised of 1,500 Chechen, Uzbek, and Tajik fighters in Syria) and the Tawheed wal-Jihad Brigade (which includes Russian fighters) pledged their allegiance to the Nusra Front.

Protracted Russian airstrikes and the Iranian-backed ground offensive will only weaken the mainstream opposition forces. It will also reverse the relatively moderate stances adopted recently by Salafi groups such as Jaysh al-Islam and Ahrar al-Sham and further radicalize the rebel scene to the benefit of violent jihadist organizations.

A weakened rebel corps will also benefit ISIS in the short term, both on the local and regional level. In Syria, ISIS has captured five villages in a northern offensive, an advance dubbed by the British-based Observatory as the largest since its onslaught against rival rebels in Aleppo in late August. Russia’s attacks on Muslim fighters will also reinforce the ISIS narrative of a war on Islam—the Russians, as stated by Nusra’s Julani, are the same enemy fought by the mujahideen in Afghanistan in the 1980s—triggering a new wave of jihadists intent on “liberating” Syria from this new invasion.

The Russian gamble, which has changed the balance of power in Syria, further complicates the protracted proxy conflict. If it fails to push regional powers to the negotiating table, the prospect of new powerful weapons flowing on both sides of the divide will only spur a more rapid collapse of what remains of Syria.

Image: Demonstrators hold a placard and wave Syrian opposition flags as they protest against Russia's military operation in Syria in front of the Russian embassy in Berlin, Germany, October 17, 2015. (Reuters)