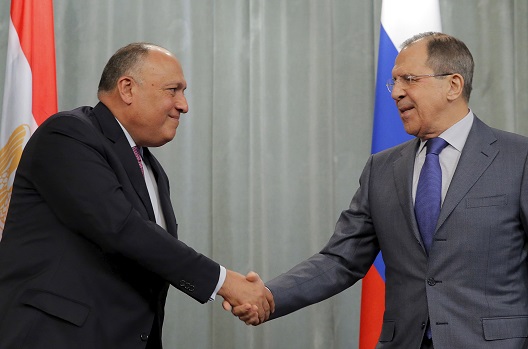 A great deal of media attention to Russian involvement in Libya arose as a result of a March 14 Reuters report that Moscow “appears to have deployed special forces to an airbase in western Egypt near the border with Libya.” These forces, reportedly consisting of a 22-man unit, deployed to support General Khalifa Haftar, who controls much of eastern Libya. Haftar is at odds with the UN-backed (and thus Russian-approved) Libyan government based in the western part of the country headed by Fayez al-Sarraj.

Moscow, as it often does in response to reports about Russian troop deployments, denied that it sent special forces to Libya. Moscow did signal its support for Haftar through several high level discussions, including with Russian foreign minister Lavrov and defense minister Shoigu. All of this fuel speculation about Putin’s potential intentions in Libya. Observers suggested several intentions, including support for a Russian-aligned leader controlling all of Libya; revival (or even expansion) of Qaddafi-era deals for Russian involvement in the Libyan petroleum sector as well as arms sales; the establishment of another Russian naval base in the region; and the prevention of a pro-Western regime from taking power in all of Libya and cooperating with NATO.

Moscow may indeed be pursuing these aims—or may hope to do so if sufficient stability in Libya could be established to enable it to do so. But whatever Moscow hopes to achieve in Libya by supporting Haftar, what is clear is that it is doing this in conjunction with Egypt. Indeed, Russian support for Haftar may have as much to do with Moscow’s ambitions in Egypt as in Libya itself.

Moscow is cultivating its ties with Egyptian President Abdel Fatah al-Sisi and has ever since he overthrew the elected Muslim Brotherhood leader, Mohamed Morsi, in 2013. Egyptian-American relations deteriorated when the Obama administration cut back on US arms supplies to Cairo after this event—Obama saw Sisi reversing progress toward democracy in Egypt, while Sisi saw himself as not appreciated by Washington for rescuing Egypt from an elected Islamist demagogue. When Putin then offered to sell Russian weapons to Egypt, Russian-Egyptian ties improved dramatically.

Yet despite the optics of close ties between Putin and Sisi, Egypt continued to rely primarily on the United States as a security partner. Some in Moscow suspect that Sisi’s turn toward Putin was less about a reorientation of Egyptian foreign policy in a pro-Russian direction, but rather an Egyptian effort to get Washington to be more sympathetic toward Cairo’s concerns. Sisi’s support for Haftar in eastern Libya, though, has provided Moscow with an opportunity to be helpful toward Egypt on something of great importance to Cairo that Obama was unwilling to support Sisi on and Trump has not yet formulated a policy toward.

Cairo, like many others, is concerned about the presence of the Islamic State (ISIS, ISIL, Daesh) and other jihadists in Libya. But Egypt is concerned about stabilizing eastern Libya, right next to its western border. Especially since the UN-backed Libyan government based in Tripoli does not seem capable of ruling even the western part of the country, Sisi sees Haftar as the best hope for maintaining stability in eastern Libya.

Russia joining Sisi in supporting Haftar serves to advance the goals of the Egyptian government in Libya. Nor are Russia and Egypt the only governments to support Haftar; the UAE does too, and so has France. Like Egypt, the UAE and France are also important American allies. On the issue of Haftar, Russia is more aligned with these US allies than the United States itself has been. This is hardly a sign that any, including Egypt, are moving away from Washington and toward Moscow. What it may signal instead is that because these three American allies support Haftar, Washington really cannot object too strongly to Moscow doing so without alienating Egypt and others who are also backing him. And, of course, the Trump administration may even agree with Cairo and Moscow that Haftar is the best bet for keeping the jihadists at bay in eastern Libya.

A question that arises is whether Moscow either could or would support Haftar or pursue a more aggressive Libya policy in ways that Cairo found inimical. There is even precedent for this in Syria where, although Moscow and Tehran both support the Assad regime, Russia and Iran do pursue some opposing goals—Moscow is more willing than Tehran to see Bashar al-Assad depart; Moscow is supportive of the Syrian Kurds while Tehran is not; Tehran and its Shi’a allies are anti-Israeli while Moscow has good relations with the Jewish state. Russia has a much smaller presence in Libya than it does in Syria, making it highly dependent on cooperation from Egypt for pursuing its Libya policy. Not only would Russia risk damaging its overall relations with Egypt, but also its ability to act in Libya by attempting to do so in ways that the Sisi government objected to. Thus, it does not seem likely that Putin will do this.

Another question that arises is what can Russia, Egypt, and any other country hope to achieve through supporting Haftar? The answer to this question is not clear. As weak as the UN-backed government in west Libya is, and as much as Moscow and Cairo would both like to see a reunified Libya ruled by someone sympathetic toward them, Haftar does not seem capable of uniting Libya under his rule. It is possible that Russia could help in the ongoing Egyptian-Tunisian-Algerian attempt to mediate between Libya’s warring parties that oppose not just the jihadists, but one another as well.  But neither Russia nor anyone else has yet been able to do this on Libya. Perhaps the best they can hope to achieve by supporting Haftar is establishing a degree of security in eastern Libya, but even this will take considerable effort. If so, Libya will not be the great geopolitical gain for Russia that many in the West seem to fear.

Mark N. Katz is a professor of government and politics at the George Mason University Schar School of Policy and Government, and a visiting scholar at the Arab Gulf States Institute in Washington.