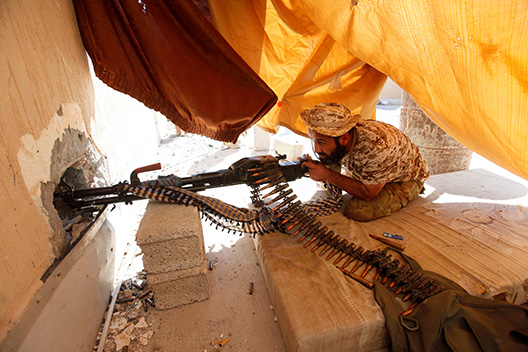 Roughly 20 years ago, Carlo Maria Santoro, a professor of international relations at Milan and one of Italy’s foremost experts on geopolitics, wrote a book titled, The Risk from the South. He warned of Libya’s centrality to the stability of North Africa and the countries of Southern Europe. He was, at the time, referring to the dangerous idiosyncrasies of Libyan ruler Muammar Qaddafi and his shrewd manipulation of the migrant trade, sponsoring of terrorism, and economic blackmail. Today, we are still facing all these threats, even without Qaddafi.

Today the threats from NATO’s south do not come from the politics of a state or a particular leader. They are fragmented and multifaceted, necessitating the need to undertake new strategies. The best way to confront these new threats stemming from widespread instability in the southern borders is to address the underlying factors causing this instability. NATO, which has shifted from focusing on collective defense to collective security, can assume a role in supporting stabilization processes that are supposed to be conducted by other entities, such as the European Union and the United Nations. State-building is necessary to restore stability to Libya and therefore tackle the major threats at the source.

The main risk emanating from Libya is that it may become a hotbed of terrorism. The Islamic State (ISIS or ISIL) is just the tip of the iceberg. Large parts of the country are now fertile ground for the establishment of numerous jihadist organizations, each one with its own international connections. This phenomenon can easily destabilize a country whose importance for security in the region cannot be underestimated: Algeria. With its high unemployment and young population, Algeria—which is undergoing a political crisis and faces economic instability from high unemployment and a young population—is highly vulnerable. In particular, the political situation raises major concerns due to the age and ailing conditions of its president Abdelaziz Bouteflika. The low level jihadi presence in Algeria could receive a boost from the instability in Libya, which could provide training camps, recruitment opportunities, and financial resources by exploiting some of the illegal activities that have boomed there. Tunisia is also deeply affected by Libya’s instability, as are countries like Niger and Egypt that view collaboration between Islamist radicals in eastern Libya and, for example, Sinai-based militants in Egypt as a nightmare scenario.

For Europe, the security risk is theoretical so far since no terrorist attacks in the continent have been linked to Libya in any way. However, this could unfortunately change unless a solution to the Libyan crisis is found.

Another major perceived threat comes from the large flow of migrants leaving the shores of Libya heading to Italy. Migration is primarily a humanitarian issue, but its security dimension should not be underestimated. Libyan gangs and organized criminal networks have become the primary beneficiaries of illegal migration, which is estimated to be worth about $225-325 million per year. Many of the same gangs are smuggling drugs, alcohol, tobacco, and arms throughout the region and Europe. Should these operations fall under the control of jihadist organizations such as ISIS, Ansar Sharia, or al-Qaeda, it would be a powerful boost for their finances and operational capabilities. There is also the threat of the infiltration by terrorists via migration to Europe. While this is certainly a possibility, it has not happened so far. If the power of criminal organizations in Libya is not curtailed, it will soon reach a level whereby these organizations will be able to invest their illicit profits in Europe in search of new rackets, thus further corrupting the public order in these countries.

Libya’s economic crisis could also have security implications for NATO’s south. Libya is home to Africa’s largest proven oil reserves: 48.4 billion barrels. Libya’s oil is cheap to extract, which translates into lucrative profit margins for oil companies operating there. Even after the revolution, Libya maintained an output of 1.7 million barrels a day, accounting for over 10 percent of European oil imports. After the 2014 crisis, this output collapsed, reaching as little as 360,000 barrels a day. Neglect and widespread attacks have hit the oil infrastructure hard. Europe, especially after the Ukrainian crisis, needs to lessen its energy dependence on Moscow. Libya could play an important role to this end. Aside from energy security, the economic crisis facing Libya and a possible economic collapse could cause a humanitarian crisis with millions of people seeking refuge not only from violence but from food and water scarcities. The threat for the southern European countries from this scenario is self-evident.

There are several policies that could be implemented by NATO to address these risks. Closer cooperation with international organizations, in particular the EU, is needed. Although the cooperation between the two organizations has already produced concrete results in the shape of NATO’s activity in the Aegean Sea as well as its support for EUNAVFOR Sophia in Central Mediterranean, these are still “ad hoc” initiatives to stifle migration by sea that do not reflect standing coordination of efforts. Especially when it comes to crisis prevention, where the two organizations could leverage substantial weight by acting together especially in providing training where EU member could capitalize on their expertise in training police and civic society organizations, whereas NATO’s can focus more on training traditional military forces. But so far, they seem to prefer instead to act separately (or, in some cases, to not act at all). In the case of Libya, such close coordination is both unavoidable and desirable and should constitute a long-term project. NATO, which has already expressed its availability to play such a role when a degree of stability and security is guaranteed, should take the lead in supporting the rebuilding of the Libyan Armed Forces and the reintegration of armed militias into the country’s defense and security structures. NATO is no stranger to such a role, having played it in Kosovo and Afghanistan.

On the other hand, the EU should take the lead in rebuilding and reforming police and civil institutions. Some deconflicting may be necessary in areas where respective responsibilities might overlap, such as in the longstanding Libyan project to establish a “National Guard” or in the establishment of border and gendarmerie-like forces. This should take place under a UN “umbrella” although, should direct UN deployment on the ground be lacking, UN legal cover in the form of a Security Council Resolution might suffice to allow implementation by the EU and NATO.

NATO knows and understands the challenge on its Eastern flank, which originates from a state actor that is the successor to the Alliance’s traditional adversary. No such level of understanding and responding has been achieved in the South so far, where the threats originate either from non-State actors (such as ISIS) or are non-military in nature (such as uncontrolled migration). NATO is starting to develop the kernels of a potential strategy based on stabilizing local actors and helping them respond to crises in their own neighborhood, but this has not translated yet into a full-fledged policy. More detailed planning and more resources need to be made available. In the case of Libya, this means that any defense rebuilding and reform should be aimed at identifying the most likely threats to Libya’s security (both external and internal) and train the new Libyan Armed Forces to specifically confront those threats.

Image: A fighter from Libyan forces allied with the U.N.-backed government aims his weapon as he takes a position on a building rooftop during a battle with Islamic State militants in Sirte, Libya September 24, 2016. (Ismail Zitouny/Reuters)