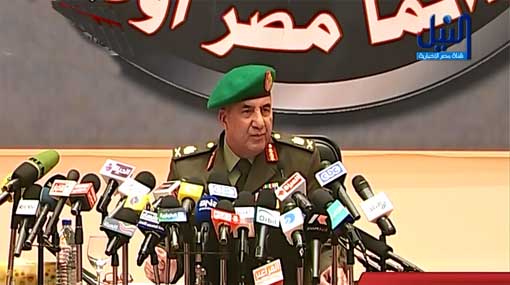 When the Libyan, Syrian and Yemeni armies were repressing the revolts of their people by force, the Egyptian army was boasting that it sided with the people and toppled their leader. However, the latest round of clashes in Cairo, which had resulted in 11 casualties and over 300 injuries by December 19, demonstrate that the armed forces are no longer protecting the people and are now engaged in a lethal campaign to suppress protesters calling for an end to military rule.  The cruelty shown by military forces over the last few days – ruthlessly beating unarmed protesters and stripping them of their clothes — exceeds the brutality of Hosni Mubarak’s former regime.

The shocking images of army officers – wearing regular military uniforms and equipped with anti-riot gear — beating and firing at demonstrators and stripping women in plain public view – is an escalation of the SCAF’s iron-fisted approach to protests, which has been on display for months. This trend became increasingly apparent with the Maspero incidents on October 9, when 28 Coptic protesters were crushed to death by military vehicles and killed by live ammunition. The SCAF’s crackdown escalated again on November 19, when 42 protesters were killed and over 2000 injured – many of them blinded – by rubber bullets in Mohammed Mahmoud Street.

Rather than claim responsibility for its mishandling of the recent violence, the SCAF has consistently blamed the clashes on protesters. In a press conference on December 19, SCAF member Major General Adel Emara claimed that previous incidents in October and November were part of a “systematic plan to bring down Egypt.”   General Emara used the same logic applied by Syrian President Bashar al-Assad, who denied responsibility for the deaths of thousands of Syrian protesters,  and that of former Libyan leader Moammar Qaddafi, who tried to delegitimize protesters by portraying them as foreign agents and mercenaries.  General Emara tried to draw a false distinction between the youth who led the January 25 Revolution and the youth currently clashing with the military, claiming that the later is not representative of the Egyptian people and is motivated by subversive elements and foreign agendas. Once again, the SCAF is determined to portray itself as a victim rather than the perpetrator of violence. Throughout Emara’s press conference, Twitter was buzzing with sarcastic and angry reactions from the youth of the revolution.

Emara’s statements echo the language one might expect to hear from thugs and bullies harassing a weakling.  Protesters are demanding that the SCAF be held accountable for its crimes, but there are few means for legal recourse when the accused perpetrator is running the political system.

All along, the SCAF has been trying to win sympathy by playing the victim card. Despite a huge volume of video footage documenting the crackdown on Twitter and Youtube, the SCAF is selectively using images of the clashes to portray protesters as violent vandals. General Emara pointed to a picture of children throwing bricks and Molotov cocktails at burning government buildings along with confessions of children and adolescents – possibly given under duress – claiming that they were paid to destroy public property. The SCAF is spewing this propaganda as evidence to support its claim that “hidden fingers” and “systematic schemes” are working to undermine the transition.

While General Emara was making his announcement, the Middle East News Agency broadcast statements by an anonymous official source who claimed that “the involvement of former party and parliamentary figures, businessmen, and political activists in the recent incidents in Egypt, including those at the cabinet, could lead to a ‘Syria’ scenario by transforming the power struggle into a clash between the army and the people.”

Some analysts fear that the army’s confrontation with protesters in Tahrir Square could bring about a crisis resembling Syria’s if protesters refuse to except the military’s roadmap and timeline for transition. Others consider the situation in Egypt different from that in Syria because the Egyptian people toppled the president while Assad still clings to power. One of the activists tweeted describing the situation in Egypt:  “The army sacrificed Mubarak to save the regime and killed the revolution.” As the protesters know, the SCAF has been able to retain power because of the military establishment’s vast resources and institutional infrastructure – much like Syria’s – which make regime change extremely difficult.  In Libya, where Qaddafi’s patronage network and constituency was not as broad as in Syria or Egypt, protesters were finally able to unravel the regime.

Even though the army announced a timetable to transfer power to civilians by the end of June 2012, mistrust and apprehension about the SCAF’s true intensions is rising. There Is a growing sense among activists that the SCAF is trying to isolate the political forces by dragging them into violent confrontations and taking advantage of the average citizen’s fatigue with continued protests and insecurity to justify restrictions on expression and the right to protest.  Nearly one year after the revolution, the Egyptian public is becoming increasingly frustrated with continued insecurity and there is widespread concern that the country is on the brink of a dangerous political firestorm and economic crisis.