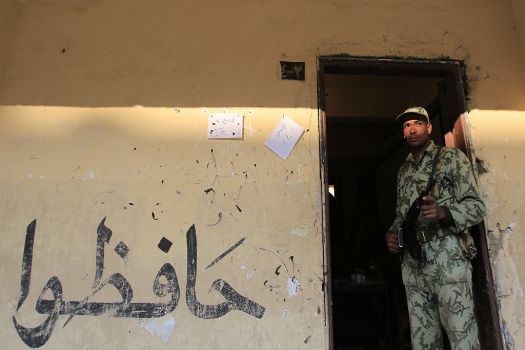 With the ups and downs of unreliable polling data, it is no surprise that observers of Egypt’s landmark presidential election have been fixating on the near-term competition between the presidential candidates. What remains in question is the legal and constitutional framework in which the next president will operate. A bold decision by the Supreme Council of the Armed Forces (SCAF) to issue a “supplementary” constitutional declaration  – initially expected on the first day of the presidential election, May 23 – is raising tensions between the interim military and the civilian authorities over the distribution of power in the future political system.

After Parliament failed in its attempt to form a constituent assembly, the SCAF threatened to issue a supplementary declaration to be appended to the existing interim constitution (also known as the March 30 Declaration) if a new assembly could not be formed by May 20, claiming that such a decree was necessary to clarify the powers of the next president and thus prevent elections from taking place in a constitutional vacuum.

When the deadline expired, the SCAF announced plans to issue a new constitutional decree, reviving fears of military intervention in the legal framework. In a concession to critics who insisted that any declaration be negotiated and agreed upon by all political forces, the SCAF held meetings with representatives of political parties including the Brotherhood’s Freedom and Justice Party.  But two days before the start of polling, the talks were at a standstill, and the SCAF and negotiating parties had no choice but to defer the issue until after the first round of voting, operating under the assumption that the election will go to a run-off round in June.  Although the content of the declaration has not yet been made public, the SCAF is rumored to be seeking the following provisions:

If the expected declaration does not provide a reasonable mechanism for civilian oversight of the military, the backlash will undoubtedly be fierce. Mohammed El-Baradei has already joined the chorus of critics, warning that wide-ranging military powers with no mechanism for accountability would grant the armed forces supreme authority over Egypt.

While reports of special provisions shielding the military from civilian oversight are only speculative for the time being, the bigger concern raised by critics is that the supplementary decree is both unnecessary and potentially unconstitutional.  The presidential candidate Khaled Ali pointed out that Articles 25, 56 and 61 of the March 30 Declaration clearly specify which powers are to be transferred to the newly elected president.  Articles 25 and 56 outline the powers of the SCAF, as Egypt’s interim executive authority, and Article 61 clearly requires that all executive powers be transferred to the next president immediately after the election, a seemingly clear dictate that does not require clarification, Ali said. Challenging the legal basis for the expected decree, moderate Islamist and former Judge Tarek al-Beshry warned that any amendments to the March 30 Declaration would be unconstitutional.

Furthermore, the SCAF’s claim that a new declaration is necessary to prevent the undemocratic scenario of electing a president in the absence of constitutionally defined limits on executive power rings hollow, in the face of counter-arguments pointing out that the interim constitution already defines presidential authorities with sufficient clarity. The SCAF’s portrayal of the expected declaration as a democratic safeguard would be slightly more plausible if the ruling generals did not have such a long track record of interfering with the constitutional process to promote their own interests, starting with the infamous supra-constitutional principles proposed in November 2011.

Critics from across the political spectrum agree on one thing: The SCAF cannot unilaterally issue a decree without the input of political forces. The Islamist presidential candidate Abdel Moneim Aboul Fotouh has even suggested that the decree must be subject to a popular referendum: "No entity has the right to issue or amend articles in the interim constitution without consulting the Egyptian people,” he said. SCAF member Mamdouh Shahin has insisted that the SCAF “does not intend to change [the presidential] powers without consulting other groups,” although he maintained that the SCAF has the right to amend or add articles to the existing constitutional declaration without submitting it to a popular referendum.

The SCAF will likely face intense pressure to subject any draft decree to a parliamentary vote, as members of the People’s Assembly have repeatedly argued since its first session that the elected legislature now holds the exclusive authority to propose new laws. On May 19, liberal MP Wahid Abdul Magid stated that the SCAF has no legal authority to introduce legislation without going through Parliament, and warned that the new decree “will contradict the present constitutional declaration.”

After initially accepting the military’s proposal for a supplementary declaration, Essam al-Arian, Chairman of the Foreign Relations Committee and deputy head of the FJP, joined with the other political forces stating that, not only does the SCAF lack the authority to append the constitutional declaration, but neither does the Parliament. Although political party representatives and presidential candidates have thus far failed to agree on guidelines for the declaration and submit a recommended format to the SCAF, al-Arian suggested that Egypt’s political players could agree on a code of ethics that would include the minimum criteria clarifying the president’s powers without the need for a supplementary declaration.

Al-Arian’s proposal for a binding code of ethics that transcends the legal realm may have merit, as the high level of scrutiny and pressure on both the SCAF and parliamentary majority will raise the political costs of violating a moral agreement. Now that the first round of the election is underway (with no guarantee that the election will go to a second round), the window for tinkering with the interim legal framework has long since closed.

Mara Revkin is the editor of EgyptSource at the Rafik Hariri Center for the Middle East.

Tarek Radwan is Associate Director for Research at the Rafik Hariri Center for the Middle East and a blogger for EgyptSource.