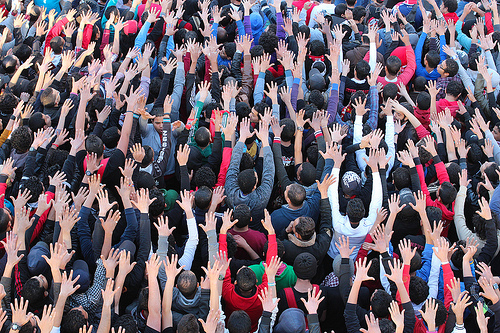 Would-be heroes and villains–and they are legion in Egypt these days–continue to set the social and political stage for violence and senseless civil strife as they marginalize the democratic demand for early presidential elections.

The would-be heroes and villains on the religious right–from the Muslim Brotherhood and the Salafis to organizations with a history of violence–are using accusations of unbelief as a weapon against their opponents who are seeking change and support early presidential elections. In a deadly misrepresentation on their part, the democratic rejection of Mohamed Morsi’s presidency becomes a war against the "Islamic project," a "coup against Sharia," and "sectarian hatred." All this naturally calls for a defense of the elected president to "come to his aid" against "the enemies of Islam" and the forces of "idolatry and secularism," which must be uprooted and excluded from society and politics. It is sheer madness to turn a blind eye to the statements of villains in the ranks of the religious right – not to mention their daily attempts at sectarian provocation.  Likewise, it is naïve to suppose that such behavior will not turn violent and that they are not ready to practice this violence over the long term.

On the other hand, the would-be heroes and villains among the opposition forces–whether affiliated with political parties or not–are removing the demand to put an end to Mohamed Morsi’s failed presidency from its proper democratic context and turning it into a war of extermination and exclusion against the religious right and its popular base. "We’ll send you back to your lairs," "We’ll rid Egypt of you," "The clash on June 30 will be between the people and an organization that stands outside the people," “The people will destroy you," "Either us or you, either we free Egypt from the plague of the Muslim Brotherhood–or death," and so on. These are tyrannical statements that totally blur the line between the legitimate demand for political change to end a failed presidency and promoting wars of extermination and civil strife according to the destructive rule of "war of all against all" (as opposed to the recognition of all by all, which is the essence of democracy). It is sheer madness to think that would-be heroes and villains are not distorting the notion of popular pressure in their approach to June 30. It is also madness to suppose that the villains in the ranks of the opposition forces–who do not understand anything in politics except provocation, shouting, perpetual escalation and inviting the army back into politics–are not increasing the likelihood of violence and counter-violence. No less than the villains of the religious right, they are guilty of dragging the country into civil strife.

As the social and political arenas gear up for violence and madness and villains on all sides engage in escalating shouting matches, it falls to the democratic forces seeking to end Morsi’s failed presidency through early elections to reject the tyranny of both the ruling regime and the opposition and present a clear vision for how to manage the period after June 30. The foundation of this must be: the principle of recognition of all by all and equal rights of all citizens within a framework that enshrines human rights, alternation of power and the rule of law.

It is our responsibility to reject being characterized as infidels just because we are members of the opposition. We must confront extremists on the religious right without getting involved in counter-violence or domination of our own. At the same time, we must not back down from the demand for change through early presidential elections. It is also our responsibility to refuse to exclude the religious right from society and politics. We need to distinguish between this oppressive tendency that leads to violence and imposing the constitutional, legal and political groundwork for democracy. This is the only way to prevent the Muslim Brotherhood from establishing a monopoly over the state, dominating society and undermining the rule of law.

I repudiate villains and their statements that push Egypt closer to violence and insanity. I repudiate the villains on the religious right and those in the opposition, just as I regret the blood that has started to flow again. I still hold fast to the demands for democratic change and early elections without exclusion, and I hope for peaceful protests on June 30.