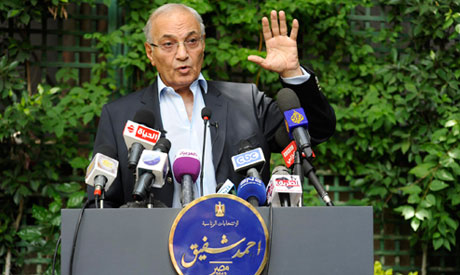 Just hours after the opening of polls on the morning of May 23, presidential candidate and former Prime Minister Ahmed Shafik has already been referred to Egypt’s Prosecutor General over a flagrant violation of the electoral law’s ban on campaigning 48 hours prior to and during the election days. Shafik appears to have crossed the line by holding a campaign press conference at his headquarters in Dokki, where he told reporters that "he is a man with an honourable history."

Shafik began the press conference on a seemingly innocent note, dismissing false reports that he had suffered a stroke or fallen into a coma after sustaining a gunshot wound. Shafik claimed the rumor had been started to spread confusion and anxiety on the eve of the election. But after this initial medical clarification, it became clear that Shafik’s press conference was a full-blown campaign event. Shafik told the audience that he is the one candidate able "to prevent Egypt from descending into a bloodbath" and that "those who scare Egyptians from voting for me want a weak president."

Within minutes, the Supreme Presidential Electoral Commission (SPEC) had referred Shafik to the Prosecutor General’s office, for violating the mandatory campaign silence that began on May 21.
Shafik’s campaign had already come under scrutiny on May 22, after the state-owned newspaper al-Gomhurriya published a full-page advertisement for Shafik paid for by an outside group (the Silent Majority, a group founded to oppose continued protests after the revolution), in violation of the gag order that took effect on the previous day. The fact that the ad was sponsored by independent Shafik supporters unaffiliated with the official campaign raises the question: To what extent will candidates benefit from violations committed by supporters on their behalf, without their knowledge or consent?
Although Shafik’s campaign was not responsible for yesterday’s ad, the press conference this morning was a different story. The SPEC’s swift response seems to be a positive indication of a high level of oversight and enforcement of accountability mechanisms. But Wasat MP Essam Sultan was troubled by the incident, saying that the fact that Shafik so brazenly violated the electoral law in public and on-the-record is evidence of a "deal" between Shafik and the electoral commission.
Despite the high level of scrutiny over Egypt’s first post-Mubarak presidential election, fears of electoral fraud still linger. Leading Brotherhood members contend that Shafik could only win if the election is rigged, casting an ominous cloud over the former prime minister’s campaign. However, it’s hard to believe that Shafik’s referall to the Prosecutor General could be part of a master conspiracy. Whether or not he is ultimately disqualified over the violation, an embarrassing slap-on-the-wrist from the SPEC would probably be enough to discredit Shafik’s campaign beyond repair.
Mara Revkin is the editor of EgyptSource at the Rafik Hariri Center for the Middle East.
Photo Credit: Ahram