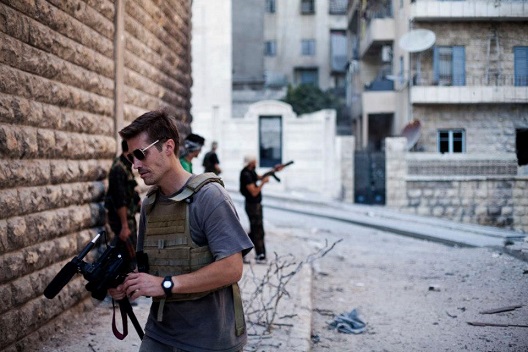 Hashtag activism rarely serves a purpose. It is easy to sit in the comfort of a quiet home, thousands of miles away from any real conflict, and click a link, or share a thought, and be left with the sensation that something has been accomplished. In reality, more often than not, nothing has been accomplished. Just ask Joseph Kony. This week, a social media campaign emerged on the heels of the brutal murder of American photojournalist James Foley in Syria by extremists belonging to the Islamic State of Syria and al-Sham (ISIS). ISIS-affiliated YouTube accounts posted a video of the photojournalist’s grizzly decapitation, which was quickly shared on social media accounts and by some mainstream media outlets. This was despite efforts by YouTube and Twitter to ensure the opposite. In response came the suggestion of an #ISISMediaBlackout: a conscious decision not to share any of the gory images or videos uploaded by ISIS’ members and supporters. In the three days since Foley’s death, the hashtag has been used more than 17,000 times.

Social media has offered a rare chance to interact with a group of people who would otherwise label most Twitter users infidels. Faysal Itani, a Resident Fellow at the Hariri Center, follows and interacts with ISIS members on Twitter and the Syria analyst sees merit in the ability to do so. “Although the material is often offensive and distasteful to us, our research benefits from the sheer aggression of the group’s social media outreach and communications,” Itani explains. Without it, he says, “Our understanding as analysts and researchers on ISIS would rely on speculation and abstraction, rendering it useless if not dangerous to policy and opinion-makers. Our ability to grasp its appeal to recruits, its goals, its worldview and, ultimately, its strengths and weaknesses, would therefore suffer immensely.”

In an article for Foreign Policy, Alex Horton writes about a conversation with Abdullah, an ISIS supporter from Europe, sparked by an unexpected but mutual admiration for the late American actor, Robin Williams. Abdullah’s account has since been suspended, in what was likely a sweeping campaign by Twitter to stop ISIS from spreading the gruesome video of Foley’s murder.

While Abdullah amounts to little more than an ISIS fan boy, other accounts on Twitter run by ISIS fighters based in Syria have also been suspended. Islam Yaken, an Egyptian law school graduate, is one such example. Yaken’s Twitter account went from sharing bodybuilding tips to providing disturbing insight into the life of a middle-class Egyptian man who had gone from the streets of Cairo to the war-torn rubble of Syria. After two years fighting alongside ISIS, decapitations and disturbing killings became a mainstay of his Twitter feed as he did his part to spread the terror group’s propaganda.

Some argue that ISIS’ PR campaign has contributed to its recruitment strategy, particularly when calling on Muslims in the West, like Abdullah, to join the fight. Itani disagrees: “I am confident that broadcasting its atrocities costs ISIS more supporters or would-be supporters than it provides. On the balance, let the group show the world what it is and represents. If Muslims are to decide how to react to ISIS, surely they should do based on the realities of the organization, and not on ignorance.”

Itani’s point that there is danger in completely shutting out all ISIS-related media is well taken. However, that very same social media strategy that ISIS has adopted has likely led to disturbed and marginalized individuals contributing to its numbers. Facebook and Twitter have been employed to recruit ISIS members from everywhere from India to Australia. In June, the Syrian Observatory for Human Rights estimated ISIS’ new recruits at 9,000, a third of whom are believed to be foreign fighters.

The group has been so deft at its social media strategy, it has succeeded in inserting itself in trending hashtags on Twitter, most notably, sharing an image of a decapitated head, with the caption, “This is our ball,” using the hashtag, #WorldCup. Their social media recruitment tactics have apparently been so successful, not only in sharing gore, but sharing photos of themselves in lavish homes they have captured, that they began attracting people going to Syria for the “wrong reasons.”

Their glorification of violence on Twitter, however, likely attracts the “right” kind of people ISIS are looking for – people who are willing to die for their cause. An extensive amount of propaganda is published in English, as ISIS makes a concerted effort to expand its foreign ranks. The sheer success of ISIS’s recruitment social media machine, and its ability to flood social media networks with its message, is a compelling argument for the #ISISMediaBlackout campaign, depriving the group of a means to increase its numbers and, possibly, expand its territory. Their deliberate and aggressive use of social media has offered ISIS a network of followers willing to translate, publish and disseminate their content.

Foley’s death has brought with it a more mainstream awareness that Twitter, and by extension its users, are in essence, performing a public relations role for the terrorist organization. The #ISISMediaBlackout campaign calls on social media users, and on mainstream media, to refrain from sharing content published by ISIS. A distinction needs to be made: The campaign does not encourage a complete lack of interaction with the group or reporting on them—an impossible and detrimental feat to ask of mainstream media and analysts. The Twitter user credited with starting the hashtag, @LibyaLiberty, explains it succinctly:

The campaign calls on users to refrain from becoming a cog in ISIS’s propaganda machine. As another Twitter user pointed out, ISIS thrives on the attention, and depriving them of that attention is a small piece of the puzzle. The problem with most ‘slacktivism’ campaigns is that it often asks of a user to do something that will have little impact. In the case of the #ISISMediaBlackout, the campaign instead asks of people to refrain from an action—to leave a vacuum where ISIS’ cruel videos and images once existed. Even LiveLeaks, a website known for its strong stance on the free sharing of graphic content, decided to stop posting any additional ISIS executions to prevent “descending into some grotesque “beheading of the week” scenario.”

ISIS and its brutality is a horrific accident on the side of the highway, and the world appears unable to look away. Addressing the nation after Foley’s death, President Barack Obama said, “From governments and peoples across the Middle East, there has to be a common effort to extract this cancer so that it does not spread. There has to be a clear rejection of this kind of nihilistic ideologies. One thing we can all agree on is that a group like ISIL has no place in the 21st century.” One way in which the world can do this is to deprive them of the exposure they gain with each link, image, or video shared on Twitter.

Nancy Messieh is an associate director and editor of the EgyptSource blog with the Atlantic Council’s Rafik Hariri Center for the Middle East.