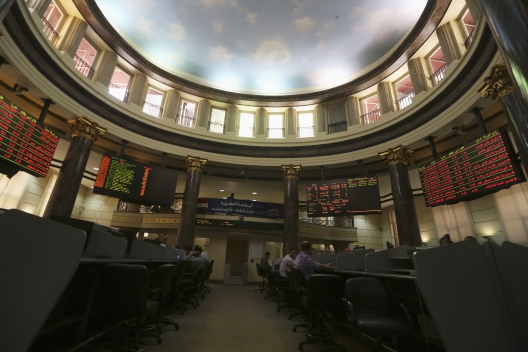 Despite the political and economic issues that continue to plague Egypt, the country’s benchmark stock market index, the EGX 30, was up 32 percent (or 28 percent in USD-terms) in 2014. This led not only regional markets but outperformed nearly all major markets globally, lagging only behind exchanges in Argentina and China.

These returns reflect a nearly 90 percent bounce back from lows following the dismissal of Mohamed Morsi and his government in July 2013, and even exceed levels prior to the 2011 revolution by roughly 25 percent. The rallying market is an indicator of a highly optimistic investor community. Returns on the EGX 30 were even higher just a few months ago, but have since fallen in the wake of a downturn in regional markets, in the face of plummeting oil prices.

Improvements in market fundamentals extended well beyond just strong returns.  Volume traded during the year was at the highest level on record, with 57 billion shares traded in total, a nearly 100 percent increase from 2013. Strong volume coupled with a rising market is a positive sign of robust investor demand and sustainable markets levels. Record high volumes were also recorded in the government bond and the nascent corporate bond markets as well.

The upswing in investor sentiment drew companies back into the market as well, in the form of new listings and rights offerings, both of which are forms of equity financing options (i.e. offering stock to investors). With financing options all but dried up in the years following the 2011 revolution, the improved investor conditions provided companies with the financing options needed to grow their businesses. Between the EGX (the main exchange) and the small capital sister exchange, the Nilex, thirteen new companies were listed, offering stock to investors. This represents 1.9 billion Egyptian pounds in added market value, a substantial increase over 2013.

An uptick in merger and acquisition activity is another indicator of improving market conditions. The flurry of domestic acquisitions coincides with a growing interest in the Egyptian market by foreign firms. Among the most high profile deals of the year pitted Kellogg, the American multination and the world’s largest cereal producer, against the and Dubai-based private equity firm the Abraaj Group, for a stake in Egyptian confectionary producer Bisco Misr. The bidding war that ensued fascinated many Egypt-watchers as two prominent international power players vied for a position in Egypt’s fast-growing consumer goods market. Bidding ended on January 11, with Kellogg buying 86 percent of the company for $125 million, after bidding up the price by more than 20 percent. Similarly, the Egyptian cheese maker, Arab Dairy, is a takeover target of Lactalis, Europe’s largest dairy group, and local brokerage firm, Pioneers. The bidding war, which is expected to close January 22, has also attracted interest from firms in Denmark and Saudi Arabia.

The overall improvements in the stock market can ultimately be translated to a show of investor confidence in the direction of the economy, driven by the policies of President Abdel Fattah al-Sisi. Under Sisi’s leadership the government has implemented key fiscal reforms, which include long overdue energy subsidy and tax reforms, ramped up development efforts, and increased security – albeit, in the face of growing concerns surrounding human rights issues in the country.

The implementation of these reforms was the rationale behind the recent upgrades at credit rating agencies, Fitch and Moody’s, both of which changed their outlooks on Egypt’s economy to stable. The IMF seconded this sentiment in a late November statement following a recent mission to Egypt, lauding the government’s policies being put in place and noting the economy is finally improving following four years of stagnation.

Both the IMF and the Egyptian government forecast a pickup in economic growth in FY 2014/15 to 3.8 percent, up from around 2 percent where GDP growth has hovered since 2011, while Finance Minister Hany Kadry Dimian stated in October that projected economic growth over the next three years is targeted between 4 percent – 5.8 percent. The elevated growth forecasts coupled with an increase in stability have left many Egypt market-watchers feeling bullish. One local brokerage firm, Pharos Holding, forecasts the EGX 30 will reach 10,500 in 2015, up 18 percent on the close of 2014. However, predicting stock market outcomes is often times a fool’s errand, especially in a market as volatile as Egypt’s.  At the very least, 2015 will mark an eventful year in Egypt with a number potential market-moving events on the horizon, including parliamentary elections, the outcome of the economic summit in March, and the implementation of key development initiatives like the Suez Canal development project. Regional issues will also weigh on investor sentiment in Egypt. Neighboring Gulf oil exporter markets will continue to face pressure as oil prices spiral downward and political turmoil and conflict in the region will keep many investors at bay. Globally, sluggish growth remains a concern stemming from economic slow downs in China and Europe. How Egypt’s market will shape up in 2015 is anyone’s guess, but at the very least investors are coming out the gate more optimistic than they have been in years.