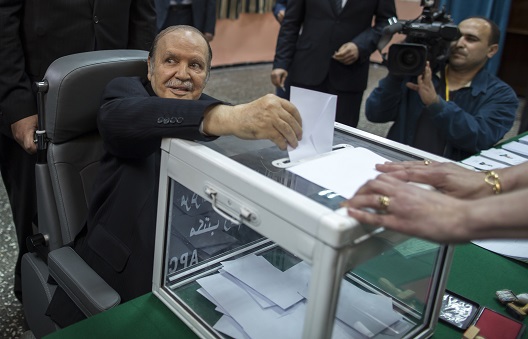 Today is Election Day in Algeria and analysts predict that the aging and ailing incumbent President Abdelaziz Bouteflika stands to win yet another term in office, effectively making him president for life. The political space has remained closed since the government canceled the country’s first democratic elections in 1991, which Islamists were poised to win. What potential that presented itself for change at the time of the 2011 uprisings elsewhere in the region the government quickly quashed.

Kamal Benkoussa, an Algerian politician who recently withdrew from the presidential election race, talks to Richard Nield about another missed opportunity for a representative and open Algeria and the dangers inherent in yet another Bouteflika term.

What does this election mean for Algerians?
Algeria is on the brink of a major crisis. The election will keep in power a regime that has no legitimacy and no connection with the people of Algeria. In fifteen years, this regime has consistently failed to represent the interests of Algerians, and despite investment of $600bn, the national economy has been so poorly developed that it is on the point of collapse. At the head of the regime stands a man who is so ill that he cannot run his own reelection campaign, and was incapable even of announcing for himself his intention to stand in the elections.

Why did you decide to run in the elections?
My life has taught me that while there are often difficulties, nothing is insurmountable. I had a new vision for Algeria, one that had at its center democracy, rule of law, and economic development of the kind that would benefit the whole population. I believed that my young candidacy could be a threat to a regime led by a man coming to the end of his life.

What made you withdraw?
In the months of my campaign, it became more clear to me than ever how atrophied this regime has become, and what a struggle it is for anyone to stand against it. The regime has such a tight grip over the machinery of electoral politics that no one can possibly succeed without its backing. I experienced at first hand some of the many mechanisms used by the regime to stand in the way of opposition candidates.

When it was announced that President Bouteflika would stand for reelection, I knew that my campaign was in vain. I withdrew my candidacy in order to stand beside those campaigning against the president’s fourth term and calling for an end to the current political system.

What did the regime do to hinder your campaign?
All of my scheduled meetings with Algerian citizens and civil society groups were canceled, with authorities citing a threat to national security. The associations with which I planned to meet were threatened with losing their government funding if they met with me.

Activists working on my behalf were summoned by police and ordered to stop collecting signatures in support of my campaign or there would be reprisals. The state administration refused to certify those signatures we did gather, claiming that it could not do so without explicit instructions from the ministry of the interior. The local press, which is dependent on printing works owned by the state, was reluctant to publicize our campaign, meaning that we had to use foreign news outlets.

Do you expect the elections to be free and fair?
The regime has long since decided that the coming election will not be free and fair. President Bouteflika beat all records for collecting the signatures he needed to stand for reelection. The machinery behind the regime ensured that more than four million signatures were collected in just eight days, all while the president was too ill to even announce his own candidacy. Now the president’s representatives within the government are warning Algerians against any criticism of this ghost campaign.

In recent weeks, rallies in favor of a boycott of the elections and against a fourth term for President Bouteflika have either been prevented from going ahead or been met by a huge a police presence. The regime is consistently denying Algerians their right to peaceful protest and their right to speak out against all the injustices they are suffering.

Instead, the regime is labeling the democratic aspirations of its people as a source of instability, claiming that they undermine a balance of power that was agreed decades ago and remains untouchable today. Our fundamental rights are being flagrantly abused, and the people are forced to survive in any way they can during this deliberate disintegration of civil society.

What effect has this had on Algerian society?
What I realized more than ever during my campaign is that this long period of suffering has become ingrained in the national psyche of Algeria’s citizens. Algerian society has been stripped of its substance to the point that its people no longer dare to assert their right to exist. Feeling completely powerless in the face of the system, they have withdrawn from politics completely. There has been a kind of collective civil suicide.

In Algeria today, the regime wants to forbid us to think, much less be. The current regime, put in place to manage a state of emergency that emerged from the civil war in the 1990s, has forgotten that it has a responsibility to govern on behalf of the Algerian people. The infantilization of an entire people is such that their collective intelligence is being publicly insulted. With no sense of irony, the regime is promising better horizons at the same time as renewing a presidency that is already dead.

How serious are Algeria’s economic problems?
The fundamentals of Algeria’s economy are dangerously weak. The country is dependent on oil and gas for 97 percent of its export revenues, but hydrocarbons production has been declining for several years. Despite introducing economic stimulus packages totaling an astronomical $600 billion, the regime has completely failed to reform or diversify the economy.

Today, public expenditure amounts to more than 40 percent of GDP, and the budget deficit is more than 18 percent. The oil price needed to balance the state budget increased from less than $60 a barrel in 2006 to $143 a barrel in 2012. A corrupt, unwieldy and highly uncompetitive public sector, an almost non-existent private sector, and a totally unbalanced economy have meant that even with oil and gas sales, GDP growth has remained at just 3.5 percent.

Algeria imports almost all of its basic goods, and is one of the largest wheat importers in the world. While oil revenues have fallen, imports expenditure has increased from $40bn in 2009 to over $60bn today. With a population that is expected to grow from 38 million to 50 million people by 2025, and the entry into the market of more than one million new job seekers in the next 10 years, it is more urgent than ever to structurally reform our economy. If this does not happen, the Algerian people will no longer suffer in silence. There will be chaos.

How have Western governments reacted to the political process in Algeria?
The reaction among Western democracies has been a deafening silence. At a time when the United States and Europe are vocal in their support for the people of Ukraine, they have said nothing in response to a farcical Algerian election to anoint a monarchical president. At the end of March, just three weeks before the elections, US Secretary of State John Kerry made a visit to Algiers as part of a ‘strategic dialogue’ between the two countries.

Is this the West’s way of legitimizing an openly dictatorial regime for the sake of military and business relations, or is it a clumsy omission? Could there be any greater injustice for the Algerian people than the elevation by developed democratic nations of their own commercial interests over the fundamental freedoms that are the very bedrock of their own countries? Are military and security questions our only point of diplomatic convergence?

What is your vision for the future of Algeria?
The people of Algeria deserve a country in which they can be free to pursue their aspirations. We need to build a state in which the rule of law is supreme, institutions are transparent, our economy is free and our elections are fair. Our government should be bound by a constitution determined by the people it governs. I want to see our country become a regional player, to find its proper place in the diplomatic world, to regain its confidence and pride. I want to help build a more just and prosperous society, so that Algeria can become the great nation that it has the potential to be.

This dream is eminently realizable, but our voice needs to finally be listened to in Washington and across Europe. For now, unheard and unsupported, the people of Algeria continue to suffer in silence.

Richard Nield is a freelance Middle East journalist and specialist in Algerian politics.

Image: Algeria's President Abdelaziz Bouteflika casts his ballot during the presidential election in Algiers April 17, 2014. Algerians voted on Thursday in the election Bouteflika is expected to win after fifteen years in power, despite speaking only rarely in public since suffering a stroke in 2013. (Photo: REUTERS/Zohra Bensemra)