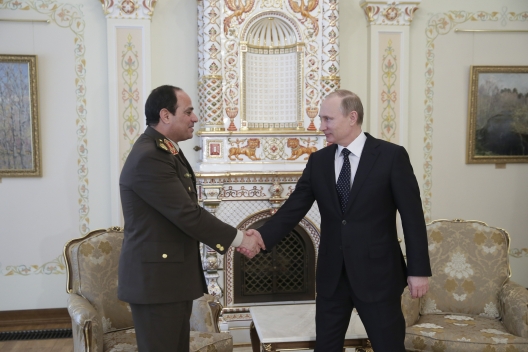 Abdel Fattah al-Sisi’s election as president—which President Vladimir Putin indicated his support for when the two leaders met this past February in Moscow—will see a deepening of the Russian-Egyptian rapprochement that these two leaders have already begun.  Moscow is pleased that Sisi has ended Egyptian support for the Syrian opposition against Assad that ousted President Mohamed Morsi exhibited.  Putin is also happy that Sisi has not sided with America and other Western states in opposing the Russian annexation of Crimea or Moscow’s policy toward Ukraine.  Sisi, for his part, values Putin for (unlike President Barack Obama) not criticizing the Egyptian military’s crackdown on the Muslim Brotherhood and other opposition groups.

One sign of Putin’s desire to court Sisi is the recent agreement for Gazprom to supply liquefied natural gas (LNG) in 2015 to Egypt’s EGAS at below market rates and with generous financing terms.  Various forms of Russian-Egyptian military cooperation, including a Saudi-financed arms purchase, have also been reported to be in the works.  Some have even speculated that Sisi is turning away from Washington and toward Moscow.

It is doubtful, though, that Sisi sees Moscow as a replacement for Washington.  Instead, he may be holding out the prospect of increased Russian-Egyptian military cooperation as a means of inducing the Obama administration to reverse its cutback of American arms transfers to Egypt in response to Sisi’s crackdown on his opponents.  If so, this plan appears to be working, as Washington’s recent decision to deliver ten Apache helicopters to Cairo suggests, although Congress continues to pressure the White House to withhold delivery

Moscow, though, may not be seeking to replace Washington as Egypt’s principal ally.  Russia is neither willing nor able to provide anywhere near the same level of support to Egypt that America does.  Putin may instead be satisfied just to have improved economic and military ties to Egypt.  This alone will go a long way toward raising Moscow’s profile in the Arab world.  Like Sisi, there are many other Arab rulers who prefer Putin’s unashamed support for authoritarian order to Obama’s unsettling (albeit inconsistent) concern for human rights and democratization.  If (like Sisi) other Arab leaders make greater efforts to cultivate Moscow just to get more support (and less criticism) from Washington, this would further Putin’s efforts to get Russia taken more seriously—including by the United States.

The limit of how far Russian-Egyptian relations can improve, though, may be defined less by the United States than by Saudi Arabia.  Saudi-Russian relations remain sharply divided over several issues (including Syria, Iran, and the treatment of Muslims inside Russia).  While Riyadh may indeed be  willing to buy Russian arms for Egypt, the Kingdom appears to be doing so in the hope of  inducing the Obama administration to reverse its cutback on American arms transfers to Egypt. It is doubtful that the Kingdom would want Cairo to make a major switch from relying mainly on American arms to relying mainly on Russian ones.  Riyadh would certainly not pay for anything like this. But if major gas deposits could be developed in Egypt or off its coast, then Cairo would not need Saudi aid in order to buy Russian weaponry.  Perhaps it is the hope both for the possibility of such a find as well as the desire to get in on it that accounts for the generosity of Gazprom’s terms in its recent deal to sell LNG to Egypt.