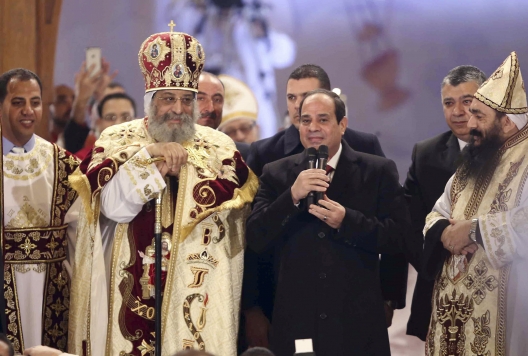 Without any prior announcement, and only a few hours after his return from an official two-day visit to Kuwait, President Abdel-Fatah al-Sisi further won the hearts and minds of the country’s Coptic Christian minority when he became the first Egyptian president to attend the mass celebrating Eastern Orthodox Christmas on January 6.

Relations between Sisi and Egypt’s nearly 10 million Christians were already positive as the majority saw him as their savior from the sectarian rule of former President and Muslim Brotherhood leader, Mohamed Morsi. The unprecedented visit to the headquarters of the Coptic Orthodox Church is likely to further cement this alliance, and at the same time, deepen the rift between Coptic Christians and political Islamic groups. Pope Tawadros II of Alexandria was among the few prominent figures who attended the July 3, 2013 meeting when Sisi, then defense minister, announced Morsi’s ouster. He was joined by Sheikh Ahmed Al-Tayeb, the Grand Imam of Al-Azhar, Mohamed ElBaradei, the leader of National Salvation Front, an alliance of secular parties, Galal Morra, Secretary-General of the Salafist Nour Party and a few other top military leaders.

Morsi’s ouster served only to further exacerbate existing tensions. A deep existed mistrust between the two sides due to statements by Brotherhood leaders over the years questioning Egyptian Christians’ entitlement to equal rights. In April 1997, the late Supreme Guide, Mustafa Mashhour, was quoted as saying the country’s Christians should pay jizya, a tax historically paid by non-Muslims as a price for the state’s protection. He also said Christians should not be allowed to join the army, saying that as a country with a Muslim majority, the main task of its army was to defend Islam. Shortly after Morsi became president, and his adoption of a constitutional declaration that gave him wide powers in December 2012, massive protests came out against his rule. Khairat al-Shater, the first deputy of the Brotherhood’s General Guide, charged that “the majority of protesters who surrounded the Presidential Palace were Christian.” During the pro-Morsi Raba’a al-Adaweya and Nahda sit-ins, fiery speeches were made from the podium, threatening Pope Tawadros II and Coptic Christians due to their support for the “military coup.” On the day of the violent dispersal of these sit-ins, nearly seventy churches were attacked or burned all over Egypt, with many attacks taking place in the southern provinces in particular, where the majority of Copts are concentrated.

As president, Morsi himself lost an opportunity to improve relations with Egypt’s Christians when he failed to attend Christmas mass. Instead, he sent two senior officials representatives. Worse, Brotherhood leaders and other extremist political Islamic figures, debated in the media whether congratulating Christians over Christmas was allowed, according to strict Islamic teachings.  Several scholars, including leaders of the Salafist Nour Party, such as Yasser Borhami who now supports Sisi, claimed that congratulating Christians for Christmas was contrary to Islamic teachings because it was a recognition of their religion.

It is the very rise of extremist ideas in Egypt over the past few decades that makes Sisi’s visit such as a significant event. While the late President Gamal Abdel-Nasser enjoyed a positive relation with Pope Kyrollos, the leader of the Coptic Church at the time, and personally laid the foundation for the Abbasseya Cathedral in 1965, he never attended Christmas mass. When late President Anwar Sadat succeeded Nasser in late 1970s, relations soured with the Coptic Church, which had gradually come to represent the majority of Egypt’s Christians in all dealings with the state. Sadat wanted to shift alliances from the former Soviet Union to the United States, and encouraged the rise of political Islamic groups in order to weaken the influence of leftist and nationalist groups. He released prominent Brotherhood leaders that Nasser had jailed, and in the sole visit he paid to the Coptic Cathedral in 1977, he made a point to perform Islamic prayers inside the Church together with a number of senior aides. Sadat described himself as a “Muslim leader for a Muslim country.” He clashed openly with late Pope Shenouda III when the latter refused to support his controversial visit to Jerusalem in late 1977, and the signing of the peace treaty with Israel in 1979. Shortly before his assassination in October 1981, while having no jurisdiction over the church’s hierarchy, Sadat ordered the removal of Pope Shenouda from his position as leader of the Coptic Church and placed him under house arrest in a monastery in Alexandria. Under Sadat, sectarianism thrived: there were repeated attacks against churches, and hardly any new Christian churches built.

Former President Hosni Mubarak sought to improve the ties with Copts damaged under Sadat. He visited the headquarters of the Coptic Cathedral twice, but only to offer condolences over the death of two prominent Christian figures, including an army officer. He met repeatedly with the late Pope Shenouda III, but Christians continued facing difficulties in obtaining permits to build churches, and were consistently excluded from top government, army, and police positions. Many analysts believe that Mubarak was avoiding a direct confrontation with extremist political Islamic and Salafist groups by maintaining the image created by his predecessor: that he was “a Muslim leader for a Muslim country.”

Sisi received a very warm reception from the thousands of Copts in attendance. Stepping into the Cathedral from a side door, accompanied only by newly-appointed Intelligence Chief, Khaled Fawzy, he was greeted by ululations and chants of, “We love you Sisi,” and “Muslims and Christians are one hand.” Sisi delivered a short speech in which he congratulated the attendees, and asked them, “to remain united as Egyptians. I say Egyptians and not Muslim or Christians. We need to love each other correctly. We need to love each other truly.”

Sisi did not attend the entire mass, and his visit barely lasted ten minutes. However, it was very well received among Copts, as well as his secular supporters. Sisi himself is known as a conservative religious man, often resorting to religious rhetoric in his speeches. Yet, at a time he has been facing daily demonstrations by Brotherhood supporters over the past nineteen months, he is clearly not in a position to lose any allies. The second day after his visit, nearly all top government officials followed suit, heading to the Coptic Cathedral to visit Pope Tawadros II.

Mohamed Abul-Ghar, leader of the Egyptian Social Democratic Party, praised Sisi’s move, describing it as “unprecedented.” He added, however, that it was not enough to show good will towards Christians. “We need to take other steps to assure that Christian Egyptian citizens are enjoying their full rights. This includes approving a new law on building churches, as well as reviewing our school programs to stress values such as citizenship and equality. All jobs must also be open for Coptic Christians, depending on their qualifications.”

Pope Tawadros himself has not been shy in expressing strong support for Sisi, saying he saved the country from civil war. In a recent interview he gave to a Spanish newspaper, El Mundo, he also called for Mubarak’s release because of his age, angering revolutionary youth groups who supported the January 25, 2011 Revolution. Pope Shenouda III advised Coptic youth not to take part in the anti-Mubarak protests, and the recent statements made by the new Pope simply confirm that he has sided with the old conservative establishment that did not see democracy or revolutionary changes as a priority. Echoing similar statements made by Sisi during his election campaign seven months ago, Pope Tawadros said in his recent interview that, “Egypt needed at least twenty years to reach true democracy, because building democracy comes from the bottom to the top through small gradual doses that start in the classroom.”